Where To Eat Korean Food In London

Having evolved over hundreds of years to suit both Korea’s natural resources and agricultural traditions, Korean cuisine is finally, and deservedly, making its way to the limelight in London. Both traditional dishes and modern adaptions are popping up all over the city: here, we list five of London’s best Korean pit-stops. 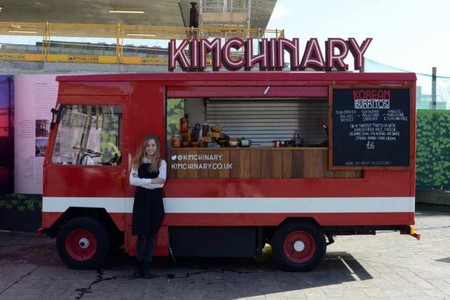 A refreshing and innovative fusion of Korean and Mexican cuisine, Kimchinary is the brainchild of Hanna Söderlund who wanted to create a street-food-style dish based around Korean samgyeopsal – grilled pork belly with ssamjang wrapped in lettuce with kimchi and pickled sides. She says that eventually, through much experimentation, samgyeopsal turned into Korean tacos and burritos, which she now sells from her bright red 1974 milk float. Her food is available at various food markets, and her services are also available for hire for private events and parties. Follow Kimchinary’s whereabouts via Twitter.

With two restaurants in the heart of London, Bibigo specializes in authentic cuisine with a contemporary twist. Their specials include Korea’s famous grill barbecue, Bibimbap bowls of rice, vegetables and tofu or meat, and spicy Ramyun noodle bowls. They even offer innovative Korean cocktails that are all soju based, as well as wines and non-alcoholic drinks including iced tea. Their food is truly an art-form, and you simply cannot visit without ordering the Bibigo goldfish, a goldfish-shaped Korean waffle filled with red bean cream and vanilla ice cream. 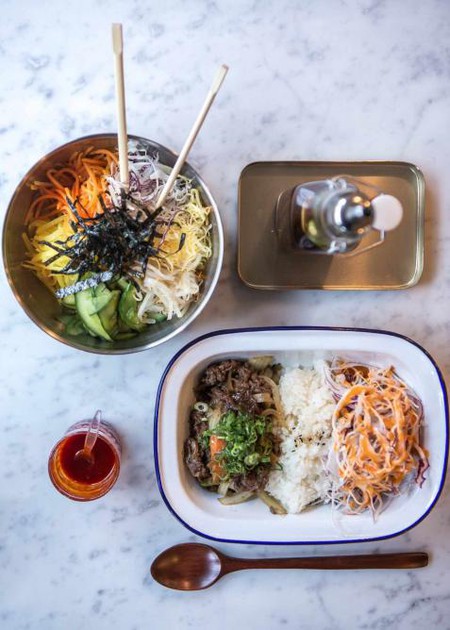 On the Bab, Bibimbap

On The Bab offers Korean street food and takeaway. Available in both Shoreditch and Covent Garden, On The Bab serves traditional Korean drinks, including soju based cocktails and shooters (a distilled alcoholic drink comprised of ethanol and water), wine and tea, as well as a mixture of innovative and traditional Korean cuisine – all in an effortlessly cool setting. They subscribe decidedly to the Korean tradition of anju, whereby you enjoy Korean food alongside alcoholic drinks, making this Korean bar-cum-restaurant one of the most popular Korean eateries in the city.

One of the most modern Korean eateries in London, Bibimbap offers a contemporary take on the traditional bibimbap. There are 10 variations of bibimbap available, including seafood, spicy pork and kimchi. They also serve salads, noodles and soups. Their philosophy is tasty, healthy and affordable Korean food – perfect for a short lunch break or quick bite with friends.

Asadal is Korean restaurant with a real emphasis on Korean cultural and traditional practices when it comes to their ingredients and techniques. Their menu offers plates and set menus with options such as Korean barbecue, bibimbap, bul go gi, and hot pots.