The 5 Best Day Trips From London 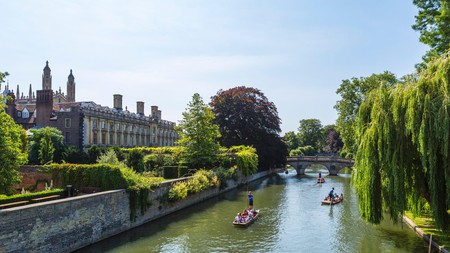 Sometimes you need to escape the hectic hum of the city and seek greener pastures. Thanks to the network of railway lines and roads splintering out from central London, you can easily whisk yourself away to the English countryside or a rural town for a much-needed break. You can use this time to discover the multitude of delights that the surrounding areas have to offer.

Brighton‘s seaside location, thriving LGBTQ scene and pulsing neon-tinted nightlife have long proved a magnet for day-trippers. Rain or shine, the artistic haven is regularly brimming with crowds looking to explore its individualistic fashion boutiques or kick off a night out at one of the retro, steampunk-inspired or beachfront bars.

Situated in the holiday hive of Dorset, the coastal town of Bournemouth is home to bewitching Gothic Revival architecture, the grand Art Deco Pavilion Theatre and a pier packed with high-adrenaline activities. Days can be spent on the beach digging into classic fish and chips and gazing out over its matcha green-tinted waters, while nights belong to the technicolour clubs and their bouncing revellers.

Cambridge initially served as a Viking trading centre, attracting traders with its network of rivers and access to the sea through Ely. It is now better known for its highly esteemed university (which was founded in 1209 by Oxford scholars fleeing hostile townsmen), and the present-day city is a charming mix of museums, live music venues and centuries-old architecture.

Bath is tailored to pleasure-seekers and history-lovers with its famously soothing waters and romantically Austen-esque Georgian architecture. The city owes its name to the Roman Baths – initially built in AD 70, the honey-coloured ruins (still brimming with water) now attract visitors from across the country. If you’re looking for a more contemporary spin on the ancient tradition, spend an afternoon at Thermae Bath Spa where you can float in natural hot spring water in a rooftop pool with sweeping city views.

Oxford is a striking jigsaw of English architecture, featuring every style since the medieval Anglo-Saxon times. Among the diverse variety of structures lies one the oldest universities in the world, known for educating a plethora of Nobel Prize Winners and famous figures like Oscar Wilde. The city’s storybook setting has also been brought to life on the pages of timeless books like Brideshead Revisited (1945) and the His Dark Materials trilogy.