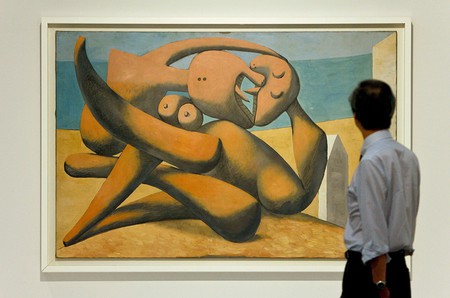 The 1920s and ’30s saw the emergence of a series of seminal new European art movements, including Art Deco, Cubism and Surrealism, among others. Culture Trip takes a look at some of the most important artworks from these two defining eras.

Missouri-born artist Thomas Hart Benton pays homage to his adoptive city of New York in this oil composition, presenting a bird’s-eye view of Madison Square Park. Internationally renowned as a pioneer of the regionalist art movement, Benton studied urban space within New York, Early Twenties (1920-24), depicting moving people who are painted as dark matchstick figures. Filing neatly past stationary vehicles, these figures weather the dark storm forming above the imposing skyscrapers and American flag. The tempestuous climate is set during a period of personal and professional unrest for Benton as a leftist sympathiser. 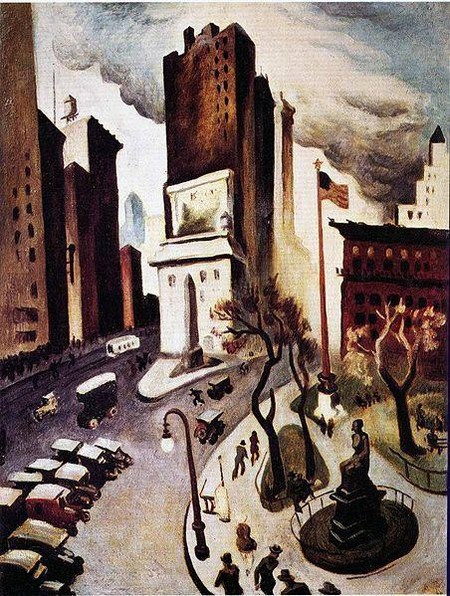 Will Longstaff’s depiction of the Menin Gate war memorial in Ypres (also known as Ghosts of Menin Gate) forms part of a collection at The Australian War Memorial in Canberra. The composition captures the spirits of soldiers marching in unison across a cornfield under an indigo evening sky. After attending the unveiling of Menin Gate in July 1927, Longfield claimed to have had an apparition of the steel-helmeted troops. The artist went home to London and completed his tribute in one sitting. The red poppies in the foreground represent the blood shed during World War I and the limestone memorial on the left shows a dark, sinister entrance. Buildings are dotted upon the far horizon (with intermittent light) suggesting that the area is under close scrutiny. 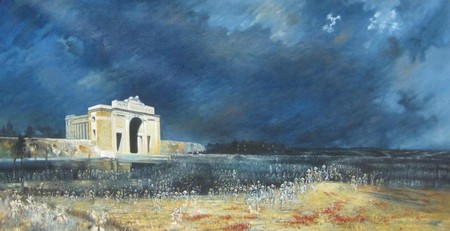 Edward Hopper’s picture of social realism is comprised from a composition of multi-coloured geometric rectangles and depicts a scene within a Chinese restaurant. In the centre foreground are two women (both believed to be based on Hopper’s wife, Josephine) who appear to have an ambiguous relationship. They mirror each other’s solitary and aloof demeanour across a bright table in green and purple cloche hats. There is no tactile interaction, and the lady in green hides her hands in a defensive manner under the table, suggesting uneasiness. The four figures depicted are meeting for a social event, but the irony lies in a mutual lack of interest and spontaneity, which leaks through their detached facial expressions. A man in the background talking with a female friend seems to enjoy his cigarette more than his date. Hopper catches the each person’s loneliness despite them being in a public, open space. A mixture of natural and artificial light is seen throughout the composition; the sun reflects off the billboard directly onto the white tables and the woman in green, giving her a ghostly pallor. 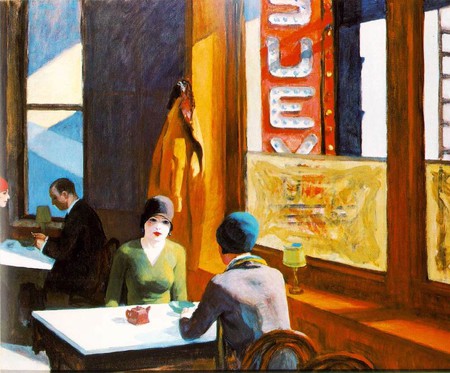 Funded by the Mexican government, Diego Rivera’s mural took six years to complete, and can be found in the stairwell of The National Palace (Palacio Nacional) in Mexico City. Diego presented a narrative to the public which sympathetically portrayed Indians as the oppressed minority, brutalised by the Spaniards. Comprised of four sections, the largest mural pieces stand at 70 metres (229.7 feet) by 9 metres (29.5 feet). The North Wall is dedicated to a representation of Aztec culture, incorporating a symbolic sun (the centre of Aztec religion) with a pyramid and an Aztec leader underneath it. The West Wall depicts the history of warfare, with Cortes and the Spanish armies defeating the opposing forces of the Indians and Aztecs. The South Wall represents all that Rivera loved and was inspired by, from the Red communist flag to socialist Karl Marx and artist and wife Frida Kahlo alongside her sister Cristina (Diego’s one-time lover). School children are represented in the section, symbolising peace, unity and future progress in society. 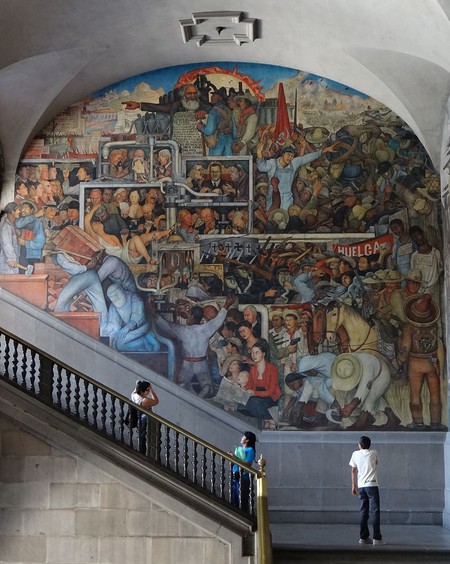 Taking inspiration from Freud and his teachings of psychoanalysis, Salvador Dalí created this surrealist in the early 1930s. A soft melting watch limply hangs off a tree branch in the left foreground, perhaps demonstrating that time is bent out of all proportion. The slug in the centre foreground is representative of Dalí’s distinctive profile, a figure overwhelmed by time, framed by insect-like eyelashes. Dalí’s trademark use of ants on the face of a clock in the left foreground emphasises the sense of decay and destruction upon the barren landscape. Dalí incorporates the rugged landscape features of the Cap de Creus peninsula and Mount Pani from his native Catalonia. Originally displayed in the Julien Levy Gallery in 1932, The Persistence Of Memory (1931) has been displayed at The Museum of Modern Art, New York City, since 1934. 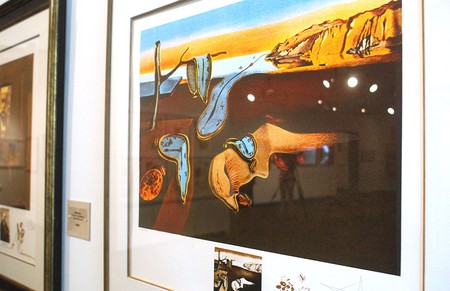 Mandatory Credit: Photo by JENNIFER LONG/AP/REX/Shutterstock (6396590a) Salvador Dali's "Persistence of Memory" lithograph is shown at an exhibit in Fort Worth, Texas, . To commemorate what would have been the Spanish artist's 100th birthday, the Salvador Dali Gallery in Pacific Palisades, Calif., is showing and selling more than 600 pieces at the Fort Worth Community Arts Center starting Friday through June 27 DALI SALE, FORT WORTH, USA

Fire at The Full Moon (1933) was produced by Swiss-German artist Paul Klee during a period of socio-political unrest across Europe in relation to the succession of Hitler as German Chancellor. As an art teacher at Düsseldorf Academy and having been presumed to be Jewish, Klee suffered at the hands of Nazi soldiers, who ransacked his house. He lost his job and began suffering from scleroderma, which would eventually prove fatal. The rich composition of Fire at The Full Moon is constructed through a cubic, geometric tapestry of heavy, coloured blocks representing the vast fields of countryside. A large yellow sun dominates the vibrant landscape overhead in the top left hand corner. A bright red cross in the top right of the frame has the dual purpose of representing The Red Cross while also standing apart as a large ‘headstone’, signifying death. 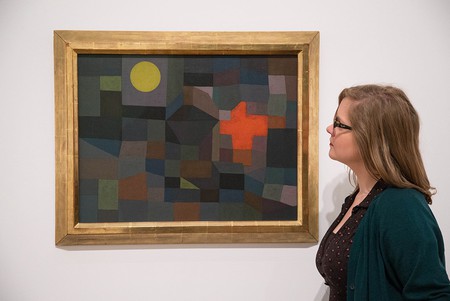 Photographer Dorothea Lange perfectly captured the worry and desperation of Florence Owens Thompson, a woman who faced an uncertain future as a homeless American citizen during The Great Depression. Then 32-year-old Florence was a widowed mother and a destitute agricultural labourer. Two of Florence’s dejected children hang from her shoulders, their faces obscured. Florence looks out to her right consumed by worry, with furrowed brows, clasping her chin. This iconic snapshot is one of six that Lange took during her time at a pea-picker’s camp in Nipomo Mesa, California. 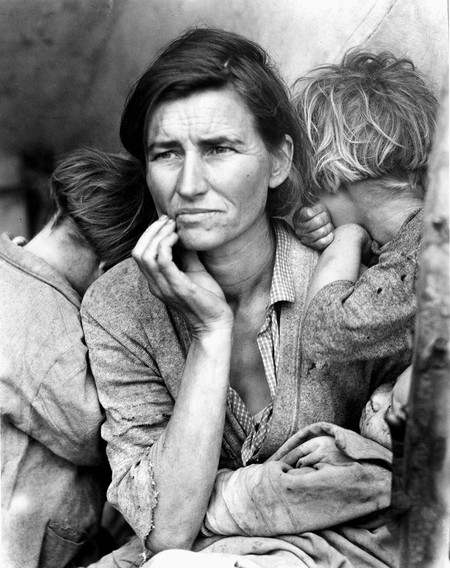 At roughly 11 feet (three metres) tall and 25 feet (eight metres) wide, Pablo Picasso’s Guernica (1937) uses monochrome blocks of grey, black and white to reflect the sombre spectre of death and destruction. This abstract composition pays tribute to the citizens killed and seriously injured by the bombs dropped in the northern Spanish town of Guernica during World War II. Terrified animals and humans are wide-eyed and opened mouthed with limbs intertwined in the attack. The pain and anguish of the victims is depicted through the shot of a mother with a lifeless child in her arms, screaming in agony at her loss. A male figure lies on the ground in the foreground underneath, his limbs mutilated by fallen ammunition, holding a broken sword for protection. The lightbulb in the top left foreground reflects the ‘artificial’ sun above the darkened landscape full of carnage and destruction. Newspaper cuttings are printed on the limbs of a terrified horse who has been lacerated with a spear in his side. A bull is caught up in the bloodshed, representing El Toro, the unofficial national emblem of Spain. 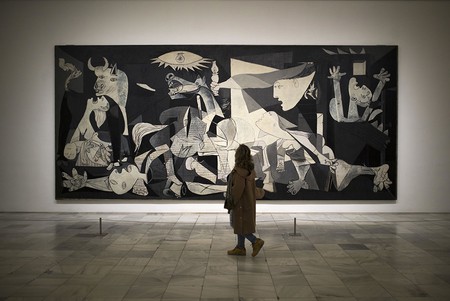 Mandatory Credit: Photo by AP/REX/Shutterstock (8562477b) A woman looks at the "Guernica" painting by Spanish artist Pablo Picasso during the "Pity and terror. Picasso's path to Guernica" exhibition at the Reina Sofia museum in Madrid, . Picasso painted his iconic artwork in 1937 to remember people who died in the Basque town of Guernica, northern Spain, during the Spanish Civil War, 1936-1939 Picasso Art Exhibition, Madrid, Spain - 03 Apr 2017

Surrealist artist Frida Kahlo’s self-portrait was created in a year of personal turmoil; she had divorced her husband Diego Rivera and had suffered other personal traumas. The two Fridas are conjoined as twins, linked together through blood supply to the heart, holding hands. On the left we see a Frida in a traditional white tehuana dress (white being the Mexican colour of mourning), covered in blood from her successful attempts to cut off her bloodline with a pair of pincher scissors. The main artery is cut off, perhaps emphasising her broken heart. She is supported by the healthier Frida, whose heart is full and whose multi-coloured clothing indicates warmth and vibrancy. Frida’s emotional angst is indicated in the background with storm clouds gathering upon the horizon. 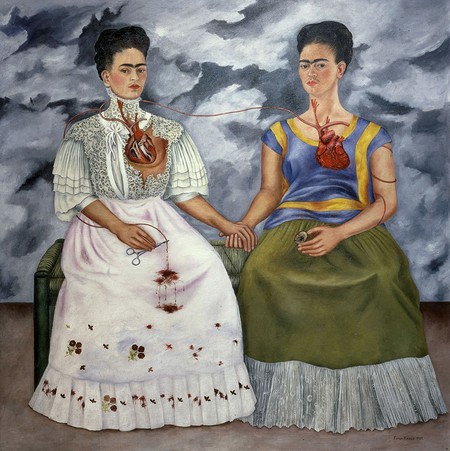 The Morning Star (from Constellations) (1939)

Catalan artist Joan Miró began a series of 23 images named Constellations in 1939 hoping to explore his fascination with power, constellations and the outer universe using astral maps (all of which provided a welcome relief from the warfare on land). Miró suggests that he would like to take the form of a bird, away from the bloodshed under the power of Nazi Germany across Europe. Forming an abstract jigsaw puzzle, small slices of primary colours are liberally weaved across the corners of the composition. The background is softly muted with a salmon pink and light blue background.