The 9 Best Kensington Restaurants You Must Visit

The district of Kensington boasts some of the most magnificent landmarks in London. It is home to the Albert Memorial, the Royal Albert Hall, the Speke Monument and Kensington Gardens. It also plays host to a plethora of outstanding restaurants, bars and other venues that set the district apart in terms of culinary endeavours. Here we’ve compiled a list of 10 of the very best restaurants in Kensington. 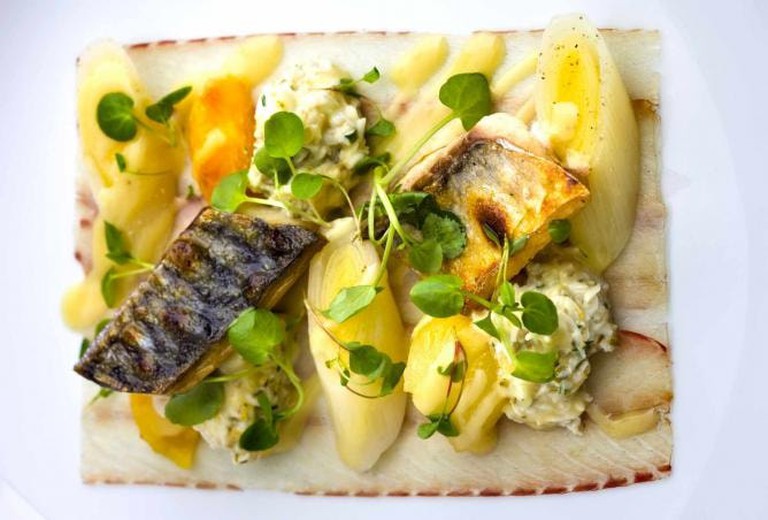 Cuisine at Kitchen W8 | Courtesy Kitchen W8
Book Now
Kitchen W8 prides itself on being the most affordable Michelin-starred restaurant in the city. In 2011 they were awarded with their Michelin star and have been able to retain it, as well as their prices, every year since. The menu consists of a combination of modern English cuisine with a ‘French soul’, with dishes such as ox tongue with barbecued beetroots, spiced carrots, sunflower and rye, and bresse pigeon with Norfolk asparagus, bulgur wheat, mousserons, hazelnut, and parfait. The quality of the ingredients used is important to Kitchen W8, so you know you’re not only getting professionally prepared food, but food that has been grown with the highest level of care. Their menu changes with the season to include light, simple foods in the warmer months, and complex, hearty dishes in the colder ones, all of which encompass a wide range to suit everyone. It’s a culmination of their lovingly considered menu, great value for money, and understated but very deliberate ingredients that allow them to ‘send you back out into the world feeling better than when you arrived’, an ethos the company is proud to live by.
Open In Google Maps
11-13 Abingdon Road, Kensington, London, England, W8 6AH, United Kingdom
+442079370120
Visit Website
Give us feedback

Launceston Place is a hidden gem despite it being right in the heart of Kensington. Head Chef Ben Murphy is so passionate about using the best produce that his constantly-changing menus offer as much local produce as the restaurant can cram in. Launceston Place received two AA Rosettes in 2017, while the wine list has won Tatler’s Best Wine List Award, the Award of Excellence from Wine Spectator magazine and Notable Wine List 2015 by the AA Guide. So it’s got quite a nice array of awards; you know your meal and wine will be top notch

For real luxury, two Michelin-starred restaurant The Ledbury really delivers. Chef Brett Graham has worked and trained under such culinary names as Liam Tomlin and Philip Howard, and has since become a world-renowned chef on entirely his own merits. The Ledbury offers courses such as Hampshire buffalo milk curd, truffle toast, and a broth of dried mushrooms, and for dessert, their olive oil cake with blood orange, white chocolate, and tea. It is their supremely unique and exclusive menu options that create such an appeal for this establishment, but it does come at a price. The Ledbury is undoubtedly an indulgent treat, but with food as extraordinary as this, you absolutely get what you pay for.

When it opened up back in 1996, the Havelock Tavern was one of London’s original gastropubs, but unlike many others that have come and gone since, it has done its best to change very little over the past twenty years. Rather than become a restaurant in an old pub building, it is more focused on being a pub that serves really good food, and that it does! The atmosphere is lively and informal so that anyone can eat, drink and feel at home, which is great if you’re looking for something a little more casual to catch up with mates over some good grub.

Restaurant, Bar, Italian
Facebook
Email
Twitter
Pinterest
Copy link
Share
Map View
Olives Restaurant is a little taste of Italy in the heart of London. Its website claims that Chef Davide Di Croce takes classic Italian dishes and combines the rustic and authentic flavours with his own unique twist. With an AA Rosette for culinary excellence, you would expect this place’s prices to be slightly higher than its lower quality counterparts, but part of Olives’ charm is that this is not the case. It serves an all-you-can-eat breakfast buffet, and a very reasonably priced full traditional English afternoon tea. To drink, it offers an extensive cocktail menu including long and short cocktails, shooters, flutes and martinis for the perfect accompaniment to dinner, or for after-work drinks that won’t break the bank.
Open In Google Maps
140 Gloucester Road, South Kensington, London, England, SW7 4QH, United Kingdom
+442073316308
Visit Website
Give us feedback 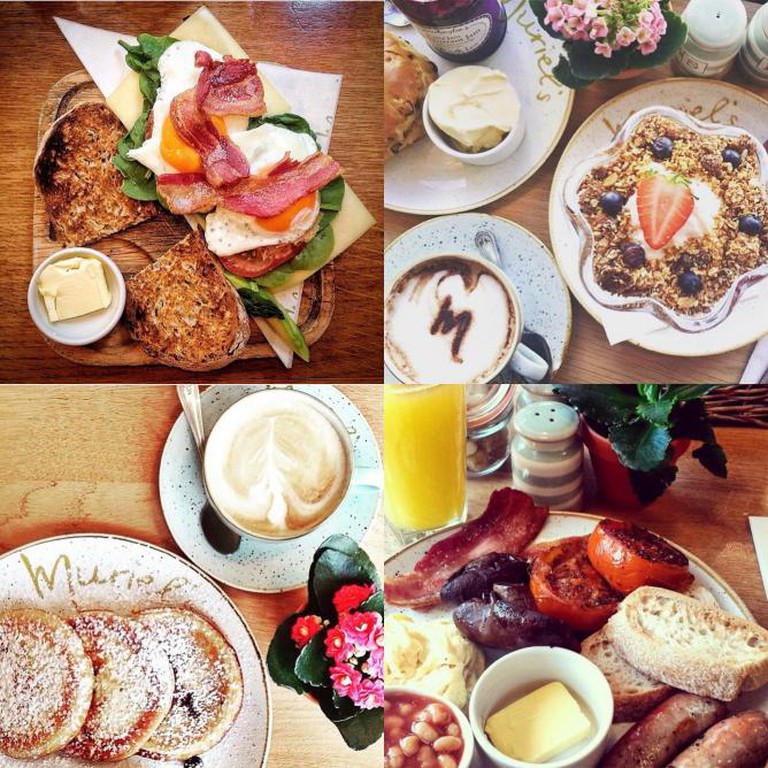 Muriels Kitchen | © Muriels Kitchen
Ffiona’s is one of the oldest family-run restaurants in London, and is a longstanding hub of great food, drink, and atmosphere. They pride themselves on providing traditional British food with a modern twist, with such dishes on offer as pan-fried duck breast with Calvados, apple and parsnip chips, and even their take on the classic chicken kiev. The Ffiona’s way is not only good food, but also good community, which is why they put so much effort into their gorgeous venue. They believe that dining in London is all too often an impersonal experience, and offer a friendly and warm service for parties of any size, be that dinner for one or for 50. Their sense of community even extends to a significant online presence, fans can follow Ffiona and the restaurant on their online blog to get the latest of menu changes, recipes, and goings-an at the establishment.
Open In Google Maps
51 Kensington Church Street, Kensington, London, England, W8 4BA, United Kingdom
+442079374152
Visit Website
Give us feedback

Bar, Restaurant, Wine Bar, Spanish, $$$
Facebook
Email
Twitter
Pinterest
Copy link
Share
Map View
There’s no better restaurant-cum-wine bar in London than the Kensington Wine Rooms, both a comfortable and relaxed bar and a functional and friendly restaurant, this place is perfect for both the discerning wine drinker, and the judicious foodie. The food in their restaurant is of a decidedly British and European genesis, and focuses on good quality, well-sourced ingredients that are simplistic and understated. At the wine bar, a selection of Spanish meats and cheeses are available to compliment your choice of wine. With an extensive selection of 150 bins, and 40 wines available by the glass, there is a wine to reflect every taste, and to compliment every dish. All the beers, gin, and vodka are brewed and distilled locally, and the delicious food includes perfectly aged Scottish beef, Gressingham duck, and acorn-fed Spanish jamon. The Kensington Wine Rooms really does accommodate all tastes and price ranges, and you can be assured you’re eating and drinking the very best food and drink available.
Open In Google Maps
127-129 Kensington Church Street, Kensington, London, England, W8 7LP, United Kingdom
+442077278142
Visit Website
Give us feedback

Restaurant, British, $$$
Facebook
Email
Twitter
Pinterest
Copy link
Share
Map View
Bluebird Chelsea is famous for its many celebrity affiliations, including Alan Carr, Gok Wan and the Made in Chelsea cast, but this restaurant is truly worth a visit on purely its own merits. The venue includes a restaurant, wine bar, café and courtyard, wine cellar and food store, and offers four private dining areas for corporate events, parties and even weddings. Their à la carte menu offers classic quality cuisine from salad and pie to monkfish and lobster, and its first-floor restaurant offers a surprisingly well-priced set menu. Its bar is advertised as a destination in its own right, and is the perfect setting to enjoy after-work drinks, offering a broad selection of luxurious wines and exciting cocktails. This affluent establishment really delivers and isn’t as exclusive as you might think.
Open In Google Maps
350 King's Road, Chelsea, London, England, SW3 5UU, United Kingdom
+442075591000
Visit Website
Give us feedback
Book Now

You’ve got to love a venue that asks you to ‘lose an evening in the finest way possible’, and that’s precisely what’s on offer at Balans. Think light bites such as ham hock croquettes or charred squid & chorizo, alongside more filling dishes like steak and eggs, kedgeree and the ever present burger. Of particular note is ‘eggs in hell’, 2 eggs poached in a tomato chilli sauce, Balans’ potatoes and parmesan. The cocktails are great too. However, if you want to really push the boat out then order the ‘Absinthe Fountain Ritual’. The fountain offers a traditional bohemian experience, using the finest La Fée Parisienne absinthe. If you do, best not to make any plans for the next day.

Casual, Relaxed, Cosy
Give us feedback