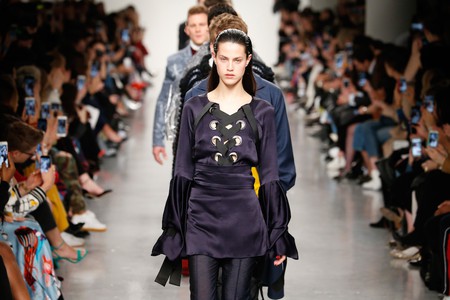 The Teatum Jones AW17 show kicked off London Fashion Week with a celebration of the human body in all its flawed magnificence.

Inspired by the work of Hans Bellmer, a German artist famous for the rebellious ‘doll project’ he created during the Nazi years, the designer duo brought imperfections and flaws into the core of their collection. In doing so, they offered an alternative to the traditional ideas of beauty, conjuring it as something beyond the airbrushed ideals so often promoted in the media, and especially by the fashion industry. In the collection, this was inherent in the clothes and casting choices, with amputee models walking alongside the traditional waif-like figures. That several models stumbled in their mesh heels added to the general sense of humanity; this was a show about people and the creative choices we make, rather than a fantasy.

Backstage at our AW17 show this morning! A huge thanks to everyone involved; so proud to have opened London fashion week for the second season! #teamtj #teatumjones #proud #lfw #fashionweek #diversity #fashionblogger #backstage

Though that’s not to say the clothes were lacking in imagination. The collection played artfully with shape and form, and highlights included sheer bell sleeves, strapped waistlines, bias-cut dresses, mesh fittings and oversized collars. Materials were layered and juxtaposed to add to the off-kilter aesthetic: PVC coating on wool, purple crushed velvet and sheer silk; see through plastic and chiffon. Throughout, large metal eyelets added a deconstructed and patchwork aesthetic to the collection, as well as hinting at an autumn trend.

Colour-wise, the collection started with dark mauves and blacks, but quickly moved to include mustard yellows, salmon pinks and cornflower blues. Geometric prints linked the separate parts of the collection together, pulling a medley of looks into one.

It was a radical move by Teatum Jones to put in practice the ideas they developed with their collection, one that signifies that designers are beginning to assume responsibility for changing the industry. Though many newer, edgier designers have long embraced street casting, their more established counterparts have been reluctant to embrace diversity in the same way.

In a speech to launch London Fashion Week, Dame Natalie Massenet, Chairwoman of British Fashion Council, said: ‘We encourage the industry to have a voice, and to show the world that we stands for inclusivity, unity and humanity.’ Teatum Jones has set a strong precedent, showing us that while the world may sometimes fall low, fashion will always go high.