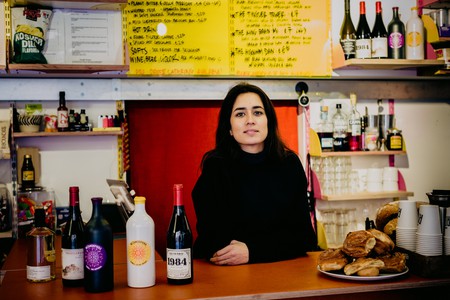 Bodega Rita’s mixologist Missy Flynn has had a big influence on London’s food scene, with a series of unique restaurants influenced by cuisine from the Americas. Here, she shares the story behind the deli’s gastronomical success and her best restaurant tips.

Missy Flynn, one of the founders of cool London restaurant concept Rita’s, now Bodega Rita’s, is a Londoner through and through. “I grew up all over London because my dad ran pubs, so we used to live above the Marquis of Granby on Chandos Place in Covent Garden, among others. I lived there when I was 12 to 13, and it really grounded me in the centre of London – when I ran away from home, I ran away to the Trocadero!”

Flynn’s upbringing in the hospitality industry laid the foundation for a lifelong passion for making things and playing with flavours, and gave her an insight into how to run a successful business. “I started to see that my dad was very good at running pubs and creating good spaces, and I think I wanted to emulate that,” she says. 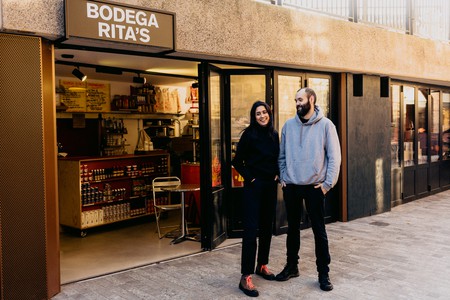 From fried chicken to fashion deli

Flynn and three partners started the very first Rita’s in 2012 when she was 23. The restaurant, which specialised in fried chicken and other North American classics, was located above Birthdays, one of the earliest nightclubs to open in Dalston’s then-emerging nightlife scene. “All the people we knew were in East London, and we wanted to open somewhere we knew people, to have that immediate support. The area was also quite underserved by restaurants at that time,” she says.

Rita’s was a success, eventually turning into a restaurant on Mare Street. When that closed in 2016, Flynn and her partner Gabe Pryce turned their focus to other projects – including a café and deli in the Browns Shoreditch fashion store. “It was an interesting experience – we’re in this shop selling cooking ingredients from Mexico alongside designer clothes, and people would come in and buy both,” she says. 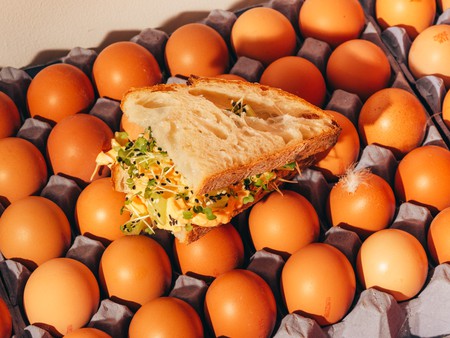 Bodega Rita’s, which serves gloriously overfilled sandwiches in mouth-watering flavour combinations alongside a diverse range of hot sauces – including hard-to-come-by Valentina condiments – was a natural next step. The bodega, a cute hole-in-the-wall shop in North London’s shopping area Coal Drops Yard, also sells natural wine, and the food is made by Pryce in collaboration with Spasia Dinkovski, a Macedonian chef who used to run a sandwich shop in New York.

“It felt like a really fun challenge for us to do, and it had to be genuine. A lot of American food in London comes across as a pastiche, and we’re English and from London – let it be London. Our references are bodegas in New York, but the shop is a lot about bringing other flavours to the fore. We have a Vietnamese sandwich, and we even go into Baltic cuisine,” Flynn explains. 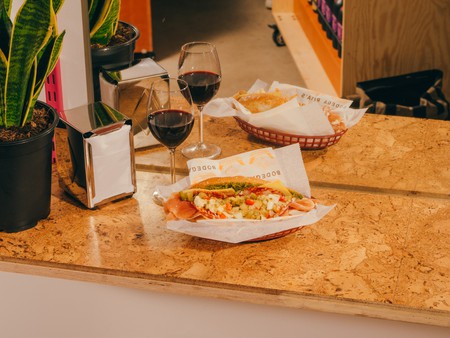 The “global deli” serves food with an influx of flavours from all over the world, and Flynn’s favourite restaurants in London are all examples of that same metropolitan diversity. Since she started studying an MA course on the anthropology of food (“It’s like they made the course for me”) at London’s SOAS, the way Flynn eats has changed. “I have to thank being at school for giving me an opportunity to explore new places – just being around people in a different demographic, from all over the world, who seek out food that reminds them of home. You get people talking in class about where to find the best Indian, Sichuan and Chinese food, and it’s very interesting to be around people who deeply value this kind of authentic cooking,” she says. 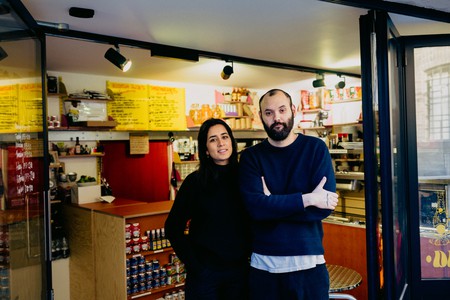 “My lunch tip is Bao in Borough, which just opened. My younger brother, Cameron, does all its drinks and wine bar. It’s got a karaoke room in the basement, and I think it’s the most fun of the Bao restaurants in London. It also has a £15 lunch deal. In Borough Market, it’s hard to choose where to eat, but since I found out about this lunch deal, it’s hands down the best option. The tingling xinjiang maitake mushroom is addictive; its prawn roll is sweet and fresh in a crispy little bun – seriously kitsch in the best way.

“Another must-try is the soft drinks and fruit highballs designed by Cameron. My favourite is the 24-hour cold brew English breakfast tea and a roasted oolong (tie guy yin), sweetened with a salted Taiwanese black sugar. Shaken with ice, it looks like a little half-pint and is just as cool, refreshing and well-matched with the food. The food is brilliant, and the staff are great. It’s located next to Elliot’s, which is also really good, and then you can go to Monmouth and get a coffee.” 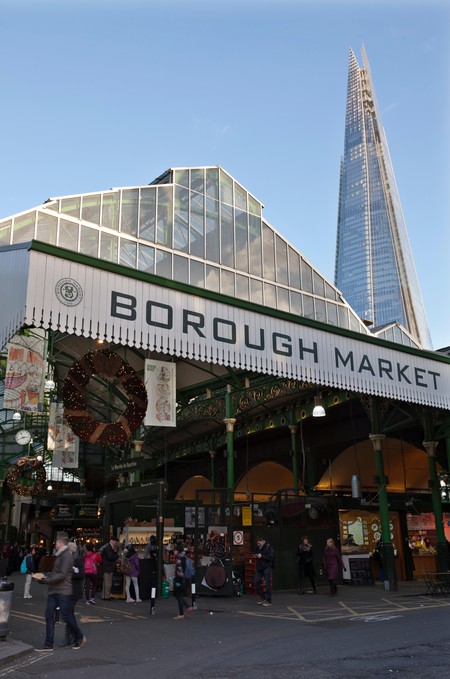 According to Flynn, the best places for Mexican tacos and Chinese baos in London are in Borough Market | © PSL Images / Alamy Stock Photo

“I’m very excited about a new place that’s also in Borough. I still think there aren’t really any good tacos in London, apart from El Pastor at Coal Drops Yard. Nick Fitzgerald, who we’ve known for a long time, used to work at Pujol in Mexico City and is one of the best Mexican chefs I know in London. He’s opening a taqueria named Padre in Borough Market, and though I haven’t been yet, I would put money on his tacos being pretty good!”

“I always stop at The French House in Soho when I’m Christmas shopping. It really roots me in Soho – you know where you are, and you couldn’t be anywhere else. I love sitting upstairs with a calvados, which I don’t really drink anywhere else – it’s one of those places where you just fall into your habits – and eavesdropping on people’s conversations here. Chef Neil Borthwick’s cooking is the kind of classic, comforting, bistro food you want in winter. I’m there for the steak and a side of aligot, chased with a calvados to keep my ears warm on the journey home.” 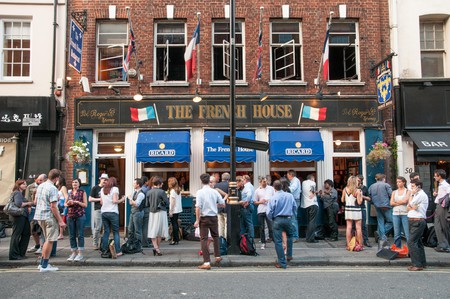 “Fortitude Bakehouse in Russell Square is a really beautiful bakery in an old stable, and the owner and head baker is an Irishwoman called Dee. She specialises in sourdough baking but doesn’t do bread. Instead, she serves sourdough cakes, fermented cakes and a lot of Moroccan-influenced spicy food, and it’s so unique. I love the Berber eggs breakfast sandwich – but honestly, all the pastry is brilliant – and it has the best coffee in the area. It’s very rare to be able to buy sourdough cakes, and there’s not that much good food close to the station.”

“I recently found out about Paolina Thai. A Thai girl on my course told me about it, and I’m worried I’m blowing up the spot with this one! It’s a very affordable, student-friendly, BYO cheap eat. It’s quite common in Russell Square and King’s Cross because there are so many universities there. I’ve just found this whole pocket of restaurants, and this is the best one. We took our staff here for dinner recently. The som tam salad is great, vibrant, crunchy and just a little bit funky. The family-run restaurant is really small, simple and special with authentic, affordable Thai food. The kitchen is tiny and reminds me of the little free-standing kitchen at Bodega Rita’s. The desserts are great – it’s a super-fun little spot – and it has a good deal for a spicy fixed lunch, too.

“I should also add Singburi Thai in Leytonstone, which is also BYO and probably more of a place to ‘discover’. Let the special board guide you for some of the most developed, authentic, regional Thai cuisine you can find in London. I have only been a couple of times, and I must go more!” 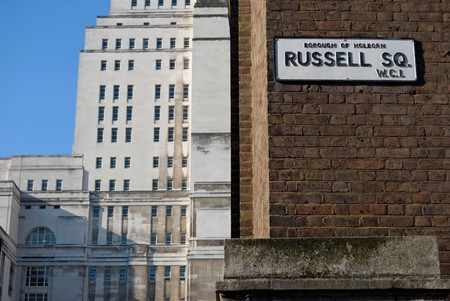 The area around Russell Square has plenty of cheap eats, thanks to the large student population | © Mick Sinclair / Alamy Stock Photo

“Another BYO restaurant is The Sichuan in Old Street. It’s so good and a Sunday night favourite; walk down there and bring a bottle of wine – although it also sells beer. It serves Sichuan food, and the flavours are amazing – super fresh and spicy. I lived in Hong Kong for six months and got addicted to crab cooked in Chinese spices, and this is one of the very few places where you can get a whole crab in East London in that style. Just go all in. There are some classics on the menu. But I don’t eat pork, so a lot of the most ubiquitously Sichuan dishes are off bounds for me. The vegetarian dishes, like fungus and aubergine, as well as the crab, are what I come for. And the omelette with chives: simple but so good.”

“I always talk about Brawn! It’s been there for nine years or so, and I’ve never had a bad meal here. It’s buzzing and the food is honest. It knows what it does well, and there’s something very humble about the way it approaches the cooking. Brawn doesn’t jump on trends; it’s its own trend. I think it’s quite amazing to have carved out a niche of ‘this is what we do well, and we do it consistently.’ The team are always super nice, and it’s got an infectious energy. When you walk past it, and people are in there having a meal, you think ‘I wish I were in there.’ To me, it’s very Dickensian; I’m looking through the window, and I feel like a kid seeing a family sitting down to a meal. The wine is brilliant, and it’s cosy in winter and nice and bright in the summer. I honestly could eat there three nights a week. It’s our local and not the cheapest place to eat. It should be a treat, but you know every bite is going to be worth it. I never worry when I go to Brawn; it’s a great place to take people.”

“I have one more (a very small, cheap eat): Sushi Show on Bethnal Green Road. It’s a sweet, family-run sushi spot, and I always run into someone I know there. It sells fresh sushi and great Japanese cooking ingredients, and it always has quite a fun soundtrack, like Green Day. The staff are really friendly, and it’s a good lunch place. If I’m working from home, I cherish the opportunity to go for a walk and get some lunch, and it really feels like a break. Leave room for a rich, chewy, chocolate mochi, and pick up a packet or two of rice seasoning for home.”