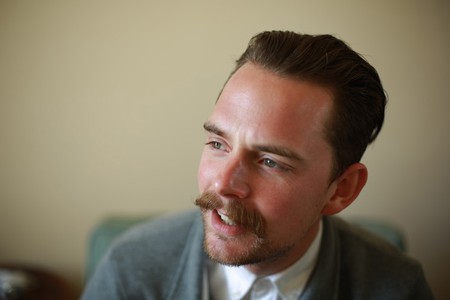 Dan Gray, co-founder of Soho Radio, shares the songs that have soundtracked his time working in the vibrant London neighbourhood.

Soho is at the very heart of the online radio station Dan Gray set up with two friends in 2014.

Broadcast from a building in Great Windmill Street, with a glass wall at the back so passers-by can sneak a peek at the DJs at work, Soho Radio brings together creative people from around the world.

Gray, who works in music management by day representing acts such as DJ Yoda, Norman Jay and The Cuban Brothers, was introduced to the area by Mr Nice (1996) author Howard Marks when the pair used to party together at the infamous Groucho Club.

As for what he loves most about Soho, that’s easy. “It’s all about the people and the mindset. It’s people from all walks of life coming here for well over 100 years. It’s an energy like nowhere else. As soon as I get off the bus at the end of Shaftesbury Avenue and walk up Great Windmill Street, I just feel like I’m home and there’s nowhere else like that in London.”

Dan Gray on his Soho playlist

The Cuban Brothers – ‘I Hate Hate’

That is how me and Adrian [Meehan], my business partner, met. He was the drummer and music director of that band. This song was actually recorded in our music studio downstairs.

This was written and produced by legendary dub producer Dennis Bovell. It was a massive coup for us the day we got Dennis to do a show on Soho Radio. He’s been producing tracks for 40 years in the area and he’s a Soho legend.

Terri Walker is one of our DJs and this is her newest recording. We like to play to Soho’s heritage, so we have one foot in the past, but we’re definitely a forward-facing radio station that celebrates what’s to come in the area and within the music industry.

This was taken from a Wag Club compilation. Wag was a club around the corner in the ’80s that ran in Soho and was infamous worldwide. Chris Sullivan, the founder of Wag, does a show every Wednesday. This was a response to Average White Band’s ‘Pick Up the Pieces’. Hamish Stuart from Average White Band is also a part of the Soho Radio family.

Last year, when President Trump was visiting Soho, we put on a Revolution Day programme with some of the best DJs in the world. We wanted to take a stance against him. Stop Brexit and eject the Tories was also the tagline of the day. We started off with a few people meeting to join the rally but by 5pm we had 3,000 people on Great Windmill Street. I feel like this song really sums up our peaceful protest.

Joel was someone I met via the radio station. He’s a new artist we’re working with and that we’re very excited about in 2019. He is a British soul singer from South East London working with the likes of Kojey Radical and Guy Chambers.

The Manish Boys – ‘I Pity The Fool’

This was an early David Bowie recording, which harks back to Soho’s musical heritage. David was playing here in the mid-’60s in the Marquee Club. There was that whole scene with Bowie, The Who, Pink Floyd all doing their first-ever gigs in Soho.

‘Gravity’ is a special song for us. Two years ago, we built a lathe to cut live sessions direct to vinyl, so we’ve had a whole host of different bands come through to record. Paul Weller was our biggest coup to date.

This is a song produced by James Lavelle, who does a monthly show with us on the radio. It’s inspired by the soundtrack of Roma and a brand new song from 2019 that we’re playing a lot here.

We started up as a community radio station in one of the most creative neighbourhoods in the world. [As] a community, we’ve been lucky to have many births in the team but we’ve also had three deaths – Virgil being one of them. He was with us from pretty much the off. He was the drummer in Little Barrie, who were part of the extended Soho Radio family. Sadly, Virgil passed away [in 2017]. I just want to mark that as he was a beautiful man and this is a beautiful song.