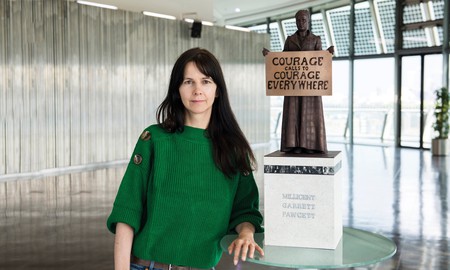 Next week Parliament Square in London will get its first-ever statue of a woman. Turner Prize-winning artist Gillian Wearing OBE has designed the monument of Suffragist leader Millicent Fawcett.

It’s taken 85,000 people’s signatures to action this historical event. The Brazilian-born British feminist campaigner, Caroline Criado-Perez started her change.org petition over two years ago to get a statue of a suffragette in the square.

Mayor Sadiq Khan responded positively to the call for a female figure in the famous square and after a lengthy commissioning process, decided upon Gillian Wearing OBE as the artist to undertake this task.

2018 is the centenary of the 1918 Representation of the People Act that gave some women the right to vote and the unveiling of the Millicent Fawcett statue forms part of the Mayor’s #BehindEveryGreatCity campaign.

Wearing’s statue depicts Fawcett, who founded the National Union of Suffrage Societies, holding a placard that reads, ‘Courage Calls to Courage Everywhere’, which comes from a speech the women’s rights campaigner made after the death of suffragette Emily Wilding Davidson at the Epsom Derby in 1913. 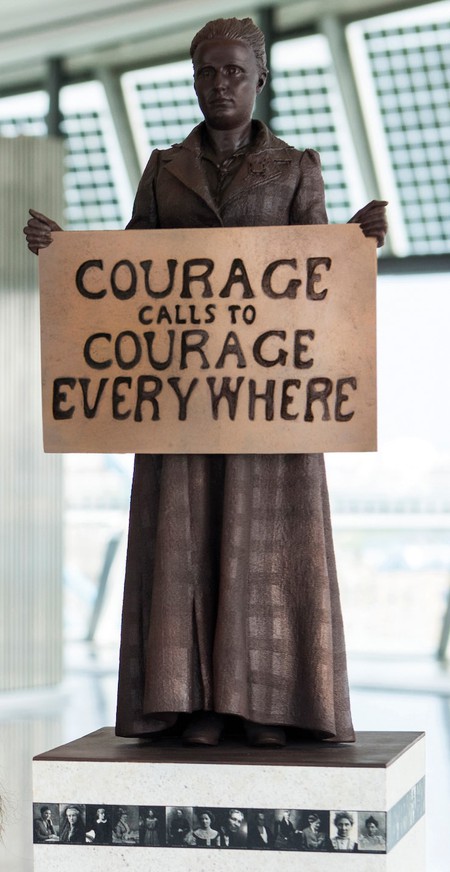 The plinth on which Fawcett stands will also feature the names and portraits of 59 women and men who supported the suffrage movement. From Henrietta Franklin, leader of the Jewish League for Woman Suffrage and education reformer to Laurence Housman, the founding member of the Men’s League for Women’s Suffrage.

‘As part of our #BehindEveryGreatCity campaign I’m really proud to unveil the women and men whose names and portraits will be etched on the plinth of the Millicent Fawcett statue,’ said Khan.

Wearing went on to comment about the inclusion of the additional portraits, ‘These were all incredible people and by honouring them in Parliament Square, I believe they will continue to inspire generations to come.’

The Millicent Fawcett sculpture will be unveiled on 24 April, 2018 in Parliament Square, Westminster, London SW1P 3JX.

Want to see more art in London? These are the art events we’re most excited about.