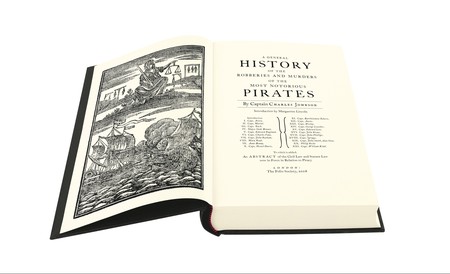 Almost 300 years after it was first published, A General History of the Robberies & Murders of the Most Notorious Pirates by Captain Charles Johnson has been reprinted by the Folio Society in a beautiful hardcover edition with an introduction by maritime historian Margarette Lincoln.

Originally published in 1724, Captain Charles Johnson regales readers with the treacherous tales of seafaring men, but it was his inclusion of women pirates that made the work a commercial success. Nearly three centuries after its original publication, the women pirates still steal the show in this reprint by the Folio Society. In this excerpt, Captain Johnson details the difficulties the pirate Mary Read faced when it came to disguising her sex from her shipmates. 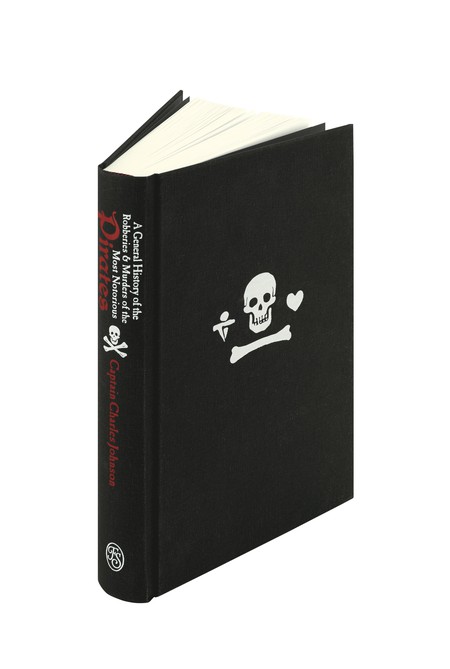 Her [Mary’s] sex was not so much as suspected by any person on board till Anne Bonny, who was not altogether so reserved in point of chastity, took a particular liking to her. In short, Anne Bonny took her for a handsome young fellow and for some reasons best known to herself, first discovered her sex to Mary Read. Mary Read, knowing what she would be at, and being very sensible of her incapacity that way, was forced to come to a right understanding with her; and so to the great disappointment of Anne Bonny, she let her know she was a woman also. But this intimacy so disturbed Captain Rackam, who was the lover and gallant of Anne Bonny he would cut her new lover’s throat; therefore, to quiet him, she let him into the secret also.

Captain Rackam, as he was enjoined, kept the thing a secret from the ship’s company; yet, notwithstanding all her cunning and reserve, love found her out in this disguise and hindered her from forgetting her sex. In their cruise they took a great number of ships belonging to Jamaica, and other parts of the West Indies, bound to and from England; and whenever they met any good artist [craftsman] or other person that might be of any great use to their company, if he was not willing to enter it was their custom to keep him by force. Among these was a young fellow of a most engaging behaviour, or, at least, he was so in the eyes of Mary Read, who became so smitten with his person and address that she could rest neither night or day. But as there is nothing more ingenious than love, it was no hard matter for her, who had before been practised in these wiles, to find a way to let him discover her sex. She first insinuated herself into his liking by talking against the life of a pirate, which he was altogether averse to; so they became messmates and strict companions. When she found he had a friendship for her as a man, she suffered the discovery to be made, by carelessly showing her breasts, which were very white. 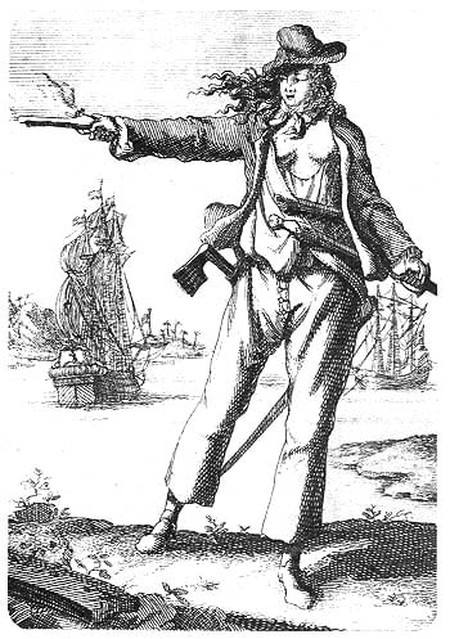 Engraving of Anne Bonny that appeared in an 18th century reprint of the book into Dutch, this and similar engravings can be found in the Folio Society edition. | © Public Domain / Wikimedia Commons

The young fellow, who was made of flesh and blood, had his curiosity and desire so raised by this sight that he never ceased importuning her until she confessed what she was. Now begins the scene of love. As he had a liking and esteem for her under her supposed character, it was now turned into fondness and desire. Her passion was no less violent than his, and perhaps she expressed it by one of the most generous actions that ever love inspired. It happened this young fellow had a quarrel with one of the pirates, and their ship then lying at anchor near one of the islands, they had appointed to go ashore and fight, according to the custom of the pirates. Mary Read was to the last degree uneasy and anxious for the fate of her lover; she would not have had him refuse the challenge, because she could not bear the thoughts of his being branded with cowardice; on the other side, she dreaded the event, and apprehended the fellow might be too hard for him. When love once enters into the breast of one who has any sparks of generosity, it stirs the heart up to the most noble actions. In this dilemma she showed that she feared more for his life than she did for her own; for she took a resolution of quarrelling with this fellow herself, and having challenged him ashore, he appointed the time two hours sooner than that when he was to meet her lover, where she fought him at sword and pistol and killed him upon the spot.

It is true, she had fought before, when she had been insulted by some of those fellows, but now it was altogether in her lovers’ cause; she stood, as it were betwixt him and death, as if she could not live without him. If he had regard for her before, this action would have bound him to her forever; but there was no occasions for ties or obligations, his inclination towards her was sufficient. In fine, they applied their troth to each other, which Mary Read said she looked upon to be as good as marriage in conscience as if it had been done by a minister in church…

A General History of the Robberies & Murders of the Most Notorious Pirates by Captain Charles Johnson is available exclusively from www.foliosociety.com