Botticelli, Paradiso V – The face of Beatrice was originally drawn looking up and is still slightly visible | © A.Winners
There are few opportunities to see rarely exhibited, truly unique pieces of work from an iconic Renaissance artist — and this is precisely the basis for The Courtauld Gallery’s Botticelli and Treasures from the Hamilton Collection, on view from the February 18th until May 15th 2016. For the first time in 16 years, Botticelli’s drawings of the Divine Comedy are on display as a result of a collaboration with the Kupferstichkabinett in Berlin.

Sandro Botticelli is most known for his mythology paintings, found in the Florence Uffizi Gallery, like Primavera and Birth of Venus. However, during his time working for the Medici, he was commissioned to make a different type of art. He was to make a series of drawings illustrating scenes from the popular epic, the Divine Comedy by Dante. The purpose of the drawings, thought to have been made around 1480-95,  remains a mystery. They were first mentioned by an unknown author in 1540 who said that Botticelli ‘painted and illustrated a Dante on sheepskin for Lorenzo di Pierfrancesco de’ Medici [who also owned the Primavera] which was held to be something marvellous.’ 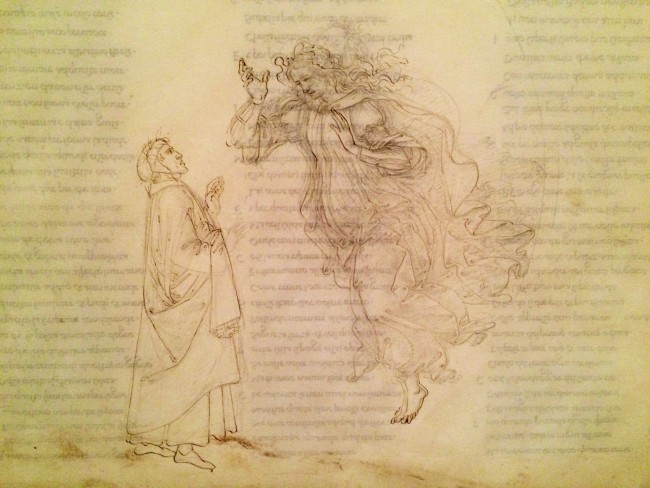 Botticelli, Paradiso V – The face of Beatrice was originally drawn looking up and is still slightly visible | Courtesy of A.Winners

These extraordinary drawings are unique within Botticelli’s oeuvre and in their bound form. The drawings show the only time Botticelli illustrated literature, and are the result of an incredible amount of work. The artist spent an immense amount of effort illustrating the complex imagery of the cantos (major sections of long poems) of the Divine Comedy, in what came to be 102 drawings. Some of the drawings exhibited show traces of Botticelli’s changes in design.

To make these drawings even more special, they were compiled in a unique format that could be the great grandparent of today’s graphic novel. Normal to the 15th century reader was illuminated manuscripts, in which text occupied most of a page and drawings were mainly placed around the margins. These drawings, however, took up a whole page without words, and the accompanying text was placed on the next page. Each page has a drawing on one side and text on the other. The drawings were bound and meant to be to be turned sideways and read vertically — this is why there is text visible through the vellum of the drawings. It is thought the drawings were to be coloured but that plan was abandoned at an early stage. 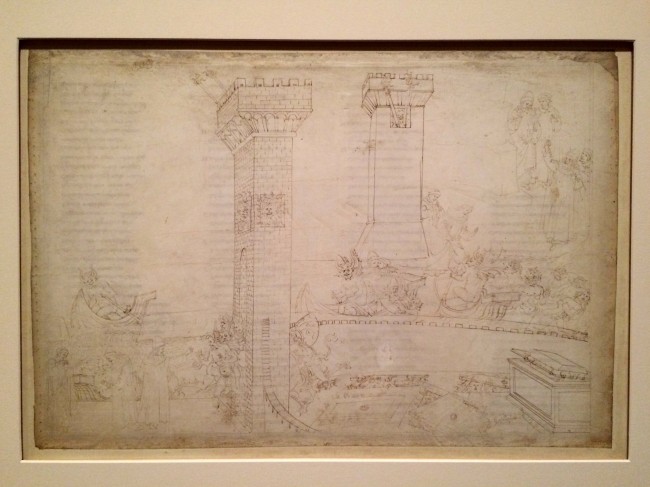 Botticelli, Inferno VIII – Text from the reverse of the page is visible under the drawings | Courtesy of A.Winners

The book of drawings came to be in the possession of the Duke of Hamilton, but in 1882 the Berlin Kuperferstichkabinett (Prints and Drawings Museum) bought the book and 700 other items, mainly illuminated manuscripts, from the Duke of Hamilton in order to make up for huge debts (looking at you 12th Duke of Hamilton!) This was a horrible loss to England, even Queen Victoria’s daughter tried to prevent the sale. Today, the drawings are not a complete set. The Berlin museum owns 85 drawings, 30 of which are on display at the Courtauld, seven are at the Vatican Library, and 10 drawings are missing (but keep your eyes open at flea markets!) 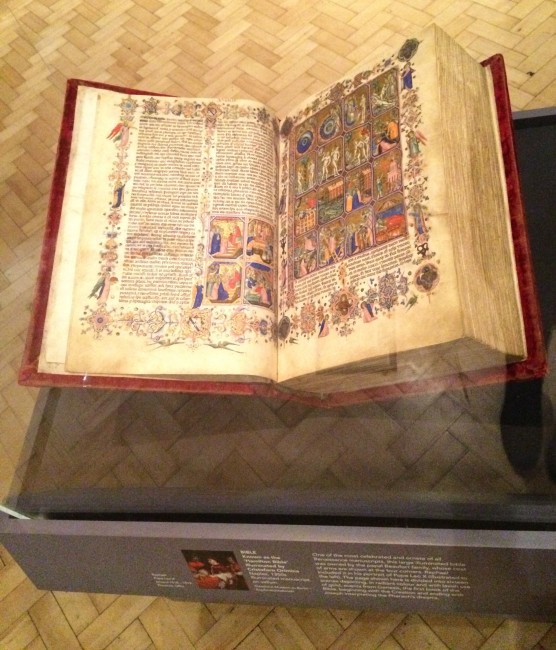 The Hamilton Bible | Courtesy of A.Winners

Throughout the exhibit are illuminated manuscripts from the collection of the Duke of Hamilton, the most important of which is the Hamilton Bible. One of the most celebrated books of the Renaissance, the bible has 36 ¾ page illustrations and is opened to a page showing a scene from the Book of Genesis, which makes an appearance in Raphael’s Pope Leo X. 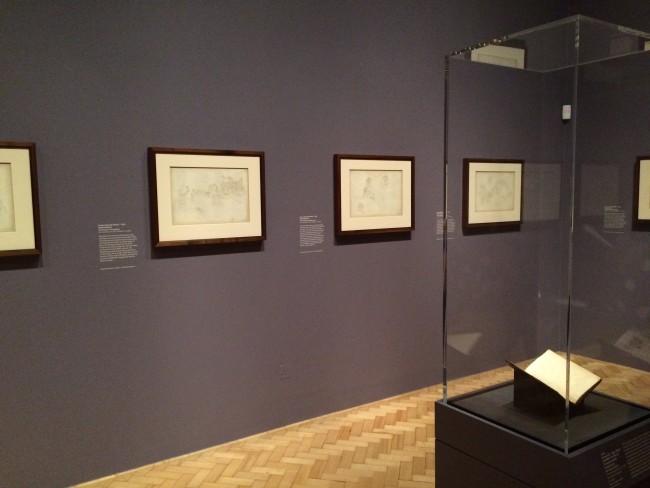 A view of Botticelli and Treasures from the Hamilton Collection at the Courtauld Gallery | Courtesy of A.Winners

A Walk Through The Divine Comedy

The exhibition is organised into the three sections of the Divine Comedy: Hell, Purgatory, and Paradise. It is through this display that Botticelli’s imagination becomes evident. Tortured souls contort, demons dance, and the Universe swirls throughout the pages. Indeed the emotion of the poem is conveyed as much through the design as the detail.

The first two sections of the story are crowded with small, tightly-packed figures, the third and final section, Paradise, contains only one or two larger figures. Introducing the exhibition are some of the busiest illustrations, and the mind races trying to digest the chaotic scenes. Moving along the walls with Dante’s progress from Hell to Purgatory, the main characters become recognisable but the scenes are still visually complex. At the end, the mood is buoyed by the simplicity and beauty of the Paradise drawings. Though a loss to the original form, it is perhaps in our favour that the pages of the book were separated. In walking around rooms, the viewers can follow along with the story in a greater capacity than possible if it were still bound. 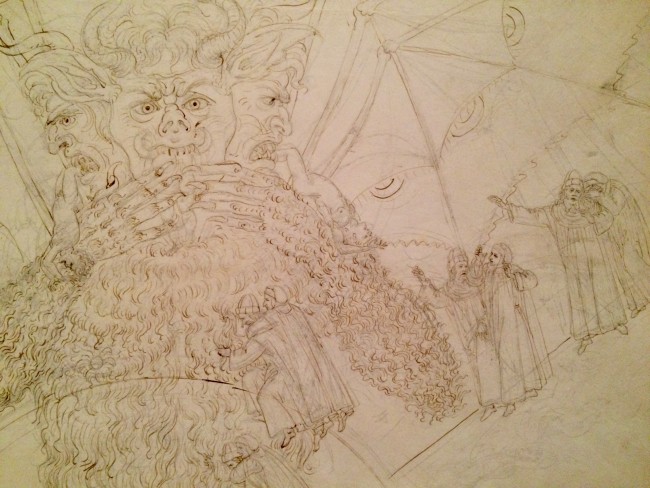 The Genius of Botticelli

Florentine Renaissance artists are known for their disegno (design) and Botticelli demonstrates this idea thoroughly throughout his intricately planned drawings. He uses many techniques of contemporary drawing such as continuous narrative, showing the main character, Dante, and another character, Virgil, in the same clothing and appearing in multiple places on a single page as the story progresses. 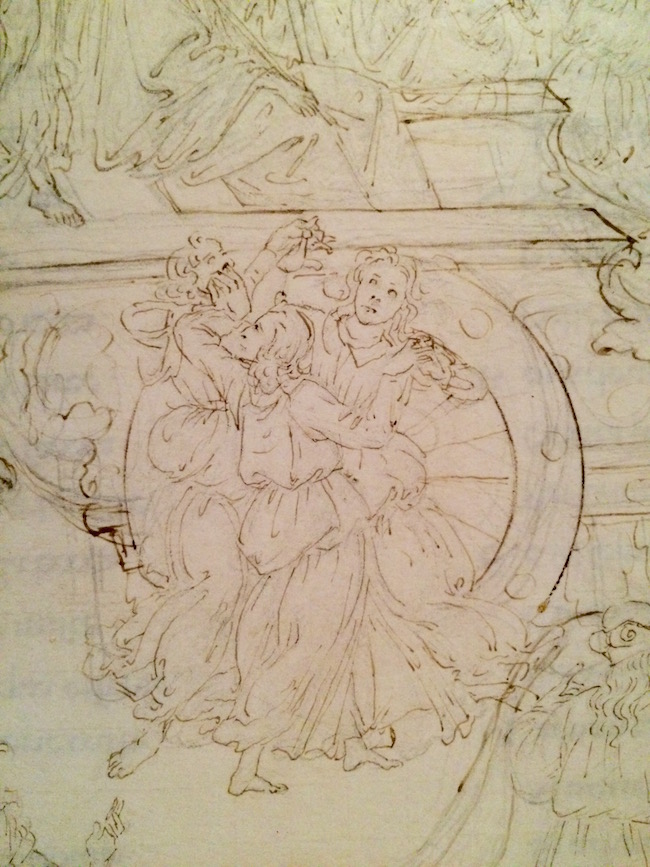 Botticelli, Purgatorio XXXII (detail) The muses are similar to those in Primavera by Botticelli | Courtesy of A.Winners

Like nervously waiting for a new genre of music from a beloved singer, a question that must be asked is, if he didn’t make illustrations often, can one tell Botticelli was the artist? The answer is a resounding yes. Those familiar with Botticelli’s paintings of flowing drapery, dancing muses, curling ringlets and lush gardens will recognize these same details in his drawings. Viewers will leave the exhibit just as relieved they made it through the nine rings of Hell as inspired by the creative output of a legend of the Renaissance.