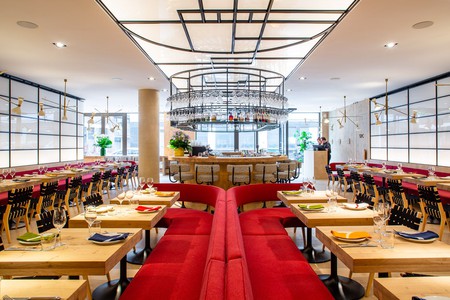 The interior at ROVI | © ROVI

Alex Meitlis has been collaborating with food superstar Yotam Ottolenghi since 2002. Meitlis explains the role of design in the restaurant experience and why he is happiest when nobody notices his work.

“Going to restaurants is all about the experience, a lot of which is subconscious,” says Alex Meitlis, the designer behind Yotam Ottolenghi’s newest addition to the chef’s burgeoning food empire, ROVI. “Even if the customer doesn’t actively notice my work, they’ll still feel the experience and that’s what matters.”

The 60-year-old has been working with Ottolenghi since the latter started his mission to bring innovative Middle Eastern food to the UK. While Ottolenghi wants to cook food that creates “drama in the mouth”, Meitlis simply wants to blend into the background, in the most beautifully understated way possible. “I design sets for people to enjoy food on. The idea that food is an art form and we’re just giving it a gallery caused quite a stir. People think my style is very easy to copy because it looks so simple, but it’s not. Just as Ottolenghi’s food seems so simple but takes lots of ingredients to make, my designs are all about quality and detail and proportion.” 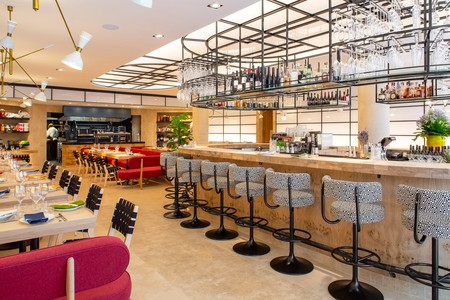 Living between London and Tel Aviv, Meitlis is an award-winning international designer who initially trained as an architect. He established his own studio merging interiors, architecture and industrial design in 1993, and works through these mediums to create a complete space, a “total design” approach. He’s also half of newly formed creative duo Alex Meitlis and Ivo Bisignano that he established with his life and business partner Ivo Bisignano.

Meitlis has worked with Yotam Ottolenghi, an Israeli-British chef and food writer who since 2002 has revolutionised London’s food scene. From the beginning. Ottolenghi opened his self-titled first deli in Notting Hill serving vegetable-focused mains, salads and patisserie characterised by unusual combinations of flavours and Middle Eastern ingredients such as pomegranate molasses and rosewater. He now owns five delis and restaurants across London, and his food columns are so popular that supermarkets now stock the spices used frequently in his recipes, such as sumac and za’atar.

“I’ve designed all of Ottolenghi’s restaurants from day one. He’s my best friend, and the friendship and love comes through in the process,” Meitlis says. “Everyone who works at the restaurants are in the Ottolenghi family, so I’m designing a home for that family.” The approach has been hugely successful and widely copied. “We were the first people to do a white space for food, which now sounds banal and ordinary. We have been copied 20,000 times all over the world.” 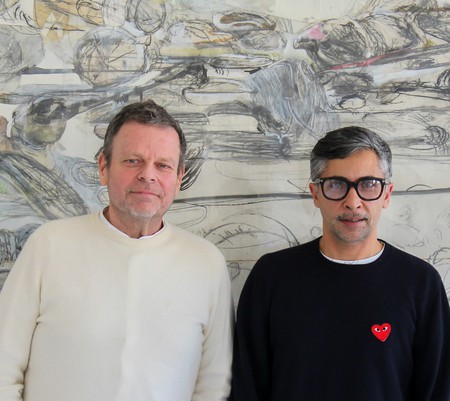 Like the food at ROVI, which has well-sourced seasonal ingredients and trusted suppliers at the heart of its dishes, Meitlis has used natural materials throughout the space. Drawing inspiration from Bauhaus and Modernism, it has an industrial aesthetic designed to let the colours and flavours of the food shine.

“A lot of the food at ROVI is cooked on the charcoal wood grill, so essentially the room is an enormous celebration of this process,” Meitlis shared. “The whole energy of the room is focused on the grill and it can be seen from almost every seat. It’s like a theatre, and the only decorations and players are the food. ROVI’s all about ethical sourcing and provenance of animals and vegetables, so I took the same approach with the materials. I used travertine stone and oak wood, which don’t usually go together, just like Ottolenghi uses bold, unusual flavours together in food.”

Meitlis wanted the restaurant to appear timeless. “In a year’s time, I’m hoping that you won’t be able to tell when it opened. I want the colours, the materials, the essence of what I doing to transcend trends. 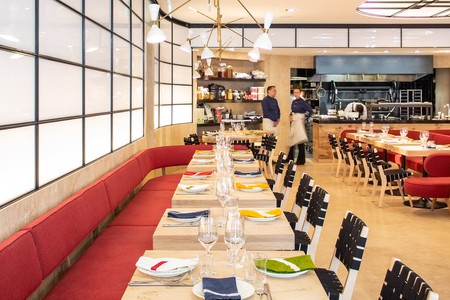 ROVI has coloured napkins, which bring interest to the space | © ROVI

“I designed everything in the restaurants, with the only bought furniture the Knoll chair, the pre-war chair designed in America. Just like in the kitchen, they make everything themselves – the bread, the pasta, the sauce. We do the same with the furniture and the design.”

Despite being a plain stage for the colourful, flavourful food, Meitlis’ design isn’t uptight. “Both the design and the food both bring a sense of celebration to the restaurant. Does it make you smile, is the question I like to ask. Does it relax you and lift your spirit?

“The napkins at ROVI are like Yotam’s spices. If you don’t add that eighth of a teaspoon of salt to the food you’re cooking, the recipe doesn’t work. The napkins bring that exact 6% of spice and colour to the space. I love salt, but if you put too much it’s shit – the proportions of monochrome and colour must be proportioned exactly right.”

It’s this attention to detail which makes Meitlis’ designs delicious.