North Vs. South: Where To Find The Best Food In London 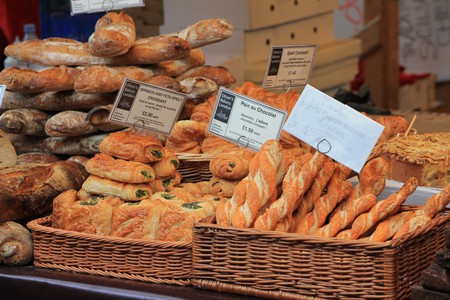 People’s thinking about the north and south divide tends to be structured along very binary lines. North equals the land of the wealthy, cultured, liberal elite, and the south a gritty, multicultural, arty realm — and people’s conceptions about London dining play into this. However, much of these stereotypes are outdated, and with the east/west divide to factor in too, perhaps the division just doesn’t hold up. So, north versus south — just what is the food story?

London is now widely recognised as one of the restaurant capitals of the world, but it’s rare to find ‘Best Restaurant’ guides encouraging their readers to head south of the river. Instead, West End districts such as Mayfair, Marylebone, Kensington and Covent Garden continue to dominate in terms of fine dining, with some of the world’s best hotels, the city’s oldest eateries (Simpson’s-in-the-Strand, the Criterion, Wilton’s) and a high concentration of Michelin-starred restaurants. Likewise, the West End houses some of the world’s most renowned food stores, with luxury confectioners and high-end department stores such as Harrods, Fortnum & Mason and Harvey Nichols home to mouthwatering food halls. For cooler, more contemporary dining, areas such as Soho, Shoreditch and Farringdon, with its multi-level industrial buildings, have enjoyed increasing renown for their restaurants.

Recently, there has been growing recognition of South London’s restaurants. Bermondsey Street, just around the corner from London Bridge, is particularly celebrated, home to tapas bar José, gastropub The Garrison, and French bistro Casse-Croûte. On the other side of town, Clapham has enjoyed a surge in popularity in recent decades, and is now a thriving area filled with some great restaurants at cheaper prices than north of the river. And let’s not forget one of the main bonus points of heading south for a meal — no tourists.

Virtually every corner of London has got something unique to offer in terms of international cuisine. South London is home to a high concentration of black Londoners, so Afro-Caribbean and African cuisines are well covered. Brixton and Peckham are bursting with restaurants from every corner of the globe, making them perfect destinations for foodies of all descriptions. For African and Caribbean food, though, head to MTK for some Nigerian dishes, Zoe’s Ghana Kitchen for contemporary West African, or Fish, Wings & Tings for Caribbean fare in Brixton, or check out Obalende Suya Express, JB’s Soul Food or any number of joints down Rye Lane in Peckham. Of course, North London can hold its own corner in this regard with Notting Hill and Shepherd’s Bush, both incredibly diverse areas.

North of the river, everybody knows that Chinatown is the go-to place for Chinese food, but there are many other enclaves in North London where various communities have tended to congregate — often the best places to head to for authentic eating. For Bangladeshi food nowhere compares to Bethnal Green, in particular Brick Lane (aka Curry Mile), while the Borough of Haringey is always a great option for a Turkish meal. Elsewhere, Edgware Road by Paddington brings the Middle East to life, Spaniards make a beeline for Portobello Road, while Clerkenwell, historically the home of Little Italy, still boasts some cracking Italian delicatessens and restaurants.

South London wins when it comes to French food, but only if we’re prepared to admit South Kensington as southern in light of its SW postcode. If you’re prepared to travel further afield, then New Malden in South West London is basically the city’s Korean headquarters — almost a third of the area’s population hail from the South East Asian states, filling it with great restaurants.

If there’s one thing London isn’t short on, it’s food markets. By far and away the most famous is Borough Market on the Southbank. One of London’s oldest markets, it’s filled with fresh produce stalls (offering free samples) as well as delicious street food, and is surrounded by bars, pubs and sit-in restaurants too. Two more recent additions to the east of London Bridge are Maltby Street Market and Druid Street Market, which offer an equally great selection of foods minus the thronging crowds. The SCFoodMarket at Southbank Centre also hosts a popular weekly food market, while nearby Elephant & Castle has just seen the arrival of Italian artisan market Mercato Metropolitano, making Southwark the runaway winner in the London market scene. There are plenty more great options in South London, including the legendary Brixton Market, the village-y Brockley Market and the relaxed Greenwich Market, while plenty of other communities are in the process of setting up their own affairs, from Stockwell to Streatham.

Of course, North London is not exactly lacking in markets either. Every summer, Dalston becomes a beacon for foodies across the city as nighttime street food proprietors Street Feast arrive. In the West End, multicultural Shepherd’s Bush Market has been drawing crowds for years, as has the brilliant Brick Lane Market, which bursts into life every Sunday, and the bustling Camden Market. While markets such as Hackney’s legendary Broadway Market demonstrate the power of street food to rescue borderline extinct food markets, a host of North London newbies — including Leather Lane Market, which feeds Holborn’s hungry lunchtime worker crowd, Acklam Village Market, which brings art and food together in a trendy space near Portobello Road, and Epicurean’s World Food Market in the beautiful St Katharine’s Docks — prove that the street food trend isn’t going anywhere soon.