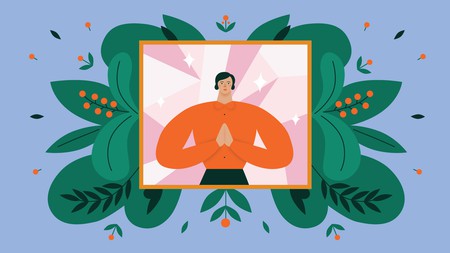 Michelle Roques-O’Neil is a pioneer in the wellness world, specialising in energy healing through the power of aromatherapy. A session with her combines acupuncture, reiki, crystals and intuitive touch to restore emotional wellbeing to even the most stressed-out of souls.

Leading the self-care wave in London is resident alchemist Michelle Roques-O’Neil, one of the capital’s best-kept wellbeing secrets. Her healing hands, and reputation, have had clients queueing at her Westbourne Grove door for over 30 years. Her breadth of skills means she defies categorisation; she’s been described at once as a healer, reiki master, aromatherapist, spiritual life coach and alchemist, but Roques-O’Neil’s therapies have never been more pertinent to a generation running on cortisol, caffeine and constant screen time.

With an immediately calming presence and warm, maternal energy, it’s not hard to see why Roques-O’Neil has become the go-to for thousands of Londoners, not just hardcore spiritual types. Culture Trip met her on a particularly dark and wet winter afternoon at the end of a busy week but felt instantly at ease in her presence. Some clients have been seeing her regularly for years, relying on her mystical powers to ease anxiety, overcome grief or boost self-esteem, while others have been referred by friends, curious as to how their bodies, and energy systems, can be transformed under her spell.

“Once a treatment is under way,” Roques-O’Neil says, “I go into a trance-like state where I’m having a conversation with your higher self. I can tell instantly what’s blocking you.” To sceptics, this may sound far-fetched, but there is no doubting her sincerity. Over the next 45 minutes, Roques-O’Neil silently holds different parts of the body, working on energetic blocks and belief systems – facets of yourself she believes can become sluggish over time due to stress, toxins and the electromagnetic energy we absorb from modern-day gizmos, such as phones, laptops and other devices. “It’s like removing a layer of static that’s stopping you listening to yourself,” she explains. While everyone’s experience with her is different, she insists the end goal’s the same: to clear the body’s energetic field so you can emotionally move past what’s holding you back in life.

It’s this unique, multifaceted approach that’s at the heart of Roques-O’Neil’s legendary treatments. A session with her can be life-changing – there’s a reason she’s on the speed dial of Sting and Yasmin Le Bon. Unlike a traditional massage, which aims to banish knots, a session with Roques-O’Neil works to rebalance and restore frazzled minds with surprisingly little hands-on contact, instead focusing on the spine (an “emotional switchboard” according to Roques-O’Neil).

Each treatment is bookended with a consultation and tarot reading, both allowing Roques-O’Neil to tailor the session to an individual’s needs. “When a client comes into my room, I instantly feel their energy, but it’s through that initial chat that I really discover what’s going on. I’m listening to their preoccupations – it could be panic or chaos. I’m listening to their language.” At the end of the treatment, we were encouraged to pick two cards from her tarot deck, a kind of spiritual takeaway. The overwhelming need to better listen to our body and feelings was one, while the other focused on the importance of family relationships, a common thread in Roques-O’Neil’s work, she tells us.

While Roques-O’Neil didn’t always aspire to be an energy healer, an unconventional childhood arguably set her on the path to all things mindful. Born in Mumbai to an Anglo-Indian mother and a Scottish father, she believes a childhood spent flitting between various countries was the catalyst behind her passion for all things alchemical. “I’ve always been a bit of a nomad,” she says. “I never stayed at one school for more than a year, which made me quite a solitary person. I was constantly having to fit in and often felt unsettled.” This all changed on a visit to a local temple near her family home when she was eight. Roques-O’Neil remembers being mesmerised by the scent of sandalwood and rose petals emanating from incense burning nearby. “Looking back,” she says, “I guess this was a defining moment for me. Something just shifted.”

Roques-O’Neil was right to have felt something in the power of sandalwood – it’s been regarded as one of the most powerful botanicals for centuries, believed to have a high vibration, prized for its calming, sedative effects and thought to increase spiritual awareness. She believes her relationship with spirituality and scent was deepened after she attended a Catholic convent school, where she says she would spend hours sitting in church pews, “just feeling the energy”.

Fast-forward five decades and Roques-O’Neil’s talents have seen her pioneer innovative treatments for spas across the globe and design bespoke aromatherapy blends for beauty behemoths such as Space NK, Sarah Chapman and de Mamiel. Having trained under aromatherapy pioneer Micheline Arcier – one of the first people to bring the practice to the UK in the 1960s – Roques-O’Neil also holds qualifications in a range of esoteric therapies, such as reiki, Chinese alchemy, spiritual psychotherapy and crystal therapy.

Roques-O’Neil is also a businesswoman. Her crystal-infused beauty brand, Therapie, champions the power of aromatherapy. Bridging the gap between physical wellness and spiritual integrity, Therapie’s products include the cult Himalayan Detox Salts, designed to alleviate stress thanks to a blend of minerals, powdered amethyst and essential oils charged with reiki to balance pH levels and dissolve emotional toxins. The Restore Aura Spray, meanwhile, packed with frankincense, tropical basil, white sage oil and rosemary, is Roques-O’Neil’s personal favourite in the Therapie line-up, if only for the years it took to create the formula.

Some may be sceptical about this increasingly spiritual pathway to wellness, but it’s precisely this approach that Roques-O’Neil believes will change how millennials approach self-care. “Urbanites all seem to want these really intense, deep-tissue massages. So many people think that’s what will help them when what they really need is something far more restorative.”

And for energy-healing sceptics? Roques-O’Neil is quick to add that everything on earth has a frequency, and by giving yours some TLC, you’re merely enhancing your wellbeing and becoming a better version of you. “Some people may think it’s all a load of nonsense, but I encourage them to come and try a session and then reassess their opinion.”

Millennials, however, are starting to wise up to the power of energy healing as a complementary therapy. New Age philosophies, such as crystal healing and energy cleansing, are fast emerging as antidotes to the stresses of modern life as we seek calm and sanity in a chaotic world. Post-work drinks and Netflix binges are being replaced by quasi-spiritual practices as millennials seek longer-lasting, more holistic stress solutions. Crystals, for example, once dismissed as hippie nonsense, have gone mainstream, with Google searches up 40 percent in the past four years. It’s believed the energy they emit can harmonise the atmosphere as well as the mind and body, explaining why even high-flying CEOs have been known to hoard them in suit pockets and on their desks.

Elsewhere, searches for ‘self-care’ have soared by 140 percent on Pinterest, while searches for sober living have risen by 746 percent. Sound baths – a relaxation-and-meditation session in which attendees passively absorb the vibrations of gongs and crystal bowls – are now as popular as yoga classes, and reiki therapy is available on Harley Street.