Love Letter to a London Trend: Trousers With a Side Stripe 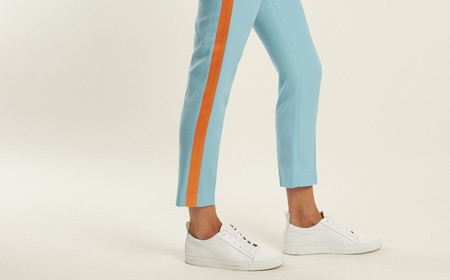 To paraphrase the start of Miranda Priestley’s epic speech in Devil Wears Prada: I think it was Stella who did it first, or maybe it was Adidas, who pioneered the maximalist stripe that runs down the side of wide leg trousers back in AW16 collections. Then it was the middle-weight designers who harnessed the look and then it slowly filtered down to the high street where the red and white line was adopted by every London dweller.

What is it about the side stripe that so fascinates and mesmerises London consumers? Perhaps it is the hint of a more rebellious streak, cutting through the drudgery of otherwise plain pieces or is the nod to sporting favourites. Regardless the result is the same: mass adoption. 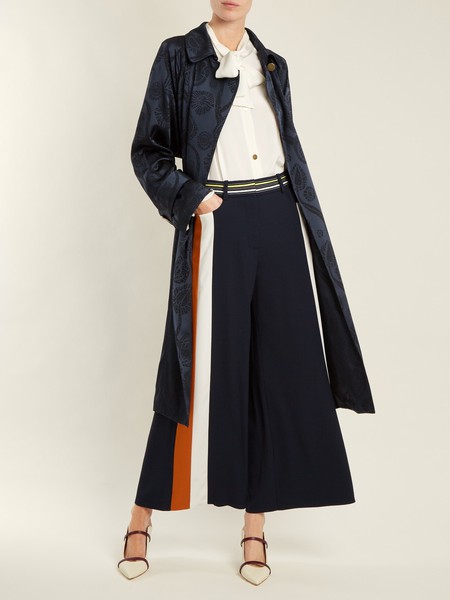 A stripe can act as the aesthetic equivalent of a lucozade, which was something the Italian Futurists worked out at the turn of the century. Not be left behind, fashion too has adopted the invigorating look. The energising power of a stripe on trousers appeals to the febrile masses in this fair city – and besides, with millennials too often spending their salary on coffee, offering an alternative to caffeine in-built into clothes couldn’t fail to seduce.

When one striped wearer passes another it is rumoured that a jolt of electricity creates otherwise inexplicable sparks; millennial witnesses have often discussed this over flat whites. The one stripe trouser sets a potentially dangerous precedent, for if all these Type A fashionistas amass in one Starbucks they might short circuit the espresso machines with their dynamism. 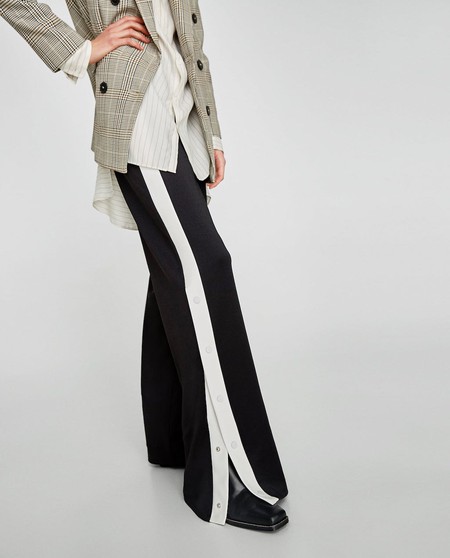 Usually the striped trousers are paired with the Londoner’s favourite style of shoe, the white trainer. This means that even the most high fashion renderings of this look swing to the side of sportswear, conveniently ensuring that athleisure lovers need not stray too far from their comfort zone. When the look was first introduced it was styled, at Gucci, with sporty silk bombers in menswear, while at Marques’Almeida monochrome stripes were layered with matching jackets and dresses for an all in one effect; at Maison Margiela AW16, stripes were offered with buttons up the side (which shows how long it takes for a trend to permeate from catwalk to chain brand). From the very beginning, the versatility of the stripe as a sartorial choice is denoted. This in turn meant that despite its strictly linear existence, the stripe took on a versatile and flexible association. How to win friends and influence people? Wear stripes.

In spite of the nuances it houses, the converse beauty of the stripe is its uniformity. Unlike other London fashion trends which may be considered a little post-ironic for the layman, the stripe is both safe and recognisable. Many will already have encountered it through the nautical trend too, and fashion is always more comfortable when you can simply relocate a design from one place to another – in this case from top to bottom.

And so perhaps the mystery of this London trend is understandable, after all, residents of the capital simply want to be recognised as the dynamic and directional individuals that they are. In an age where inboxes are swamped and attention spans short, the striped trouser is the visual CV that Elle Woods first pioneered when she sent hers to Harvard on pink paper in Legally Blonde: ‘Choose me’, the trousers say, ‘for the Devil wears Prada, but a hardworking and ambitious millennial wears these.’