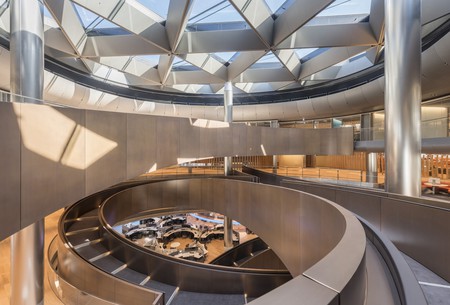 Bloomberg’s brand-new European headquarters in the heart of the City of London sets a new standard for environmentally friendly office design. Possibly the world’s most sustainable office development, it’s been painstakingly designed by Foster + Partners to ensure it respects the capital’s rich cultural heritage and blends seamlessly into its historical surroundings.

While the rest of London is constructing glass skyscrapers left, right and centre (just take a look at this one in Croydon), Bloomberg took a different tack. Inspired by the historic architecture surrounding the site, Foster + Partners chose to use Derbyshire sandstone, making it the biggest stone project in the City of London for a century.

It also bucks the trend in terms of height – while the company could have constructed a 22-storey tower to sit alongside the likes of the ‘Gherkin’ or ‘Walkie Talkie’, it chose to set it at a modest eight storeys so as not to overshadow its older neighbours, the City of London Magistrates Court and Mansion House. 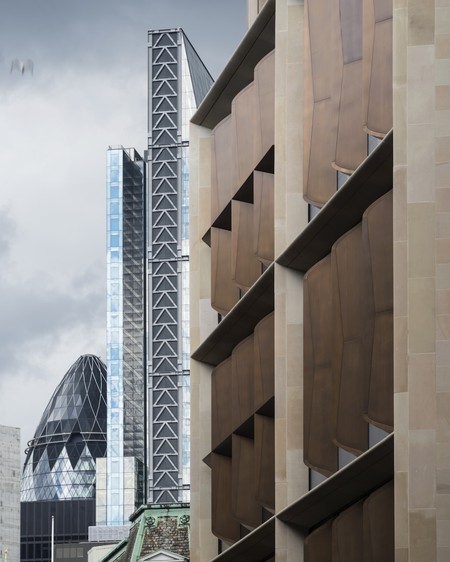 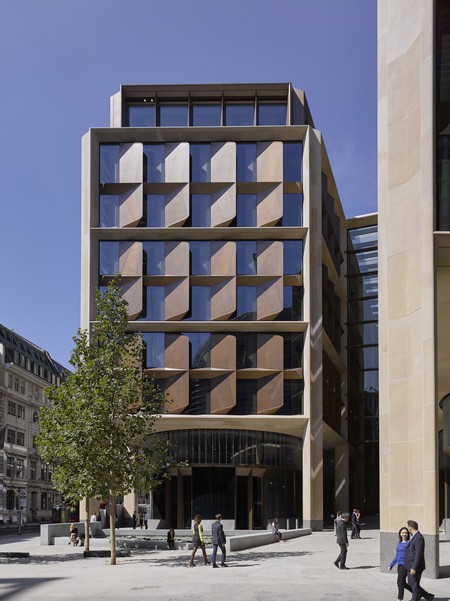 At just over a million square feet, however, it is certainly spacious, housing 4,000 Bloomberg staff. The building was rated as ‘outstanding’ against the BREEAM sustainability assessment method, and uses 70% less water (it’ll save 25 million litres a year) and around 40% less energy than the average office block, thanks to innovative lighting, water, power and ventilation systems, many of which are first-of-a-kind. 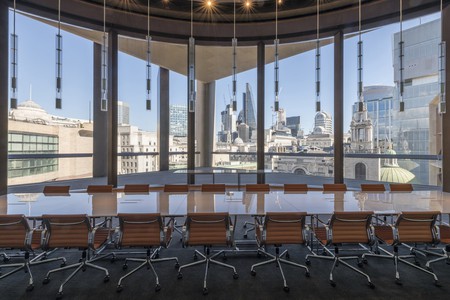 Bloomberg’s founder, Michael R Bloomberg, said: ‘We believe that environmentally friendly practices are as good for business as they are for the planet. From day one, we set out to push the boundaries of sustainable office design – and to create a place that excites and inspires our employees. The two missions went hand-in-hand, and I hope we’ve set a new standard for what an office environment can be.’ 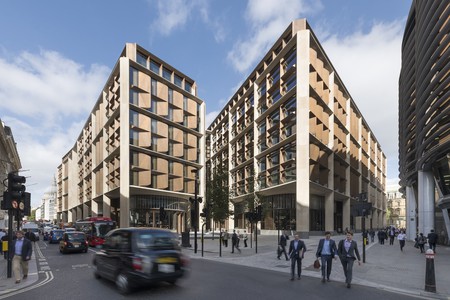 A connection with the outdoors was key to Foster’s design – he wanted the building to be a living, breathing space, with natural ventilation at the heart of the design. It’s only when you look closely at the ceiling that you’ll notice the unique ‘petal’ ventilation design, incorporating 500,000 tiny LED lights, which Foster likens to a ‘radiator’ that also have incredible acoustic properties.

Then there are what he refers to as the ‘gills’ of the building, the distinctive bronze fins that can open and close to provide natural ventilation rather than relying solely on mechanical ventilation. 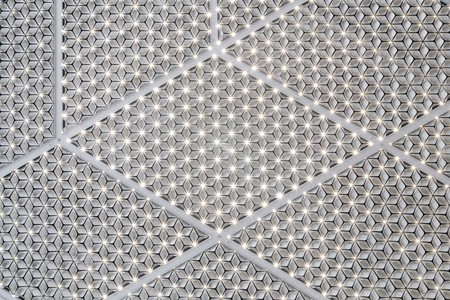 The 'Petal' design of LED lights | Courtesy of Bloomberg 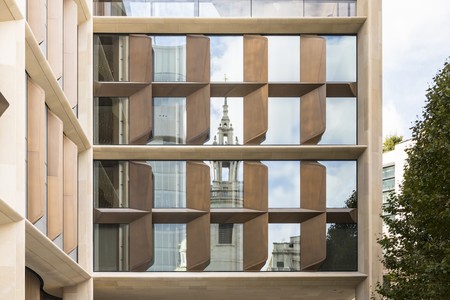 Staff wellbeing was also vital to the design of the new headquarters, with Bloomberg deciding not to include a canteen, but encouraging its staff to go outside at lunchtime instead, in order to break the ‘desk lunch’ culture that exists in so many offices. A chance for staff to connect and collaborate was also key to the structure and as Michael Bloomberg stated at the press conference: ‘the fewer walls there are, the more people will come together.’

A spiralling ramp at the heart of the building is a prime example of this, as it not only acts as a walkway that opens up the internal floors, but it’s also been designed to encourage chance interactions and to bring people together. 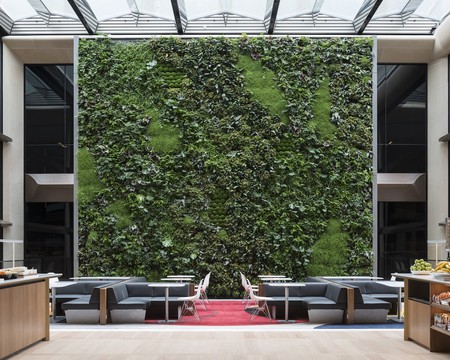 Rather than a canteen, Bloomberg offers staff free food in the 'Pantry' | Courtesy of Bloomberg

Foster said: ‘From day one, we talked with Mike Bloomberg about creating an elegant stone building that responds to its historic setting yet is clearly of its own time. We wanted the building to have integrity and continuity of expression both inside and out, creating an inspiring, innovative, dynamic and collaborative workplace for Bloomberg that embodies the core values of the company.

‘Above all, we had a shared belief with Bloomberg that we should provide the highest standards of sustainability and wellbeing for its occupants, as well as create major new public spaces at ground level, making a significant contribution to the daily life of the City of London and its inhabitants.’ 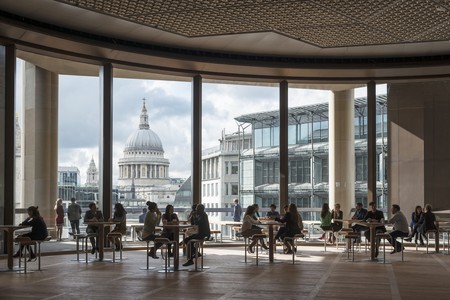 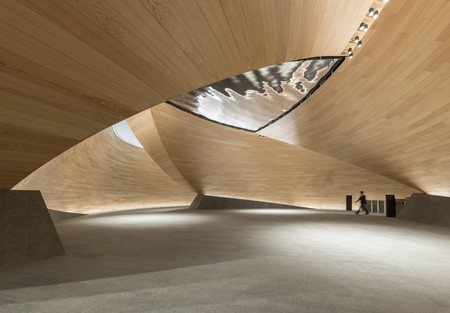 This notion of public involvement and interaction was also vital to the project, with the 3.2-acre site incorporating three public plazas, one of which is a dining arcade, in order to provide a valuable civic space in the heart of the city. A new cultural hub will also open to the public for free in November, to showcase the carefully reconstructed Temple of Mithras and other Roman artefacts found during recent excavations. 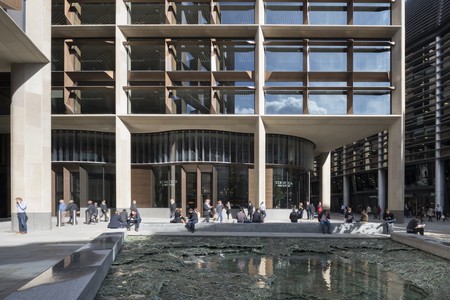 The Mayor of London, Sadiq Khan, also attended the opening event. ‘This fantastic new building is a huge vote of confidence in London as a destination for global business,’ he said. It is also a shining example of what can be achieved by combining fantastic British architecture and the latest green technology to reduce our impact on the environment.’ 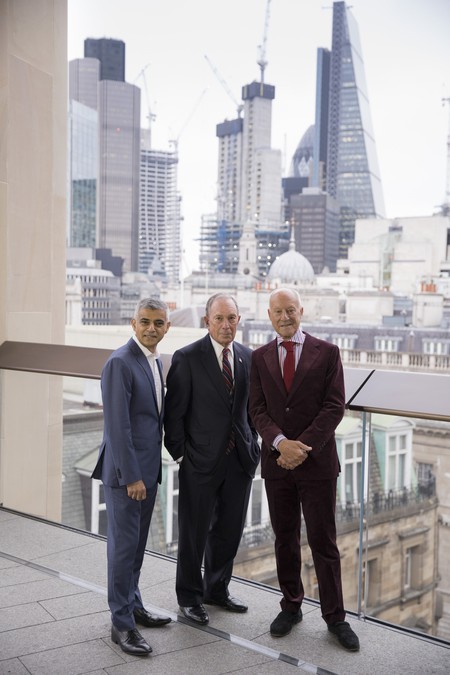 For more London developments, check out Thomas Heatherwick’s new plans for the iconic Olympia events venue and another eco office development in Old Street, the White Collar Factory, which has London’s highest running track on its rooftop.