The 10 Best Doughnut Spots In London

The impressive versatility of the doughnut, from smothering it in icing and sprinkles to filling it with custard, fruit, or chocolate sauce, makes it one of the most popular sweet snacks around. With countless establishments offering this sugary treat, it’s almost impossible to pick the tastiest, which is why we’ve done all the hard work for you and rounded up the 10 best doughnut picks in the city. 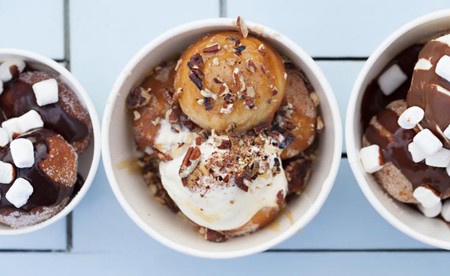 Small But Mighty | Courtesy of You Doughnut 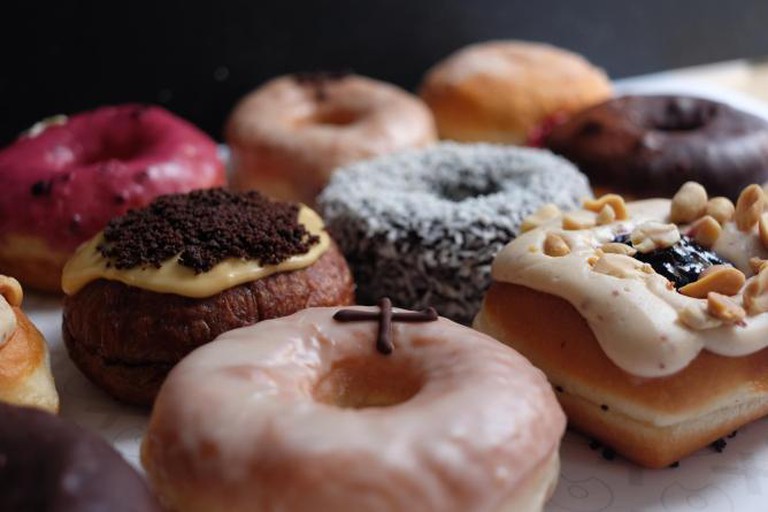 Feast Your Eyes | Photograph by Maz McEwan | Courtesy of Crosstown Doughnuts.
Betsy and Jo, founders of pop-up stand You Doughnut, have perfected the art of the bitesize doughnut, resulting in mouth watering morsels with a choice of toppings and sauces. The doughnuts are always fresh, ensuring that they are consistently delicious. Possible toppings include mini marshmallows, sprinkles, chopped nuts, and popping candy. Customers can also opt for chocolate, caramel, maple syrup, or hazelnut sauce. With a growing fandom attracted by being able to customise doughnut bites with sundae toppings, this pop-up is fast becoming a regular presence at festivals, markets and events all over London.

With multiple locations across the city and an impressive range of flavours rotated daily, Crosstown’s handmade fresh doughnuts are not to be missed. For a seasonal snack, the Pumpkin and Nutmeg Custard Doughnut is full of wintry flavour, including pumpkin sourdough, cream cheese icing, pumpkin seeds, and orange zest. Similarly, the Spiced Apple and Pear Crumble Doughnut is bursting with the taste of maple, pecan, and autumn fruits. A new take on the American classic, the Peanut Butter and Berry Square combines creamy peanut butter glaze with a homemade blackberry compote.

Chino-latino restaurants might not be the first thing that comes to mind when you think of cakes or pastries, but we promise that Asia de Cuba delivers two different types of doughnuts with bold flavours that pack a punch. The Cuban-style sweet potato buñuelos are more like churros than doughnuts, but they are not too heavy, and they’re especially good when dipped in the accompanying spiced sugarcane syrup. The Mexican doughnuts are equally delicious, with a choice of caramel or Thai chili chocolate dipping sauce – the perfect ending to a fantastic meal. 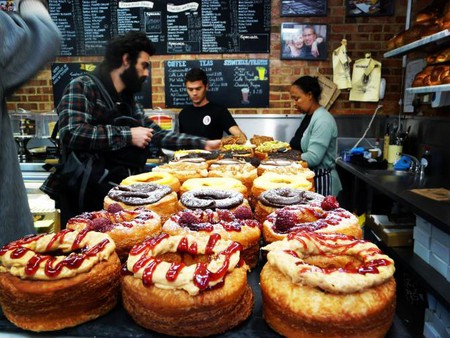 Boasting an impressive selection of breads, rolls, pastries, cakes, and freshly made sandwiches, family-run Rinkoff Wholesale Bakery certainly knows its stuff. However, setting aside the traditional, its recent foray into the delicacy known as a ‘cronut,’ a cross between a croissant and a doughnut, has been met with enthusiasm. Titled the ‘crodough,’ Rinkoff’s take on this hybrid snack includes nine different flavours. Many like the sound of the S’more Crodough, which is filled with creamy Nutella and topped with marshmallow fluff, or the sophisticated Salted Caramel and Pistachio. For an autumnal treat, you can’t do much better than the Toffee Apple Crumble Crodough, which combines apples, cinnamon, crumble, and sweet toffee fudge.

Despite not having a permanent establishment, pop-up Hole Donuts has been a success at private parties and events, and the company is working on organising more pop-ups in the future. Particular favourites include the picturesque Rose and Raspberry doughnut, which, despite looking almost too pretty to eat, oozes with flavour. With plans to get customers in the Christmas spirit, an intriguing-sounding gingerbread and lingonberry doughnut is on the way for the winter season, as well as a tasty take on the traditional Swedish saffron bun: a saffron and orange doughnut. Hole Donuts also offers a range of savoury flavours, including the adventurous Katsu Curry doughnut, which is filled with rich vegetable curry and topped with crunchy panko breadcrumbs. For a sophisticated palate, the sophisticated Rosemary and White Truffle oil doughnut is perfect. Truly, doughnuts have never been so diverse. 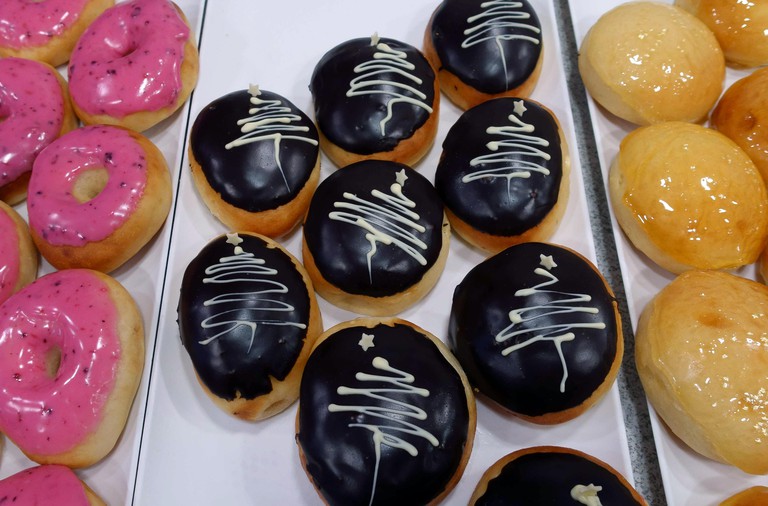 The doughnuts at Dum Dum have a lower fat content but are full of flavour | © Jeffrey Blackler / Alamy Stock Photo
Although the doughnuts sold at Dum Dum are technically more like buns, that hasn’t stopped it from rising to fame due to a low-fat, patisserie-style baking process that allows plenty of room for taste. Due to this popularity, Dum Dum is now able to offer bespoke doughnuts and a doughnut courier service, and it is planning to expand from its four current outlets to many more over the course of the next few years. Once you’ve tasted the Crême Brûlée Doughnut (full of creamy custard and toffee flavours), or the chocolate buttercream Zebra, there’s no going back. The lighter, fluffier texture and the lower fat content of these decadent doughnuts are sure winners.

With locations in Shoreditch, Brixton, and Camden, Blues Kitchen serves smoking Texan BBQ to the tune of live rhythm and blues. However, it also does fantastic deep-fried Oreo Donuts, accompanied by a salted caramel dip which has received rave reviews. For those who prefer savoury flavours, Crab Donuts are on the appetisers menu and are filled with Cajun crab meat and chipotle mayo for a sophisticated twist. 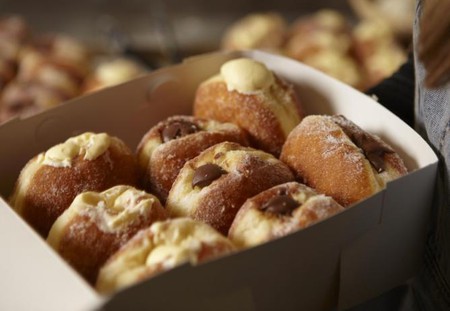 St John Bakery proves that old classics can’t be beaten with its range of jam and custard doughnuts. The different flavours of jam include peach, rhubarb, raspberry, apricot, and strawberry, and they are often combined with the Chantilly cream and crème patisserie custard to create timeless favourites. However, St. John also keeps things fresh by changing the doughnut flavours daily and developing with new flavours, a task the pastry chefs excel at. During the run up to Christmas, you can expect to see Rum and Raisin doughnuts, a particular favourite; Almond and Praline; Cinnamon and Apple; Marmalade Cream; and the very exciting Spiced Gingerbread doughnut. With queues often forming outside the bakery, especially at the weekend, make sure to get there early to avoid missing out.

The range of doughnuts at Bread Ahead is overwhelming and certainly caters to a wide variety of tastes. Among the most decadent are butterscotch and spiced apple custard, blackberry and vanilla ripple, and, for the more adventurous customer, quince and honey custard. Whichever you pick, you can be sure that there will be a generous amount of filling packed into every bite. Not only does Bread Ahead sell delicious fresh products, it also hosts a wide range of classes at its Baking School in Borough Market for all levels of expertise. With Christmas on its way, the school is currently offering Mince Pie, Gingerbread Ornament, and Christmas Cake Decorating workshops, which would make a lovely gift for friends and family.

BIRD in Shoreditch is probably best known for serving fried chicken and hot wings. However, what you might not be aware of is that the restaurant also offers some exceedingly tasty doughnuts, both on the dessert menu and from its very own Doughnut Hatch. Choose the popular ice cream doughnut sandwich for dessert, with whipped cream and two sauces, or head to the Hatch, which offers customers a range of doughnuts that change daily. Past favourites have included original glazed, cherry, coffee, and honeycomb, which is the ideal choice for a morning snack or an afternoon treat.