Books | © Ginny/WikiCommons
London has captured the imagination of authors for centuries and its historic streets, stations, parks, pubs and iconic landmarks have been preserved on the pages of our most treasured novels and plays. We compile our pick of the best literary locations that the capital has to offer.

Building
Big Ben, London | © neurotic_buddha/Flickr
Book Now
The streets of London act as a metaphor for the labyrinthine narrative of Virginia Woolf’s modernist novel ‘Mrs Dalloway’(1925). This text coincided with a period in which the dialogue between ‘self’ and urban living was a major ground of enquiry, pervading the imagination of several literary figures including TS Eliot. The motif of Big Ben, which stands at the north end of the Houses of Parliament and remains a quintessential part of the city’s skyline, pins Clarissa Dalloway to the chiming of the passing hours, ‘Out it boomed…the leaden circles dissolving into air.’The clock tower bears down on Clarissa’s consciousness, slicing her subjective mode of time as she navigates the social wasteland of public values. The ways in which Clarissa Dalloway and her suicidal double Septimus Warren Smith interact in the urban space is central to Woolf’s examination of modern perception in the aftermath of the Great War.
More Info
Open In Google Maps
Westminster, London, England, SW1A 0AA, United Kingdom
+442072194272
View menu
Visit website
Visit Facebook page
Send an Email
Give us feedback

Building, Market
Brick Lane | Brick Lane
‘Brick Lane’ (2003) by Monica Ali is named after the archetypal and vibrant street located in the heart of London’s East End Bangladeshi community. This astutely observed novel narrates the life of Nazneen, who moves from India to Tower Hamlets as a young bride of 18, in order to enter into an arranged marriage with Londoner Chanu. The novel recounts her struggles with marriage, adultery and adapting to life within the wider community. The colourful markets, galleries, restaurants and vintage shops on Brick Lane remain a popular attraction for tourists and Londoners alike. Brick Lane © Flickr/James Cridland
More Info
Open In Google Maps
London, United Kingdom
View menu
Visit website
Visit Facebook page
Send an Email
Give us feedback

Building, Market, Park
Dr Jekyll and Mr Hyde | Dr Jekyll and Mr Hyde
Influenced by the scientific discourses of the Late Victorian Era, the Gothic novella ‘The Strange Case of Dr Jekyll and Mr Hyde’ (1886) by Robert Louis Stevenson centers on the split personality of the respectable Dr Jekyll and his violent alter ego Mr Hyde. This doubling is echoed in the structural mapping of London. Located in the West End just off Oxford Street, Cavendish Square is a refined and wealthy ‘citadel of medicine’ and its eighteenth century George townhouses are inhabited by Dr Jekyll and his friend Dr Lanyon. After visiting Cavendish Square, wander to the buzzy entertainment district of Soho. These two areas are deliberately contrasted in the novel, with the latter acting as the sordid backdrop for Mr Hyde’s immoral behaviour.
More Info
Open In Google Maps
London, United Kingdom
View menu
Visit website
Visit Facebook page
Send an Email
Give us feedback

The junction of Finchley Road with West End Lane in Camden is the setting for a pivotal episode in Wilkie Collins’s ‘Sensation’ novel ‘The Woman in White’(1859.) The central protagonist and art teacher Walter Hartright encounters the mystifying and distressed Anne Catherick late one night when walking home from Hampstead, who is later tragically buried as Walter’s lover Laura Fairlie.

Dating back to the 16th century and now the only surviving coaching inn in the city, the celebrated George Inn was once located on a major transport route between the city, the surrounding counties and the Continent. Tucked away inside the cobbled courtyard of Talbot Square, this famous drinking establishment is adorned with lattice windows, wooden paneled galleries and open fireplaces and has been visited by literary greats including Geoffrey Chaucer, William Shakespeare and Charles Dickens. Many of Charles Dickens’ most famous works are inextricable from the topography of the capital and in ‘Little Dorrit’ (1855) Young Tip visits the George Inn, where he writes ‘begging letters.’ The neighboring Talbot Inn, demolished the 1870s, was where the pilgrim’s in Chaucer’s ‘Canterbury Tales’ set off on their pilgrimage to Canterbury. 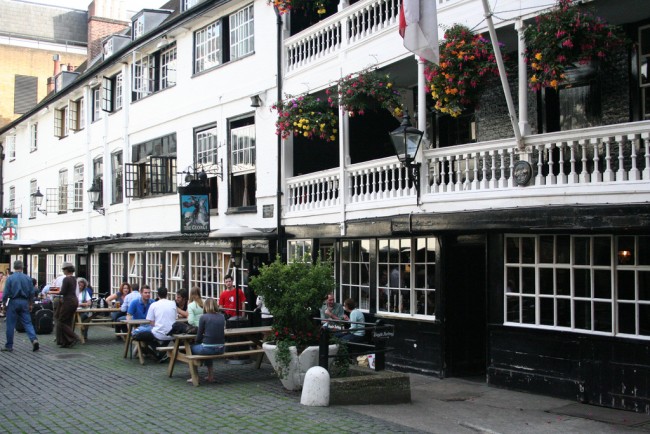 Park
Speke Monument, Kensington Gardens | © CGP Grey/Flickr
This magnificent Park is the setting for JM Barrie’s ‘Peter Pan in Kensington Gardens’(1906), which precedes Peter’s much loved adventures in Neverland. The novel narrates the story of Peter as a seven day old infant. He escapes out of the window of his London home into the park, befriends fairies and is granted his wish to fly, which he uses to return home to his mother. Originally the private garden of Kensington Palace, Kensington Gardens is planted with ornamental flowerbeds and majestic trees. It is one of the eight Royal parks in the city and together with Hyde Park, Green Park and St James’s Park is considered to make up the ‘green lung’ of the metropolis.
Established in 1798 by Thomas Rule, Rules is the oldest restaurant in London. One of its wood paneled dining rooms is dedicated to novelist Graham Greene, who used the restaurant as the backdrop for two dramatic rendezvous between adulterous couple Bendrix and Sarah in his wartime novel The End of the Affair.(1951) Serving traditional British food, this restaurant is fittingly decorated with red leather chairs, framed portraits, floral arrangements and a leaf printed red and gold carpet.
Senate House served as George Orwell’s inspiration for the Ministry of Truth in his dystopian novel ‘1984’(1949.) Protagonist Winston Smith spends his working days in the Ministry as a member of the Out Party, enduring a totalitarian existence under the surveillance of its figurehead Big Brother. Rated as one of London’s first skyscrapers, this landmark Art Deco building was used during the war by the Ministry of Information and is now home to the University of London’s world renowned library. Senate House | © An Siarach/WikiCommons
Originally designed by Sir Charles Morgan, the Edwardian baroque building of Victoria Station is the bustling locale of Jack Worthing’s obscure origins in Oscar Wilde’s ‘The Importance of Being Earnest’(1895.)Discovered in a handbag as a small infant, this incident is the principle catalyst for subsequent events in the play, which focuses on Jack’s aspirations to marry the aristocratic Gwendolyn Fairfax. The station remains a busy hub of transport today and houses the British version of the Venice Simplon Orient Express.
More Info
Open In Google Maps
London, England, W2 2UH, United Kingdom
+443000612000
View menu
Visit website
Visit Facebook page
Send an Email
Give us feedback
Book with our partner and we will earn a small commission.
Give us feedback