8 Quirky and Unusual Restaurants In London You Must Try 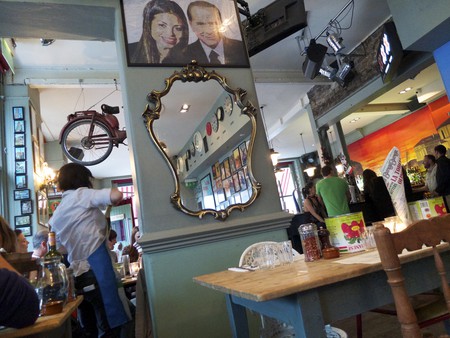 London is renowned for its Michelin-starred restaurants and for having challenged Paris for the title of the gastronomic capital of Europe. But if you are looking for a dining experience that goes beyond simply excellent cuisine, then London also boasts an extraordinary restaurant subculture that celebrates eccentricity, zaniness, and the downright odd. Here’s our guide to 10 of London’s quirkiest and unusual restaurants. 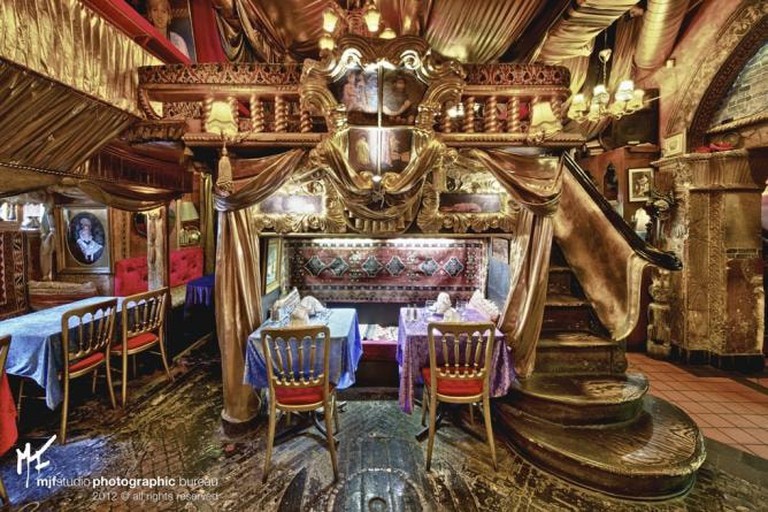 Image courtesy Sarastro
Sarastro is located on Drury Lane in the heart of the West End and London’s theatre-land, so has a wonderfully over-the-top and theatrical feel to it. This quirky restaurant, sited in an old pub, is named after a character in the Mozart opera, The Magic Flute. The interior features include banisters taken from the Royal Opera House, erotic artworks in the lavatories and old props and theatrical items dotted about. There are 10 opera boxes on three sides of the restaurant, each of them based on a different aesthetic style – so you will find an English, Gothic, Rococo, Byzantine, and Ottoman style area, with a Royal Box in the centre of the room. The cuisine is Mediterranean and Turkish in style and features dishes such as Anatolian lamb, chicken topkapi, veal chops, and a few French classics like boeuf bourguignon.
Open In Google Maps
Sarastro Restaurant, 126 Drury Lane, Holborn, London, England, WC2B 5SU, United Kingdom
+442078360101
Visit Website
Give us feedback 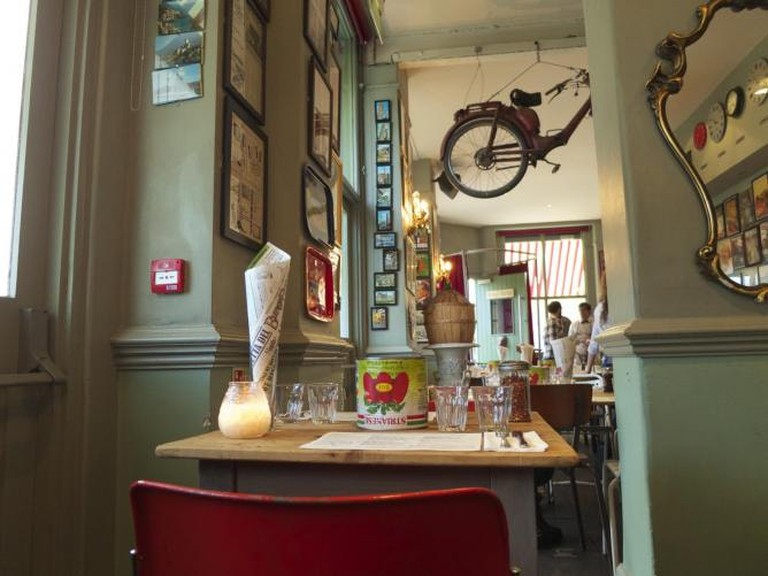 Image courtesy Bunga Bunga
Book Now
Taking its name from former Italian Prime Minister Silvio Berlusconi’s term for his sex parties, Bunga Bunga in Battersea is a mad collection of Italian kitsch and comic cliches. You enter the restaurant through an Italian phone box before meeting a bar, shaped in the form of a gondola, and murals of Venice on the walls. Karaoke nights are dedicated to opera classics and cocktails have names such as ‘The Colosseum’, ‘The Fiat 500’, and ‘The Leaning Tower of Pisa’. There is a tribute wall to Berlusconi and lamps made from old Vespa helmets. The food is mainly pizzas, including the wonderfully named ‘Julius Cheeser’ and others that reference attendees to Berlusconi’s soirees. There is a Sistine Stairway with a reproduction of Michelangelo’s work on the ceilings and walls.
Open In Google Maps
37 Battersea Bridge Road, Battersea, London, England, SW11 3BA, United Kingdom
+442070950360
Visit Website
Give us feedback

Restaurant, Italian, $$$
Facebook
Email
Twitter
Pinterest
Copy link
Share
Map View
At first glance, Buona Sera on the King’s Road in Chelsea might sound like any other Italian restaurant in the capital. The menu is contemporary Italian so expect a wide range of antipasti, secondi, and pasta and risotto dishes, with unusual Italian wines such as Pinot Grigio, Barbera, and Sangiovese. Particular secondi to watch out for include lasagne bolognese, spaghetti di mare, fricassee di pollo, spiedino di carne and bistecca. Where Buona Sera gets quirky is in the interior design and their approach to seating, as the tables and seats are arranged on two levels as if they were bunk beds. This means that if you are seated on the second level your food will suddenly appear in the hands of a waiter who must display amazing skill as they climb up a ladder with plates in hand – it certainly makes for an unusual evening.
Open In Google Maps
289 King's Road, London, SW3 5EW, United Kingdom
+442073528827
Visit Website
Give us feedback

Dans le Noir? is a concept that emerged in the late 1990s in France before the first restaurant opened in 2004. There are now Dans le Noir? restaurants in London, Paris, New York, Brussels, and Barcelona. The concept is simple – all of the food is served in total darkness, by waiting staff who are blind and from menus that are kept deliberately vague. The thinking behind this approach to dining is that by cutting off the sense of sight, the other senses, of smell and taste, will be heightened and excited to a greater extent. Diners must rely upon the blind waiting staff who are the only ones to know what is being served. Diners enter the bar area where they must remove all items that give off light and choose from one of four set menus – the Red, which offers meat dishes, the Blue, which is seafood, the White, which is exotic, and the Green vegetarian option. No more about the food is revealed until after the meal.

Restaurant, Bar, British, $$$
Facebook
Email
Twitter
Pinterest
Copy link
Share
Map View
Powder Keg Diplomacy is set in a Victorian conservatory with original iron features and provides food and drink inspired by Victoriana, patriotism and the British Empire, with recipes drawn from old cookery books and using ingredients sourced from rare breed suppliers and independent breweries. This quirky restaurant was established in 2011 with a menu that serves up classic British cuisine, such as Orkney crab, English grilled asparagus, Scottish salmon, Romney Marsh lamb and a cheeseboard that includes Waterloo, made with Guernsey milk, and Smoked Lincolnshire Poacher. The wines and beers on offer are also extensive – there are cocktails made according to old recipes and using classic London gins and liquors, beers from amongst the 40 microbreweries in London, and wine from English vineyards in Kent, Sussex and Gloucestershire. If you fancy something French you can choose a vintage from the ‘Friend and Foes’ menu too.
Open In Google Maps
147 Saint John's Hill, London, England, SW11 1TQ, United Kingdom
+442074506457
Visit Website
Give us feedback
Book Now

Cafe, Restaurant, Thai, $$$
Facebook
Email
Twitter
Pinterest
Copy link
Share
Map View
The Cats Café des Artistes in Finsbury Park is run as a family restaurant with a slight difference. The theme is Thai – only taken to the extreme. There is a tuk-tuk parked up as you enter to restaurant, images of the King and Queen of Thailand, and the furniture is of dark wood that was brought all the way from South East Asia. The owners also have a penchant for cats – there are statues of domestic cats, wild cats, and cats from the jungle. On the walls are also signed celebrity photos, so you sit and enjoy food with such British luminaries as Michael Caine, Jeremy Beadle, and comedy duo Ant and Dec watching over you. The menu is, of course, Thai so expect spring rolls, stir fry meats, spare ribs, curries and lots of seafood.
Open In Google Maps
79 Stroud Green Road, Finsbury Park, London, England, N4 3EG, United Kingdom
+442072815557
Visit Website
Give us feedback 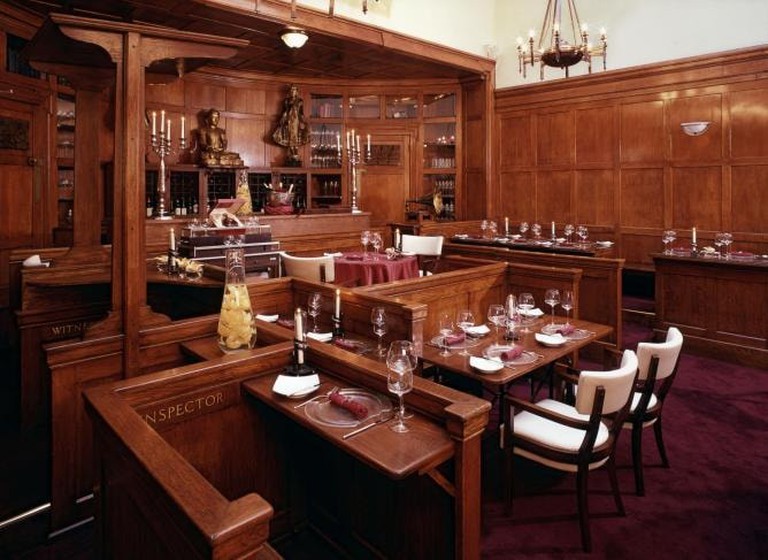 Image courtesy Silk at the Courthouse
Silk is part of the 5-star Courthouse Hotel in Soho that was once the Great Marlborough Street Magistrates’ Court. The building dates back to the early 1800s and has an extraordinary history. It was here that Charles Dickens was a young court reporter, Oscar Wilde pursued a libel claim against the Marquis of Queensbury, and Keith Richards and Mick Jagger were prosecuted for the possession of drugs in the 1960s. Silk is based in the old Court No.1 and still possesses the original wooden panelling and courtroom layout. The name plays both on a barristers’ silk gown and the Silk Road to the Orient as the menu focuses upon Eastern flavours and spices. The cuisine is variously Indian, Chinese, and Thai and incorporates Eastern spices with British produce. Look out for signature dishes such as jungli maas – Kentish roe deer with chilli paste and smoked vegetables.
Open In Google Maps
19-21 Great Marlborough Street, West End, London, England, W1F 7HL, United Kingdom
+442072975555
Visit Website
Give us feedback

Restaurant, African, $$$
Facebook
Email
Twitter
Pinterest
Copy link
Share
Map View
Archipelago in Fitzrovia serves up all the types of meal that you have heard of being consumed in the tropics of Africa and in the Far East, but have never had the opportunity to try. In fact, you might not have been aware that you even wanted to try them. Entering the restaurant you encounter a world of culinary delight. On the menu you’ll find exotic ingredients such as crocodile, snakemeat, mealworms, and various insects. The decor is a similarly international flavour, as you will find golden Buddha statues, dwarf palm trees, and peacock feathers. Dishes to watch out for include crocodile in vine leaves, zebra jerky with biltong and boerewors, pan-fried chermoula crickets, bison rump, kangaroo skewers, and escolar fish steak – supposedly the most dangerous fish to consume in the world.
Open In Google Maps
53 Cleveland Street, Fitzrovia, London, England, W1T 4JJ, United Kingdom
+442076379611
Visit Website
Give us feedback

Still looking for an interesting dining experience? Check out our list of the best restaurants in Soho, London.