The 9 Best Spanish Restaurants And Tapas Bars In London

The past five years have seen an explosion in tapas bars and Spanish restaurants in London, from swanky Soho joints to hipster hangouts in Shoreditch. We’ve chosen the 10 best spots for drinks, tapas or an evening meal of fine dining, which span the range of Spanish cuisines from Basque to Catalan. 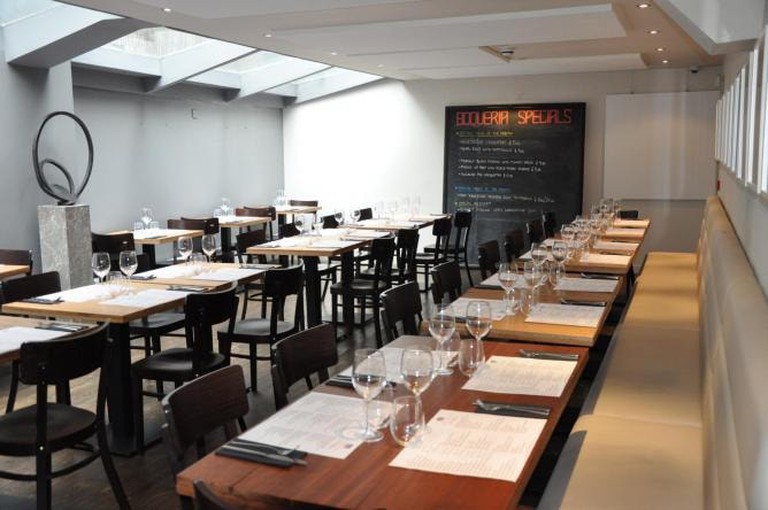 Named after a market in Barcelona, Boqueria has a simple interior, with long rows of tables and a cheerful blackboard announcing the day’s specials. Situated in Clapham, a friendly area south of the river, the restaurant serves tasty tapas plates with a contemporary twist. Traditional tapas favourites like croquettes and Iberian ham are joined by suckling pig with parsnip and apple sauce, hake with prawns and mussels, and cod loin on ratatouille. For dessert, try the traditional Santiago almond cake with ice cream. All meals here are artfully presented with garnishes and swirls of sauce, fitting the modern aesthetic of the restaurant’s decor. 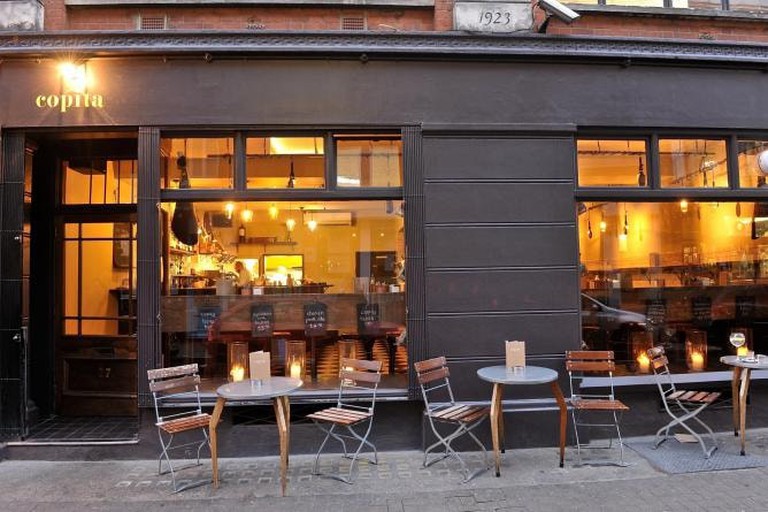 Image Courtesy of Copita
Book Now
Copita’s soft lighting, chocolate-brown exterior and outdoor tables make it the perfect spot for a romantic drink or summer dinner. Located in the centre of Soho, it serves up exquisite small plates of unconventional tapas, from sherry-braised pig cheeks to duck-egg yolk with piquillo and white truffle or an aubergine stew. The restaurant is named after the word for a small wine glass, and accordingly has an impressive Spanish wine and sherry list. Desserts match the tapas tone, coming in small portion sizes which encourage you to try a few; the custard tart and rosewater ice cream both come highly recommended.
Open In Google Maps
27 D'Arblay Street, West End, London, England, W1F 8EP, United Kingdom
+442072877797
Visit Website
Give us feedback

Bar Tozino’s entrance under the red brick arches of Maltby street is framed by heavy velvet curtains at the sides, and impressive display of hanging hams from the ceiling. Inside, its dim lighting and functional decor bely the delicious Iberian delicacies on offer.The restaurant started as a stall at the Maltby Street Market, and eventually expanded into the bodega-like archway location it occupies today. The menu is small, but perfectly formed: sample one of the five carved ham selections with a bottle of Moritz, a native Catalan beer, or a selection of the tapas of the day.

This recently opened tapas bar is owned by brothers Sam and Eddie Hart, who are making a splash on the London restaurant scene. The pair take a dim view of bookings, so it’s first come first served, and Barrafina’s central location means it’s sometimes tricky to get a table. Once you’re inside, it’s worth the wait, with a great selection of Mallorcan and Catalan dishes including a mean coca Mallorquina (Mallorcan pizza) and a wine list filled with Spanish favourites. The layout brings you up close and personal with food prep, with seating looking into the open kitchen and racks of fresh vegetables and fish.

Restaurant, Spanish, $$$
Facebook
Email
Twitter
Pinterest
Copy link
Share
Map View
Housed behind a glowing white shopfront in Marylebone, Donostia serves Basque twists on classic dishes. Its interior is stripped back and modern, with white and blue tiling, a marble counter, low wooden chairs and barstools looking onto the open kitchen. There’s also a terrace outside for alfresco summer dining. On the menu are cold platters of meats and fish and a large tapas collection. Try the crispy cod cheeks with black squid ink aioli, or the octopus in traditional Basque marinade. The desserts are as authentically Basque as the mains, and include torrija (bread soaked in milk and spices, then fried in egg) and txokolatea (a chocolate and orange mousse).
Open In Google Maps
10 Seymour Place, London, W1H 7ND, United Kingdom
+442036201845
Visit Website
Give us feedback

José is a sherry and tapas bar occupying a street corner on Southwark’s trendy Bermondsey Street. It’s a busy, casual spot with a chocolate-brown interior, atmospheric lighting and high bar stools ranged around high tables. On the menu are a wide range of tapas, from the standard (patatas bravas) to the more adventurous (pisto with crispy duck egg), classic Iberico ham and a changing list of daily specials. There’s a wide selection of sweet or dry Spanish sherries and the atmosphere matches that of an authentic Spanish tapas bar, where customers pop in for a drink or have some tapas plates while standing round the barrels provided to aid standing diners.
Open In Google Maps
104 Bermondsey Street, Bermondsey, London, England, SE1 3UB, United Kingdom
Visit Website
Give us feedback 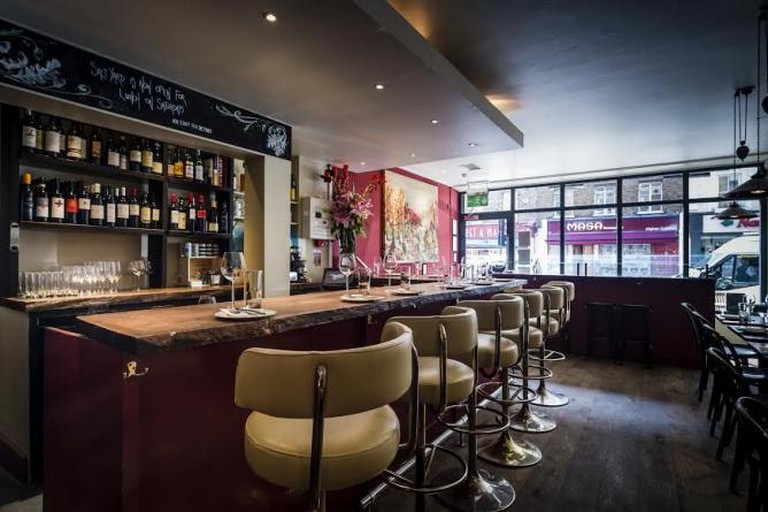 Salt Yard | Courtesy Salt Yard
Book Now
This charcuterie bar and restaurant focuses on the sourcing and skill put into their meats. Don’t expect the hustle and bustle of other Spanish joints in London. Salt Yard’s signature dish is delicate battered courgette flowers stuffed with cheese and flavoured with honey, but even the basics are a cut above, from the lightly charred bread to the Nocelleria olives. Then even release one of their recipes each month so you can replicate their signature cuisine at home.
Open In Google Maps
54 Goodge Street, Fitzrovia, London, England, W1T 4NA, United Kingdom
+442076370657
Visit Website
Give us feedback

Brindisa are, first and foremost, a food importer, bringing hams, cheeses and other mainstays of Spanish cuisine to London. But with five restaurants throughout the city, Brindisa Kitchens have rightfully claimed their place as the home of authentic Spanish food in London. Tapas Brindisa London Bridge, their restaurant in foodies’ haven Borough Market, showcases Brindisa’s produce and traditional recipes in a cosy environment, complete with photographs of the Spanish countryside and cheerful red walls. The ham, by itself or doused with olive oil and pomegranate seeds, is divine, and their chicken liver on toast combination is perfectly juicy and crunchy. The Rupert Street location, where the buzz of Soho and Chinatown meet the bright lights of Piccadilly and Leicester Square, is all about cooking on fire, inspired by the asadors of Castilian-Leonese cuisine. Expert ham carving, precision charcoal cooking and artisan cheeses sit alongside a sensational selection of seasonal tapas and picoteos. Be sure to grab seat at the 360-degree dining counter, and watch the theatre of the open kitchen.
Open In Google Maps
18-20 Southwark Street, London, England, SE1 1TJ, United Kingdom
+442073578880
Visit Website
Give us feedback 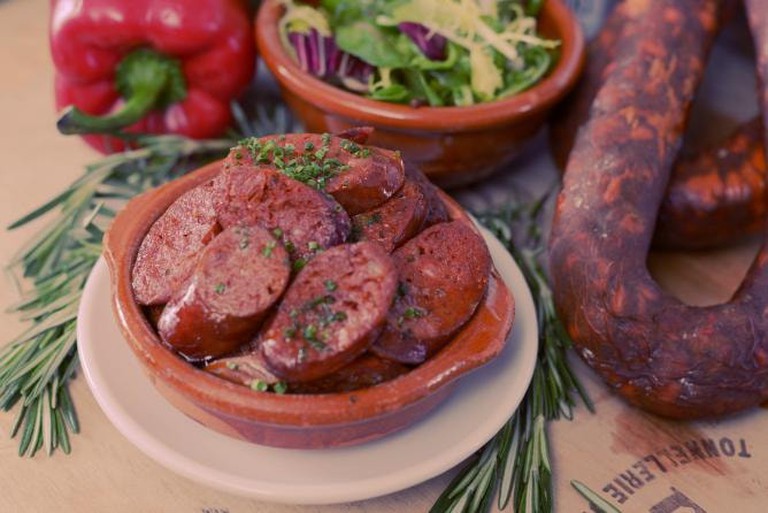 Camino, in King’s Cross, prides itself on authenticity. To prove their credentials sends staff members for reconnaissance trips to Spain twice a year. Head chef Nacho del Campo has created a menu inspired by the diverse culinary culture of his home country, which he presents in a modern style with an emphasis on punchy flavours and full bodied presentation. Highlights of the King’s Cross menu include Cornish monkfish wrapped in pancetta with leek gratin and a rich romesco sauce, and pigeon breast served on creamy pearl barley with Torta de la Serena cheese. For braver patrons there is a whole roasted Segovian style suckling pig, which can serve up to twelve people, and requires 48 hours’ notice. The Full Spanish Breakfast, meanwhile, proves that Spain does brunch better than almost everyone. The many late night events offer opportunities to enjoy Camino’s extensive cocktail menu.

Still looking for somewhere to eat? Check out our guide to the best Brazilian restaurants in London.