The Reason London Is Renowned For Being Foggy

From the 18th century until 1962, a more menacing climatic occurrence than inclement weather came to define London winters. Not for them the gentle rains and grey skies so characteristic of English life, but instead the regular incidence of ‘London particulars’: pollutant-heavy, sun-blocking fogs. In her new book, London Fog: The Biography, Christine Corton takes us through the history of these remarkable events, and analyses the profound impact their existence has had upon the arts, from Charles Dickens to Claude Monet. 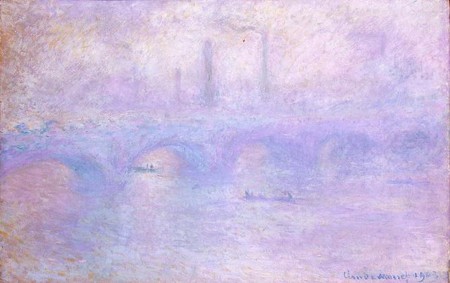 ‘Fog everywhere. Fog up the river, where it flows among green aits and meadows; fog down the river, where it rolls defiled among the tiers of shipping, and the waterside pollutions of a great (and dirty) city. Fog on the Essex Marshes… Fog in the eyes and throats of ancient Greenwich pensioners, wheezing by the fireside of their wards; fog in the stem and bowl of the afternoon pipe of the wrathful skipper, down in his close cabin; fog cruelly pinching the toes and fingers of his shivering little ‘prentice boy on deck. Chance people on the bridges peeping over the parapets into a nether sky of fog, with fog all around them, as if they were up in a balloon, and hanging in the misty clouds.

Gas looming through the fog in divers places in the streets, much as the sun may, from the spongey fields, be seen to loom by husbandman and ploughboy. Most of the shops lighted two hours before their time — as the gas seems to know, for it has a haggard and unwilling look.

The raw afternoon is rawest, and the dense fog is densest, and the muddy streets are muddiest near that leaden-headed old obstruction, appropriate ornament for the threshold of a leaden-headed old corporation, Temple Bar. And hard by Temple Bar, in Lincoln’s Inn Hall, at the very heart of the fog, sits the Lord High Chancellor in his High Court of Chancery.

Never can there come fog too thick, never can there come mud and mire too deep, to assort with the groping and floundering condition which this High Court of Chancery, most pestilent of hoary sinners, holds this day in the sight of heaven and earth.’

This passage, from the famous opening to Dickens’s masterpiece Bleak House, does much to show the unique aura great London fogs had in the eyes of artists. The modern reader will surely find it interesting to note that this description isn’t as much of an overstatement as it first appears. Indeed, the phenomenon reached its peak in the 1890s, with an average of 63 foggy days a year, and wasn’t exactly harmless: 4,000 people are said to have died during the Great Smog of 1952. In an extract from her book, Christine Corton explains how these ‘pea-soupers’ came to be: 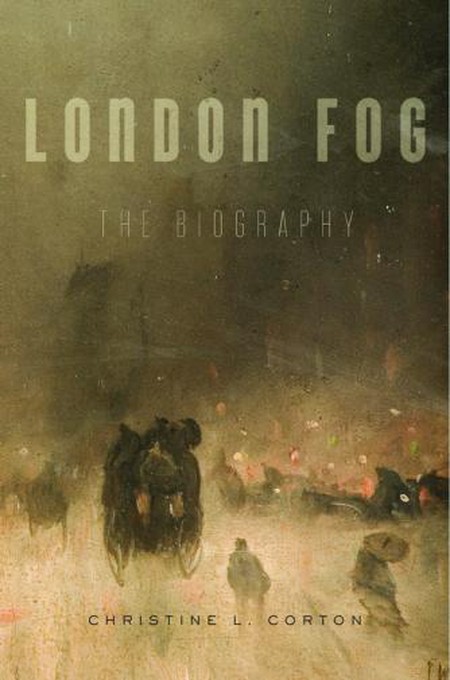 The reason for the increase in the number of foggy days in London town was not some change in the climate but a rapid increase in the quantity of pollutants, above all from coal fires, that mixed with naturally occurring water vapour at times of temperature inversion to create a London fog, coloured yellow from the sulphurous emissions trapped beneath the cold air above the city. The more smoke and soot in the atmosphere, the more likely a fog was to form and the longer it was likely to last. And in the 1820s and 1830s smoke and soot from coal fires were spreading through the air in ever-increasing quantities as the city began to grow apace with the impact of the industrial revolution. London’s population, around a million in 1800, had grown to one and a half million twenty years later and passed the two million mark in the 1830s. Helped by the growth of communications — canals, metalled roads, and by the 1830s railways as well — London was becoming an economic hub, with industries typical of a major city, such as paper, printing and publishing, instrument engineering, gas and power, chemicals, leather and luxury goods, and, even more important in terms of population growth, public administration, the law, and professions and services of many kinds. As hundreds of thousands of people flocked to the capital to find work or make their fortune, new suburbs emerged, extending the city’s housing in all directions; and every house had its coal fire, belching quantities of sulphur-laden smoke into the air during the winter months.

Other parts of the country were growing fast during these decades too, and other centres of industry also suffered from polluted air: the ‘Black Country’ in the West Midlands got its name around this time from the soot and smoke that covered it; Edinburgh had for many years been known by its soubriquet ‘Auld Reekie.’ But there was nothing quite like London fog. True London fog was thick, persistent, and above all basically, though not exclusively, yellow in colour. In a genuine London fog, as the writer Edward Frederic Benson (1867 – 1940) noted in his novel Image in the Sand (1905), ‘swirls of orange- coloured vapour were momentarily mixed with the black,’ and ‘all shades from deepest orange to the pale gray of dawn succeeded one another.’ Later scientists studied the colours of the fogs in order to work out what caused them. Soot particles could change the colour from yellow to brown in patches. In 1853 a fog was described as ‘grey-yellow, of a deep orange, and even black.’ What would be a white mist in the country, one newspaper commented in 1901, ‘becomes a brown, sometimes almost black, one in the metropolis’; ‘Our myriad chimneys pour forth smoke — or innumerable particles of unconsumed carbon — producing the effect of mud in water.’ Joseph Ashby-Sterry (1838 – 1917), in his poem November, wrote succinctly. ‘’Tis sometimes yellow, sometimes brown. A London Fog!’

The yellow colour was caused by the fog’s high sulphur content. A scientific study of urban fog published in 1896 noted: ‘Town fog is mist made white by Nature and painted any tint from yellow to black by her children; born of the air of particles of pure and transparent water, it is contaminated by man with every imaginable abomination. That is town fog.’ For Londoners a typical November fog was predominantly yellow, coloured by the greater proportion of home fires in the capital: ‘When the Major returned to London, which he did in time for the fogs of November, . . . the valet was arranging his toilette in the deep yellow London fog,’ as William Makepeace Thackeray (1811 – 1863) put it in his novel Pendennis, published in 1850. Black it may have been in parts, especially when the soot content was high, but overall true London fog was mainly coloured yellow, as one observer after another noted from the 1840s onwards. One writer recorded a conversation on the topic in 1853:

‘What a dreadful fog there is to-day!’

‘Nothing of the kind, Madam. Cloudy and wet, perhaps, and a little misty; but a fog — no Madam, that haze is not a fog. Fogs are yellow and black; in a fog, the carriages and foot-passengers run against one another. It hurts your eyes, and takes away your breath; it keeps one in doors. But this is not what a Londoner would call a fog.’

London fog had been born; now it had to be given a name.

Extracted from London Fog: The Biography by Christine L. Corton, published by The Belknap Press of Harvard University Press, £22.95. Copyright © 2015 by the President and Fellows of Harvard College. All rights reserved.