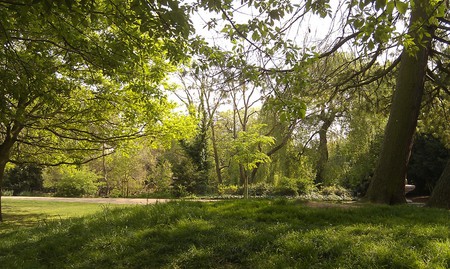 This lively area has been a permanent fixture on London’s art and culture maps since the early 2000s, and continues to evolve and attract artists, culture lovers and the trendy crowds. Our guide to Peckham explores the area’s history and thriving art scene, including six must-see contemporary art spaces.

Peckham hit the hipster map in 2007 with the launch of Bold Tendencies, a sculpture project that took over the top four floors of the multi-storey carpark on Peckham Rye. Now an annual pilgrimage for anyone with an interest in cutting-edge contemporary art, it is equally famous as the site of Frank’s Café – the summer pop-up bar on the rooftop with arguably one of the best views in London to admire over a Campari cocktail. But there is a lot more to see and do in Peckham besides. The regeneration of Peckham might be said to have begun with the new library at the top of Rye Lane, which won the Stirling Award for architectural innovation in 2000. Since then Peckham’s status as a destination for emerging arts and music has increased rapidly. Anthony Gormley’s bollards and manhole covers appeared in 2003, and the Arches along Blenheim Grove beneath Peckham Rye station are home to a well-established community of artists and craftspeople. Next up is the wholesale redevelopment of the station itself, which will aim to clear an open piazza in front of the ticket office, revealing the handsome Victorian façade – and also, in a parallel move, restoring the grand Old Waiting Room for use as a community arts and events venue.

All this has resulted in a wealth of new venues clustered around Peckham Rye. First off in the art stakes is the Hannah Barry Gallery. As the driving force behind Bold Tendencies, Hannah Barry has been part of the art scene in Peckham for some time; however, it was only in November 2013 that her permanent gallery space officially opened in the renovated meatpacking factory on Elm Grove with a three-part performance piece by Tom Barnett, titled The Beautiful Game.

Building, Library, School, University
Facebook
Email
Twitter
Pinterest
Copy link
Share
Map View
Hot on its heels, Peckham Platform was launched in January 2014, taking over the stand-alone gallery on the library forecourt previously known as Peckham Space. The essential change is its new independent charity status (detached from the University of the Arts London) and, pioneered by its Director, Emily Druiff, the space aims to create a ‘meaningful and accessible social arts practice for Peckham and beyond’, supporting both artists and communities in building a ‘positive cultural experience’ and sense of place. The inaugural exhibition was Ruth Beale’s Book Bed, followed by Intoart and Tuke School: Practice Makes,which showed works ensuing from the collaboration between pupils from Tuke School and artist mentors from Intoart.
Open In Google Maps
Copeland Park, 133 Copeland Road, Peckham, London, England, SE15 3SN, United Kingdom
+442073589645
Visit Website
Give us feedback 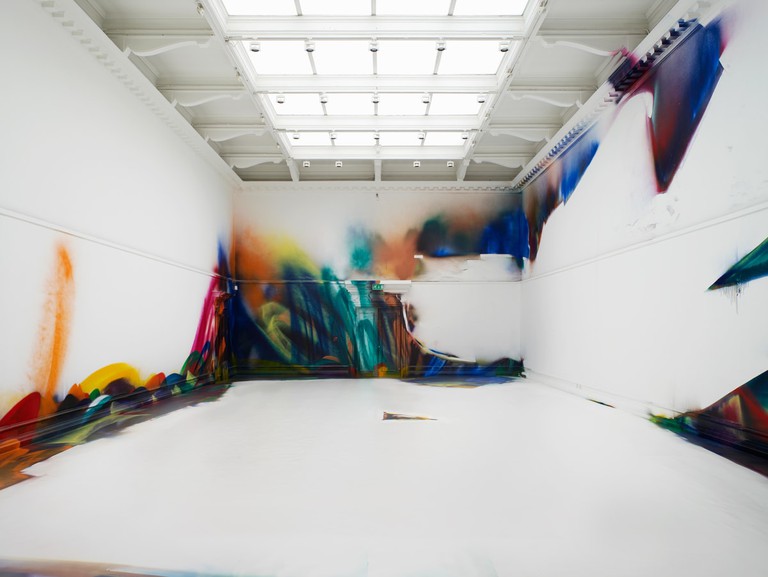 Katharina Grosse, 'This Drove my Mother up the Wall', 2017 | © Andy Keate
In such bright young company, the South London Gallery further along Peckham Road seems an old established presence. Yet despite being in situ since 1891, the art is very far from being staid or traditional. Its cutting-edge exhibitions, installations and live art and film events give a platform to both well-known British and international figures and emerging artists. The completion of building works in 2010 has allowed for a programme of annual artist residencies as well as a delectable café, ‘no.67’. Welcome to Iraq, on show until 1 June, shows work by eleven contemporary artists from Iraq who were selected to represent their country in the 2013 Venice Biennale. Enveloped in a Middle Eastern ‘salon’ atmosphere, the visitor can discover something of the nature of everyday life in Iraq as it emerges from its turbulent recent history through an eclectic range of media.
Open In Google Maps
65 Peckham Road, London, England, SE5 8UH, United Kingdom
+442077036120
Visit Website
Give us feedback 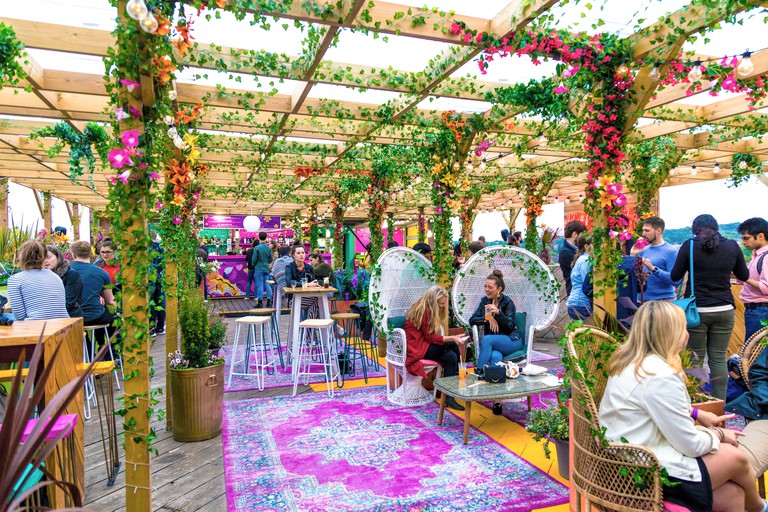 The Bussey Building is a multi-use complex | © Nathaniel Noir / Alamy Stock Photo
The Bussey Building, within Copeland Industrial Park behind Rye Lane, is named after a manufacturer of cricket bats in the mid-19th century. Saved from demolition by a community-based campaign in 2009, it now houses a multitude of primarily arts-based businesses and events. Central to these is the CLF Art Café, which has turned part of the 120-year-old warehouse into a ‘21st Century Church of the Chill’, a multi-purpose café, art gallery and performance space, also hosting regular Friday and Saturday nights such as the South London Soul Train. From the recent promenade production of Purcell’s opera Dido and Aeneas by Opera in Space, to the upcoming Write Here … Right Now, a new annual writers’ festival showcasing the best in new theatre, cabaret, film, music and opera, this is a haven for all the arts.
Open In Google Maps
133 Rye Lane, Peckham, London, England, SE15 4ST, United Kingdom
+442077325275
Visit Website
Give us feedback 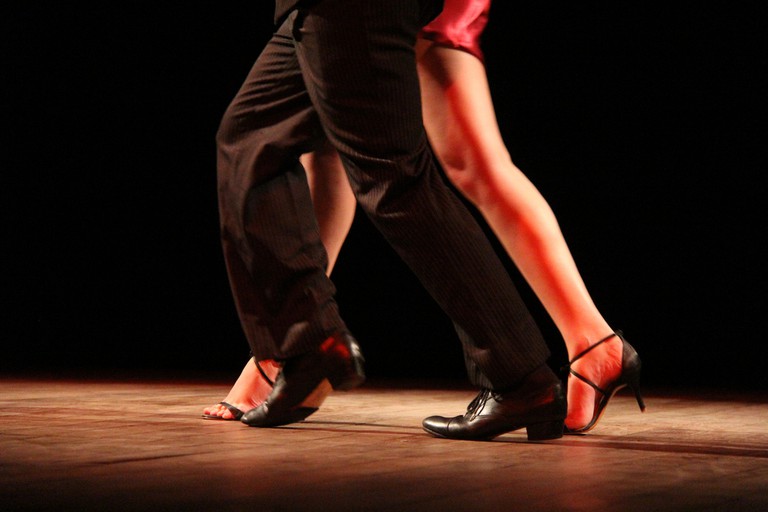 Peckham Liberal Club hosts tango nights, swing dancing, film nights, orchestral concerts, music gigs and jazz nights | © Cecilia Heinen / Flickr
A rival has emerged, however, just across the road at 24 Elm Grove. The Peckham Liberal Club, a working man’s club that has been a part of the Peckham community for over a century, has seen a recent revival. Actively seeking to attract new members, the club not only offers the old-school attractions of bingo, darts and four full-size billiards tables, as well as two bars, but has also begun to put on regular events in the central dance hall. There are tango nights and swing dancing, film nights, orchestral concerts, music gigs and jazz nights. The club recently played host to Holy Holy, with members of David Bowie’s band playing all the hits.
Open In Google Maps
24 Elm Grove, Peckham, London, England, SE15 5DE, United Kingdom
+442076391093
Visit Website
Give us feedback

Concert Hall, Theater
Facebook
Email
Twitter
Pinterest
Copy link
Share
Map View
A little further afield Asylum runs a derelict chapel at the heart of the almshouses in Caroline Gardens, originally built as the Licensed Victuallers Benevolent Institution Asylum. This beautiful, atmospheric space has been run since 2010 by two artists, who formed the company Maverick Projects, and welcomes events from theatrical productions to art exhibitions, film shoots and weddings; it was recently filmed for a piece in the new Ruin Lust exhibition at Tate Britain. Now Maverick Projects are hoping for the same success with the Safe Houses, two decaying Victorian terraces on Copeland Road which, in December 2011, housed the pop-up Peckham Hotel.
Open In Google Maps
Caroline Gardens Asylum Road, London, England, SE15 2SQ, United Kingdom
+447539595158
Visit Website
Give us feedback
Give us feedback