London 2012, 4 Years On: How Stratford Has Transformed 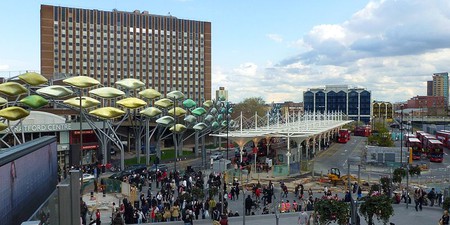 In 1722, Daniel Defoe visited Stratford, remarking that it had ‘increased in buildings to a strange degree, within the compass of about 20 or 30 years past at the most…this increase is, generally speaking, of handsome large houses being chiefly for the habitations of the richest citizens’. If only Defoe could see it now. With the Olympics about to kick off in Rio, we take a trip back to Stratford to discover its story, and just what became of the legacy of London 2012.

Once a predominantly agricultural area, Stratford experienced a period of economic overturn in the late 18th to early 19th centuries, becoming a site of industry when the polluting chemical plants and printers that had been banned in the city centre relocated there. The opening of the nearby Royal Docks from the 1850s was to greatly increase Stratford’s importance as a centre for transport and manufacturing. The area was impoverished and deprived throughout the 19th century and economic decline struck in the 20th, with Stratford becoming a site of class rioting during the interwar years, its economic decline made all the worse when the Royal Docks wound down in the 60s and closed in the 80s.

The history of Stratford’s regeneration starts half a century before the 2012 Olympics, in the 1960s, when homes were built to replace the pre-fab housing that stood on stretches of land that had been left as literal bombsites since the 40s. Stratford Shopping Centre was opened in the 1970s, while a library, cinema, and theatre opened in the 90s. Altogether, the town centre became a far more attractive place.

In the last 10 years, the home of the 2012 Olympics has undergone redevelopment on an extraordinary scale, with high-rise luxury accommodation sprouting out of the ground in a race to the top. The new structures that join the East Village — the former Athletes Village since turned into ready-made residential accommodation — are several luxury hotels, office towers, and the glittering Westfield Centre, one of Europe’s largest urban shopping centres, which opened in 2011. It was all built as part of one master plan called Stratford City, which aimed to turn Stratford into a vibrant, metropolitan centre for London. The plan worked — today, Stratford is known as ‘the capital of the East’. 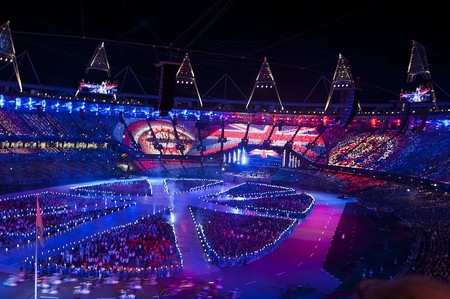 Work began in 2007 and was completed by 2012, along with an obligatory facelift for the existing town centre. The front of the ugly 1970s shopping centre (which, as a public right of way, is a brilliant place to walk through at night, when it’s taken over by a crowd of rollerskaters and their beatboxes) just across from Westfield was given a bit of a revamp but, for the most part, was hidden behind a strange, scaly, iridescent fish sculpture named ‘The Stratford Shoal”. If the Chinese were accused of temporarily disneyfying Beijing in 2008 with cut-corner measures, perhaps this attempt to hide the ‘undesirable’ side of Stratford tells us something about the legacy of 2012.

Glossy plans for Stratford’s regeneration programme are littered with buzzwords and key phrases. ‘Residents are at the heart of our plans to develop Stratford’, said Mayor of Newham Sir Robin Wales in 2011, ‘We want to build homes that will create new family neighbourhoods within easy reach of excellent schools, parks and public transport…because we believe our residents deserve the best’. Five years on and it’s safe to say not everyone agrees. For a start, there’s the glaring fact that the entire development was given its own postcode, E20, to be shared by five new neighbourhoods created post-Olympics, which doesn’t exactly scream ‘coherent community’ to the E17 neighbourhood to the North or E15 to the South.

So much change in so short a period of time was always going to be jarring, but issues with Stratford’s regeneration cannot be simply put down to a general hostility towards progress. With a host of social issues within the wider borough of Newham, the rapid influx of prosperity to the area has exacerbated feelings of division — ‘I can’t help but feel that Newham residents are somehow missing out. To me, there is a clear divide of them and us’, one resident told The Guardian.

Figures compiled from 2013-2015 paint a stark picture of Newham compared to other London boroughs— it’s home to some of the highest levels of child poverty, unemployment, and the highest amount of working people on low pay. Each of these statistics came from the years following the Olympics, with Newham also numbering among one of the worst London boroughs for inequality, suggesting that the prosperity of the Stratford City and Olympic Village developments is not benefitting the community at large.

Residents of old Stratford now complain of £5 cappuccinos, street traders in the market being replaced by pricey artisan stalls, and of course, ridiculously high rents in the new developments’ ‘affordable’ housing offerings, which are leased at around 80-90 percent of their market rates and which many locals claim no one living in the area before would be able to afford. House prices in Stratford have risen 60 percent since 2010, compared to 36 percent in the rest of London. It’s a fashionable place to live nowadays — bad news for those that grew up here.

Stratford hit headlines for the wrong reasons in 2013, when a group of single mothers living in the Carpenters Estate— which is so close to the Olympic Park it’s almost inside it — were served eviction notices after the Focus E15 hostel for young homeless people had its funding cut. After being informed by the council that they would have to be rehoused in rented accommodations as far away as Manchester due to a lack of affordable housing in the borough, the mothers occupied a derelict but functional house on the estate, which had been earmarked for demolition. The campaign drew national attention, and became a symbol of the so-called ‘social cleansing’ taking place across the borough and London at large. 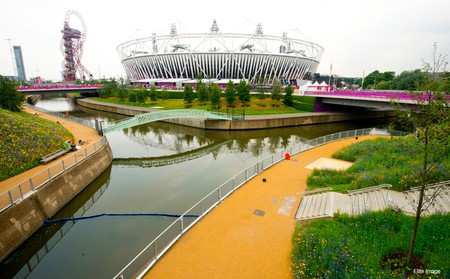 Of course, nobody can deny that there have been enormous aesthetic benefits as well. You could talk about regeneration until you’re blue in the face but the fact is that a lot of the now redeveloped areas in Stratford and Newham were hell on earth (or possibly gritty character, depending on which way you look at it). The waterways were filthy, much of the open grass spaces were marshland, many of the industrial units and factories around Pudding Mill Station towards Bow were derelict and Fridge Mountain, a 20-foot-tall mound of discarded fridges and the biggest dumping ground for white goods in Europe, lay where Zaha Hadid’s beautiful Aquatic Centre now stands. The Olympic Park is now filled with green spaces which are open to the public, where landscaped gardens sit alongside meadows filled with wildflowers, while wetlands along the River Lea’s waterways provide new habitats for birds and insects. The Olympic Park is also home to a plethora of festivals throughout the year.

However, one of the most exciting future developments in the pipeline has got to be the ‘Olympicopolis’, inspired by Queen Victoria and Prince Albert, who invested the proceeds of the 1851 Great Exhibition into the development of ‘Albertopolis’, the world-class collection of museums in South Kensington that includes the Natural History Museum, V&A museum, and the Royal Albert Hall. Olympicopolis is a £1.3 billion plan for a cultural and educational complex next to the Olympic Stadium, which will see the construction of several steel and brick buildings joined with riverside terraces and outdoor performance and exhibition spaces. The complex will be home to outposts from the V&A, Sadler’s Wells (complete with choreography school, hip hop academy, and 500-seat theatre), and Washington’s Smithsonian museum, alongside a second campus for UCL and a new home for the London College of Fashion. Where Westfield Stratford was the East’s answer to Shepherd’s Bush, Olympicopolis will be their answer to the West’s museum district or the South’s Southbank Centre. But, with the new complex set in the heart of the Olympic Village and joined by pathways and bridges to the Westfield Centre, there’s always the danger that this will add merely one more facet onto a compound, island metropolis, which will remain as divided from the surrounding community as ever.

If the commercial and economic developments of Stratford City left Stratfordians behind, it might be hoped that culture could find a way not to. However, given the Olympics’ current legacy in the arts, perhaps we shouldn’t be holding our breath. Before 2012, the Olympic Delivery Authority considered demolishing Hackney Wick’s Fish Island, which has the highest density of artists’ studios in Europe, to make way for the Athlete’s Village. Countless artists, writers, and artisans held a three-day festival this weekend to raise support for their own cause. Vittoria Wharf, where they rent live/work space, is facing imminent demolition, courtesy of the London Legacy Development Corporation. They want to build a footpath over the River Lea and into the Olympic Park, and that means the artists have to go. This is in spite of the fact that Hackney Wick was designated as a cultural quarter by the very same organisation in 2013. The Olympic legacy developers have ‘no grasp of community’, say the campaigners, while the leader of the ‘Save Vittoria Wharf’ campaign, Kirsten Allen, said, ‘We believe the value of our community and its creative output unequivocally outweighs that of a superfluous footbridge. Communities and ‘culture factories’ such as ours are constantly being culled, but must be nurtured in order to foster the artists of tomorrow’. 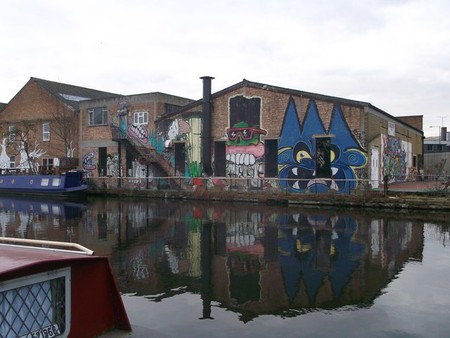 The larger campaign group ‘Save Hackney Wick’ have launched a desperate petition to try and halt their eviction, describing how a steady stream of demolitions over the last few years combined with the London Legacy Development Corporation’s plan to build several unaffordable homes on the opposite side of the River Lea — for which they also need the footbridge — will continue to change the soul of their creative community, forcing them out.

Mayor Robin Wales, when speaking to The Guardian about the Olympic legacy and fiasco such as the one he encountered with the Focus E15 mothers, actually used the Grindelwaldian phrase, ‘for the greater good’. Perhaps, underneath the glitz and glam and green spaces of the new Stratford City, this utilitarian spirit is the real legacy of 2012.