With a stellar cast in a classic sci-fi horror premise, and a plethora fan theories already flooding the Internet, Life has a lot to live up to… and it nails it in exhilarating fashion from start to brutal finish.

A team of scientists on board the International Space Station intercept a probe returning from Mars with the aim of conducting research on something found on the surface. To much fanfare back on Earth, the team discover a single cell organism and give it the name CALVIN.

CALVIN soon becomes powerful enough to escape the confines of quarantine and embarks on a violent rampage throughout the spacecraft, picking off the crew. The survivors are left with the desperate choice of allowing the alien to return to Earth or sacrifice themselves in an attempt to save humanity.

The interstellar single-location concept (director Daniel Espinosa only momentarily allows us off the craft itself), is one that has been played out plenty of times before. From Alien to Gravity, the vast emptiness of space offers its own rules and permutations that give a different take that audiences seem to lap up. It would be easy, as Gravity ended up doing, to rely on this hook to drive the narrative. The Sandra Bullock movie certainly deserved plaudits for its breathtaking visual effects, but on reflection, the episodic nature of the plot was lacking. 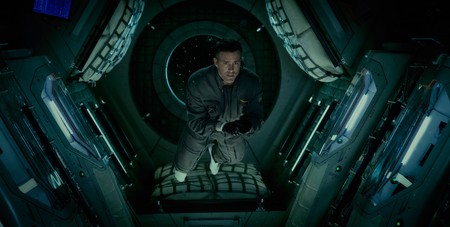 Espinosa, who has previously made thrillers like Safe House (with Denzel Washington and Ryan Reynolds), gets to add a horror element thanks to the alien on board. This idea may not be original, with plenty of references to John Carpenter’s The Thing (especially in a nerve-shredding sequence involving a petri dish), but everything is enhanced with a flourish and panache that elevates what could have otherwise been a predictable genre film.

The setting is a close approximation of the present day, and the characters react in an entirely relatable manner. From bravery to apparent cowardice, nothing is delivered in a hammy way. Reynolds gets to shine early on, and as the film progresses we get to see more from the supporting characters as well standout turns from Ferguson and in particular Gyllenhaal.

For all the fine performances and believable drama, don’t be fooled into thinking this is a ‘safe’ film. The gruesome death scenes may not be played for visceral gore, but they are genuinely affecting. The excellent score catches you off guard regularly, just as it is intended to do. Even the moral dilemma that is at the core of the film is given clever spins setting up a startling finale.

Life may be set up as genre film, but quickly evolves itself into something far more satisfying and ends up being one of the finest sci-fi films of the past decade.

Life is on general release from March 24