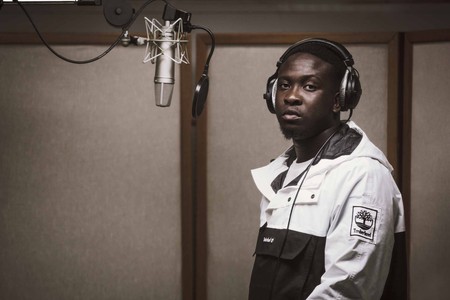 Kojo Funds, the king of Afro Swing, was born and bred in London. He talks to Culture Trip about his favourite haunts in the city, his dream collaboration and why his mum is his biggest inspiration.

Dressed in a bright red tracksuit with several gold chains draped around his neck, Kojo Funds is doing his best to bring the bling even while he’s sitting in a greasy spoon cafe (“I’m here for breakfast all the time!”) in his old hood of Canning Town. He’s just finished up lunch with his boys, plates piled up everywhere, and enjoying a brief interlude of downtime in his hectic schedule.

Now that he’s enjoying the life of an international star playing festivals around the world and hanging out with the likes of Young Thug and Kendrick Lamar, there’s always one thing that brings him back to London. “The food, you know. I swear. I eat a lot of African food. Whenever I’m not here or not in Africa, I miss it. I love my food.”

Despite the swagger and the entourage, the 23-year-old comes across as reserved in person, diligently answering questions yet careful not to reveal too much. He hints at mischief committed when he was younger that could have taken him down a darker path but claims he discovered music just in the nick of time.

Growing up in one of London’s poorest and roughest areas was tough for a “young black kid” being raised by a single mum, he says. “It was a struggle, you get me? Custom House was gritty but fun at the same time. You have your kid things but sometimes you can get misled into the wrong things.”

He started rapping by accident, messing around freestyling at a house party for someone’s birthday. His mates were so impressed they encouraged him to make music. A few days later he was in a friend’s studio laying down a track. When he got a million plays on Soundcloud, he knew he was onto something. 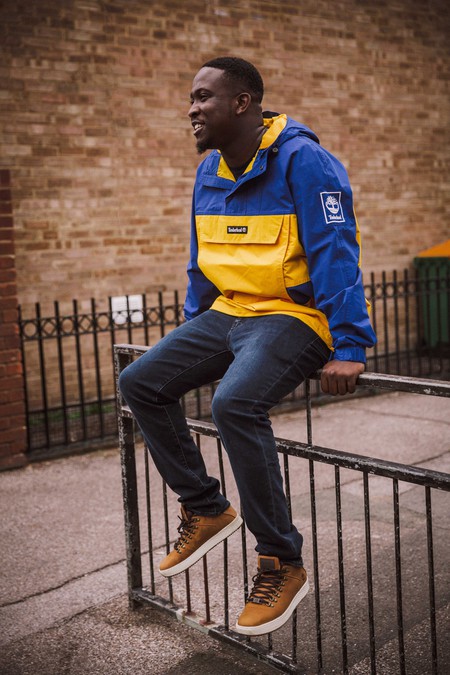 The musician is releasing a mixtape | © Timberland

Funds’ breakout hit was “Dun Talkin’”, a dancehall track featuring Abra Cadabra in 2016, just as UK Afrobeats was really taking off in clubs. But the artist doesn’t just see himself as part of the new wave of artists like J Hus, Afro B and Not3s who are shaping the sound. He considers himself the pioneer of his own genre, one he calls Afro Swing. It’s a raucous blend of African and Caribbean sounds with other genres including rap, dancehall and new jack swing.

Funds credits his parents for opening him up to different types of music from around the world when he was younger. His mum is Ghanian while his father – who was absent for most of his childhood – is Dominican. “I’m getting the best of both worlds,” he says. “I’ve got the African side and the Caribbean side. My dad used to play old school reggae tunes when I was a kid on vinyl. My mum used to play Ghanaian hiplife. It definitely influenced my music a lot.”

Despite his newfound fame, he’s staying true to his roots. He’s still got time to kick it with his old crew, playing football at their favourite spot over in nearby Dagenham. He has his favourite haunts in Canning Town too, which he revisits in a new video for Timberland Cityroam.

The musician also visits his mum often and pays her rent. The only thing he won’t let her do though is go to any of his gigs. “I don’t want people knowing who my mum is and I know she’ll embarrass me.” But for him, she’s one of his main sources of inspiration. “Single parent bringing up her son in a bad environment. It can either go two ways. It can go bad or it can go good. For her, it’s gone good. I appreciate everything she’s done for me. She makes me strive more. I want to be the best for her.”

Funds has kept his star steadily on the rise with collaborations with old childhood friend Yxng Bane (on “Fine Wine”) and up-and-coming R’n’B star Mabel (on “Finders Keepers”). But he cites his surprise cameo during Young Thug’s set at Wireless this summer – to perform “Dun Talkin’” – as one of his most “amazing” career highlights to date. Then there’s the shoutout from one Ed Sheeran, who listed Kojo as one of his favourite new artists during an interview in 2017.

It looks like Funds is happy to return the favour too. Asked who he’d most like to collaborate with, he replied: “Ed Sheeran, man. Yeah. I know it’ll be fun. I like the fact that he’s unique, he’s proper humble as well. Someone with his status you expect them to be out of this world but he’s not, he’s genuinely a cool guy. I respect him a lot. I respect the music he makes.”

The musician is getting ready to release his first mixtape, Golden Boy, a collection of some of his best tunes. He singles out the tracks “Thoughts” and “Thug Ambition” as the most personal songs on the album – ones that chart his desire to leave the hood behind and become a better person. It’s an album that documents his ever growing maturity and agility as an artist.

“It’s very special. It’s my first body of work. It’s going to be unique and cultural. Not to be big-headed but I don’t think anyone can do an Afro Swing body of work apart from me because I introduced it to the scene.”

Outside the cafe and back on the streets, Funds looks out over the River Thames surveying his hometown. He may have wrapped his mixtape but he’s only just getting started.

“There’s a Ghanaian restaurant called Kate’s in Plaistow and a Nigerian one called Tasty in Peckham. Once I’m there, I order jollof rice, plantain, goat meat stew, light soup, fried yam, and omotuo. I’m always at Busaba. My favourite is chilli prawn with jasmine rice, smoked calamari, and chicken satay.”

“When I want to relax I go to Thames Barrier Park in Silvertown. It’s peaceful. There are places where you can just lay down and relax. You can watch the water the River Thames and just chill. One time I was there and I did a verse of one of my songs.”

“You can go for a drink at The Crowne Plaza London bar and just chill. There’s not a lot of people are always there. It’s quiet you and can have your drink in peace.”

“Normally I go clubbing with my boys at Tape London in Mayfair or Libertine by Chinawhite in Fitzrovia. That’s where we hang out. There’s a new place called LA Lounge near West Silvertown. It’s an African club that we go to sometimes. It’s always busy. You catch a vibe there. They play dancehall, hip hop and African music. If you’re looking for an urban night it’s the way to go.”

The cinema is a good place for a first date. You can talk about the film. I like talking when I watch films. Showcase Newham is nice and quiet.

Kojo Funds has collaborated with Timberland to celebrate the launch of their new Cityroam shoes. His Golden Boy mixtape is out via Atlantic Records on 28 September.