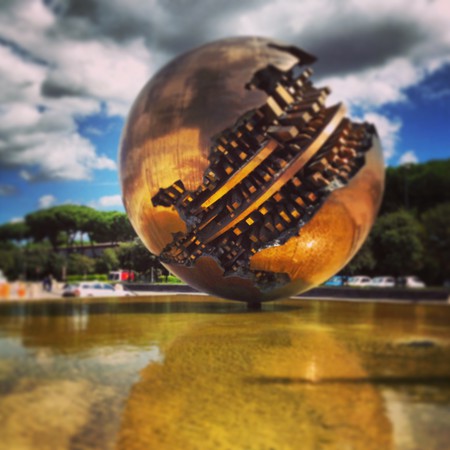 The London art scene is vibrant, with many world-class exhibitions opening throughout the year and one of them definitely won’t escape your notice – Arnaldo Pomodoro‘s show. One of the world’s most renowned Italian sculptors of the 20th and 21st century has finally returned to England after over 50 years. At the Tornabuoni Art Gallery, art lovers will be presented with a historical overview of his works. 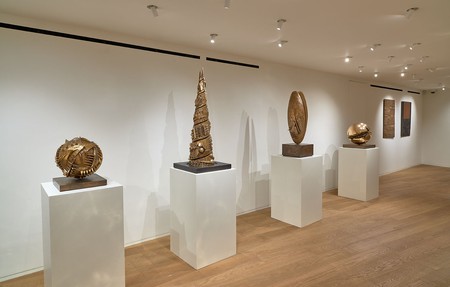 Arnaldo Pomodoro was born on 23 June 1926 in the town of Montefeltro. In 1954 he moved to Milan, where he currently lives. However, after the Second World War he became a consultant for reconstruction of public buildings. He also decided to work on jewellery and everyday objects, which eventually led him to become a sculptor. Pomodoro exhibited in Cologne, Brussels, at Venice Biennale and Montreal Expo. On 9 February 2016 the artist himself visited London to speak to the director of the Royal Academy, Tim Marlow, about his work and the challenges of being a sculptor. One of the most characteristic features of Pomodoro’s sculptures is that they are intended for public spaces. The artist admitted that working on a sculpture ‘in the relation to the architectural context within which it is cited, gives a degree of freedom, something that gives you a great sense of possibility.’ His spatial sculptures are placed all over the world, in various surroundings, including the United Nations Plaza, Vatican Museums and Trinity College in Dublin. 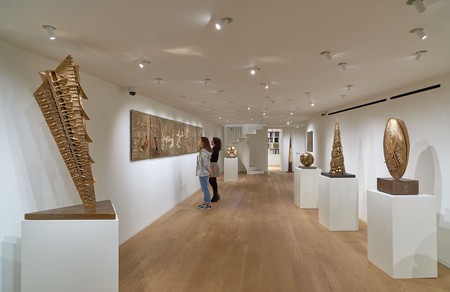 This time, however, his works are presented by Tornabuoni Art in a gallery space. This is your chance to view 35 of his sculptures all in one place – most of them are definitely in a smaller scale than you will be used to, thanks to this unique experience. Works from different periods and series provide you with a good spectrum of Pomodoro’s interests. All of them are made of bronze and designed by Pomodoro himself. At first glance, the sculptures seem shiny and purely geometric. It might seem they are all very similar, but wait until you take a closer look. The works are contradictions themselves. The shiny surface of the spheres and cones is only a cover for a rough and irregular inside. Arnaldo Pomorodo confessed to being inspired by aboriginal art. Many of his works have elements resembling cuneiform, but on the other hand, the artist is also inspired by science and the world of micro elements. The combination of simple, primal geometric forms and the futuristic look of his art reflects the symbolism and dynamics of the ever-changing world. While London remains deprived of Arnaldo Pomodoro’s sculptures, Tornabuoni Art provides an opportunity to become acquainted with them. 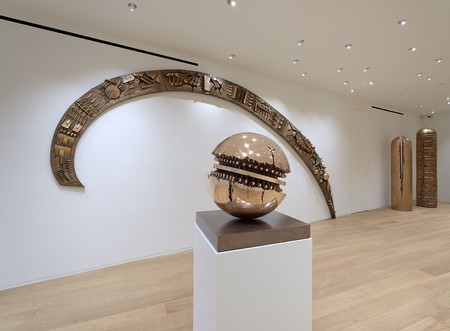 Pomodoro’s works are on display until 16 April 2016 at the Tornabuoni Art London.