Sister Christine Frost is most certainly not your stereotypical nun. Having worked consistently for social justice in the communities of Tower Hamlets and Poplar since the 1980s (where, consequently, she lives), she was awarded an MBE for her voluntary service in 2008. In the following interview Culture Trip helps uncover her life before the convent, her perceived fate of Canary Wharf workers and how she thinks she will be greeted in Heaven. This interview is taken from Thames & Hudson’s London Burning: Portraits From A Creative City, a celebration of Britain’s capital and creative hub. 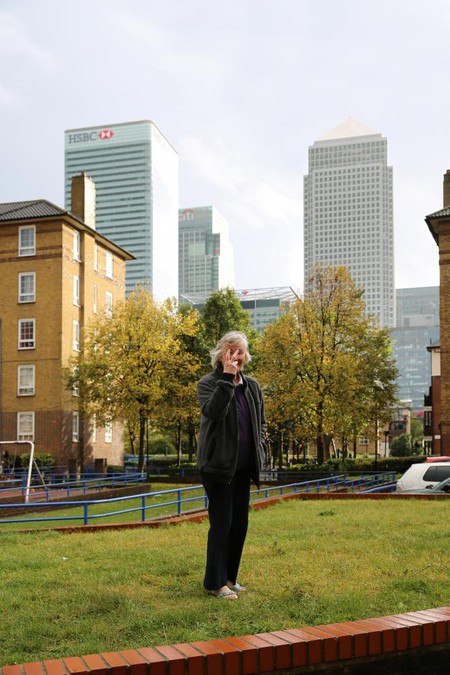 You were born in Ireland, in Limerick, and you trained as a physiotherapist at Guy’s Hospital in London…

I had an interview at Guy’s with a possible place, but I was toying with entering a convent. I know that sounds crazy now, because nobody enters convents; you don’t even use phraseology like that any more. You had to have six pairs of shoes and six of everything to last you more or less the rest of your life, and I was seventeen going on eighteen, and I remember being so ashamed, going into shops looking for six pairs of shoes. I don’t know how a girl would feel today to say to her friends, ‘I’m thinking of being a sister.’ That’s a shame because it’s a fantastic life, actually, if you get your finger on the right pulse, if you get direction, and if you get enough leeway to go where you need to be.

Who was directing you, some force from above?

I suppose you could say God was, in some way. But nature played a part.

So you were seventeen, going to the movies, going to parties …

Of course. I was perfectly normal. I was naughty actually.

Is that the naughtiness that drives you to redemption?

Probably. Probably gives you that bit of mischief. But not maliciousness.

Talking of mischief, you’ve been quite a troublemaker, haven’t you, within the St Matthias community?

Well, on Canary Wharf I remember Eric, what was his name?, he was quite important, he referred to me as ‘that bloody woman’. I’ve been in Poplar for forty-five years; I was sent here by my superiors. I made three vows: obedience, poverty and chastity. When I entered, of course, I was told my superiors knew what God wanted of me. I’ve learned that it isn’t always so.

How would you convert me to your cause? What would attract me to it?

What drives me here is a sense of justice, that’s all. That’s in the Old Testament, it’s in the New Testament, it’s all Jesus ever stood for: being just, being fair, taking care of everybody regardless of who they are. That’s a difficult thing to do ’cause sometimes you don’t like people. You see these people coming along with their clipboards and telling you in their pinstripe suits, ‘Life is going to be so good! You’ll all be employed, you’ll all have double-glazed windows!’ And you think, Okay, that sounds good … I can still see the guy from Canary Wharf sat there in front of us, slouched out, chewing gum, and I’m thinking to myself, There’s no way that guy’s going to do anything for any of us. He doesn’t give a damn about us.

So did you riot and string him up?

No, I think we got Leigh Day, which was a big law firm.

How did you do that? They’re expensive.

We didn’t pay a penny.

Why, did they do the job pro bono?

Who sold the idea to them?

People like me. There would have been maybe half a dozen of us who really, really felt this wasn’t going to be right, ’cause we were all going to end up moved out. Maggie Thatcher talked about the trickle-down effect. There was never any trickle-down. There still isn’t.

So you would build a church spire while Canary Wharf built what, a hundred storeys?

But how many of them will be in Heaven? If they have willingly, wilfully, made loads and loads of money for themselves on the backs of people who are being paid £6 an hour, God will say to them, ‘You were irresponsible! Why did you do that, ’cause that was unjust?’

So do you feel that you have made a contribution that honoured your denial of a personal life in favour of chastity, of poverty, and straightened out some crooked timbers of humanity?

You can only do what you can do; it’s a matter of putting a few little drops into the ocean. It’s got to be about inclusion. I do get scared … I remember reading about Bosnia and Serbia, and I look at my local community and I think, If we’re not careful, if we continue to set one group against another and allow kids to be angry on the street, the neighbours who maybe looked after me yesterday might well turn on me. It’s happening in Syria. To me it’s all about building mutual understanding, mutual co-operation, mutual getting on and doing things together. 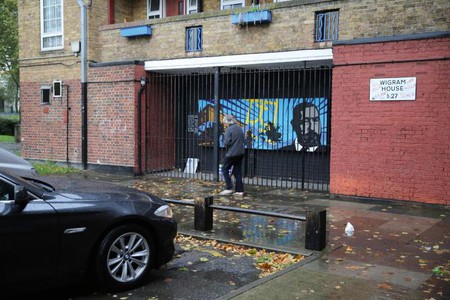 Frost outside Wigram House, part of the Will Crooks Estate where she has spent forty years working. Photograph by Hossein Amirsadeghi | © Transglobe Publishing

Let’s go back forty-five years. What was it like here in Poplar, which communities lived here?

It was English and Caribbean. Brilliant. And the Irish. Forty-five years ago, I would be in a classroom on a Friday in a big mixed comprehensive, and on a Monday I would have new kids in my classroom who’d just landed in England on the Friday to live with some uncle or aunt they’d never met before.

From the Caribbean, mostly from St Lucia or Dominica. We built up tremendous rapport; they’re still my friends. We’d take groups to Margate in the summertime. I’d fill five coaches on Poplar High Street – that’s three hundred people. They’d all have their chicken and their bottles of rum, and they’d be swigging away.

In the intervening years how have the local demographics changed?

The Caribbean community have largely disappeared.

Where have they moved to?

Hackney and further out. Everybody moves out, which is a shame.

And they have been replaced by whom?

I understand that Poplar has the highest population of Muslims in England per capita.

Probably. They come from Sylhet, which was really strange for all of us to grab a hold of. Culture is a very strange thing, because you don’t realise it until somebody maybe is doing something different.

Isn’t the bottom line that someone in the West End of London may have a Bengali cleaner or may visit a kebab house or a curry takeaway, but otherwise they don’t want them around?

That’s what I would challenge around here; I’ve challenged it for years. I was called a ‘Bangalover’, which was meant as an insult, by some of our white community.

Politics apart, is there any resolution to the problem of ethnic strife in cities?

But haven’t recent events proven that the expression of fundamentalism is a sign of anger, or a sign of frustration, like all these kids going out to Syria to fight?

Hold on! We’ve done exactly that! We had the Inquisition, we made people become Christian! So don’t be getting on your high horse!

In the late ’60s, Enoch Powell gave a famous speech, the ‘Rivers of Blood’. Do you remember that?

In a manner of speaking, we have arrived there, haven’t we, at least in some ways?

I would hope that that, please God, will not happen. I see people being angry and being anti- and not trying to understand. That’s why some people haven’t liked me, because I haven’t forgotten where I come from, and I’m thinking, I’m an immigrant as well, and if you don’t like ‘them’ here, I’m going to go too. ‘Oh no, no, we don’t mean you!’ Well then, what do you mean? We had CNN here and they were talking to some of the old ladies here, and as I passed by I could hear them say, ‘Well of course, you know, they don’t integrate, they don’t want to integrate.’ And I knew perfectly well what they were talking about: they were talking about the Bengali community.

But that’s true in some ways, isn’t it? They hardly learn the language, they stick to their own neighbourhood –

Come on! That is a lot of badness because their menfolk had their wives and they were scared stiff that they would go by Western ways, so they kept their wives indoors. That’s why forty- or fifty-year-old women haven’t got a word of English, which I think is an absolute disgrace.

Of course it is!

Gender-benders aside, are you a creative soul as well as a spiritual one?

And your creativity is embodied in your ability to adapt to change?

Yeah. I’m very lucky ’cause I don’t feel tied by rules and regulations and stuff. I hope that when I meet Jesus he says, ‘Hmm, you have tried to follow the Book … Okay, come home.’ That would be the best I could hope for. 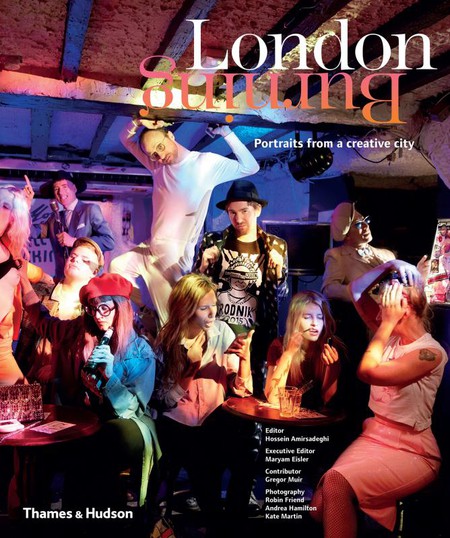 All images are copyright Transglobe Publishing