The roast dinner is one of Britain’s most beloved dishes. London’s only Michelin-star pub spills the gravy on why. Find out the origins of the meal, its connection to royalty and why Yorkshire puddings are a crucial addition. 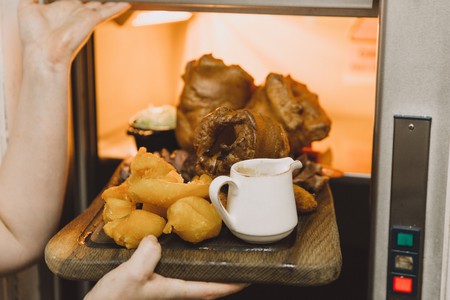 Britons’ love of a roast dinner meat is well known and dates back to the reign of Henry VII, when the Yeomen of the Guard (the king’s personal royal guards) would eat roast beef every Sunday after church, earning them the nickname Beefeaters.

While roast beef was a staple among royalty, the dish’s growth in popularity was helped along by 19th-century chef and author William Kitchener, who published a popular recipe book in 1817 called The Cook’s Oracle, advising that everyone should eat 3kg of meat per week, along with a pint of beer and 2kg of bread every day. People listened, and levels of meat and bread consumption rose. For reference, that’s around eight baguettes every 24 hours – not for the faint-hearted or wheat intolerant. Today, the roast dinner is a regular Sunday fixture in British households. 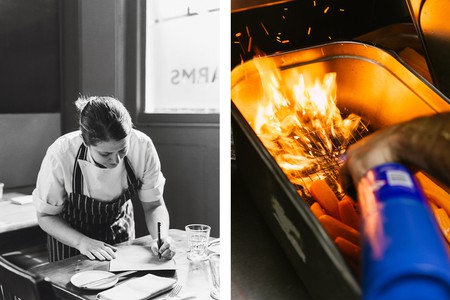 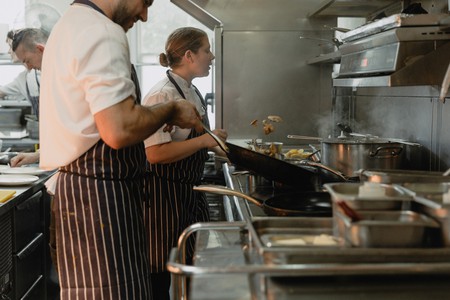 “The Sunday roast is a massive part of tradition in the UK,” says Sally Abé, head chef at the Harwood Arms, London’s only Michelin-star pub. “People have been eating roasts on Sundays for hundreds of years. Traditionally you’ll have a roast joint of meat, which could be beef, chicken, lamb or pork. It always comes with roast potatoes and lots of vegetables. There’s always a big jug of gravy and normally a big Yorkshire pudding as well. 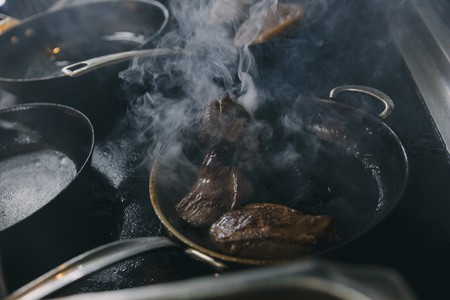 “Our most popular roast is definitely roast beef. People see it as a luxury and an extravagance to save for a Sunday, as it’s something that they might not want to cook at home or be able to afford during the week. We have a history with roast beef in this country, so it’s a nice traditional thing to eat.”

Why is it eaten on Sundays?

From the royal household, the tradition of eating roasted meat on a Sunday spread through the populace, assisted by the traditions of the Roman Catholic and Anglican churches. They dictate that no meat is to be eaten on Fridays and that believers should fast before Sunday services. After eating fish on Friday and not eating at all before church, people were more than ready for a large meal when Sunday service wrapped up. 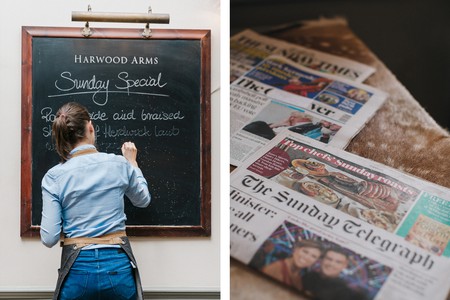 On Sundays, the Harwood Arms offers beef, lamb, chicken and other meats depending on the season | George Hughes / © Culture Trip

It’s believed that the custom spread from Yorkshire, where families would drop off their joints of meat at the local baker’s before heading to church. Many people did not have an oven large enough at home, and as bakeries didn’t make bread on Sundays, the ovens were free and cooler than the usually scorching temperatures required for baking bread. By the time church service ended, the meat was ready to eat and would be carried home. Vegetables and Yorkshire puddings would often be cooked in the same pan as the meat, to pad out the meal. It was also important that the joint stretch to another two or three meals through the rest of the week in the form of pies, hash or bubble and squeak. 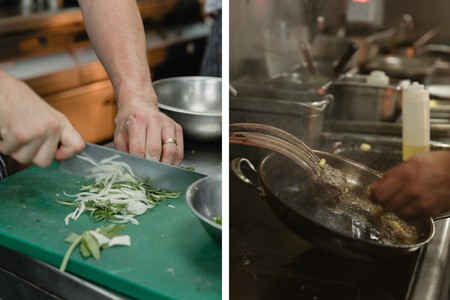 Crucial elements of a roast dinner

Everyone’s mother cooks the best version of this meal, and what’s on the plate will change depending on preference, dietary choices and seasonality. But the crucial elements are meat (or a vegetarian alternative such as nut roast or plant-based protein), roast potatoes, vegetables and gravy. Beef, lamb, chicken and pork are the most widely used, with specialised accompaniments for each. It would be heinous to serve horseradish sauce with chicken, for example, but unthinkable to have beef without it. Yorkshire puddings, the addition of which is one of the best ways to double-carb, are traditionally served only with beef, but in reality no one will bat an eyelid if you have one with your lamb and mint sauce. 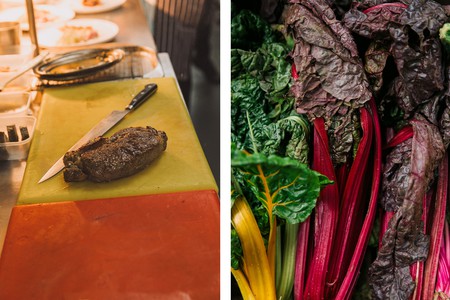 Vegetable accompaniments are a must | George Hughes / © Culture Trip

Common vegetables include carrots, parsnips, swede and green beans – but really anything goes. Gravy is a must, however. The potato, now an essential element of the Sunday roast, wasn’t widely eaten in the UK until the late 1700s. Despite arriving in Europe via the Spanish when they conquered Peru in 1536, in England the humble spud was regarded with suspicion and distaste. Only when it was realised that potatoes could help with food shortages did the Board of Agriculture launch a campaign in 1795 extolling their benefits, and they soon became the staple ingredient we know today. 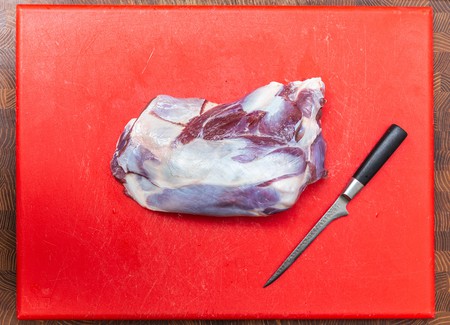 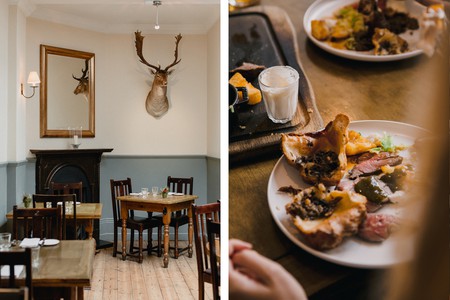 The best Sunday roast in London?

“What makes our roast so special is the attention to detail in every single element,” says Abé. “From the four-to-five-day-aged sirloin of beef that we use to the Yorkshire puddings that are stuffed with braised beef and bone marrow, to the bone-marrow gravy. You’ve got some beef-fat-roasted potatoes on there, and then glazed parsnips and carrots. Everything is … freshly seasoned and has big, big flavours. And it’s a great-sized portion as well. 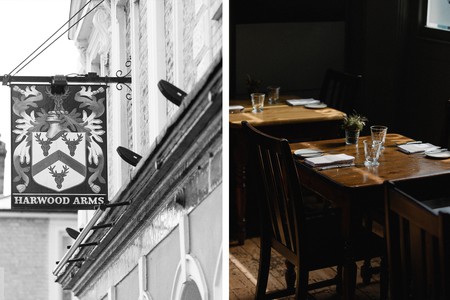 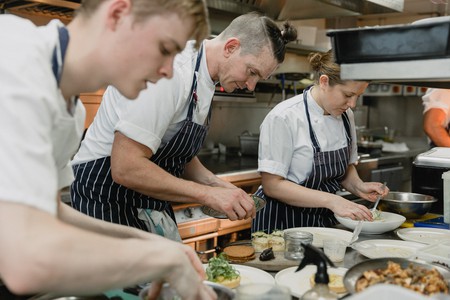 “One of the things we do slightly differently here at the Harwood Arms is actually serve the roast on big sharing boards for two people to share. We want it to be a family meal and have everyone around to enjoy it.” This tradition is continued even by those who cook the meal for others, Abé says. When the pub is very busy, “the whole team pulls together and does their job, and everybody’s sort of on fire and moving and flowing together as one, and it’s really nice to work like that.” 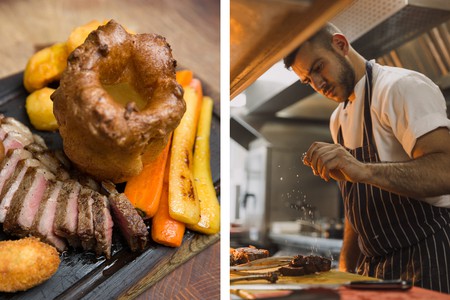 While meat supplies are more readily available now than they were during the 18th century, the roast dinner remains a welcome Sunday treat. Although plant-based diets and a growing interest in more global cuisines might have caused its popularity to slide, the frequently fully booked Harwood Arms shows that it’s still going strong. As Heston Blumenthal, owner of the Fat Duck at Bray, says: “The world would be a far worse place if the tradition of Sunday lunch were to disappear.”