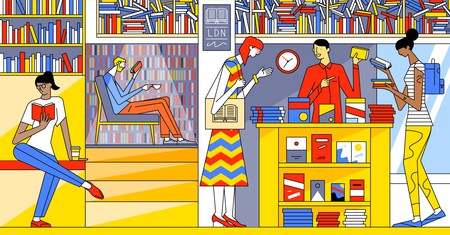 In 2017, the number of independent bookshops in the UK and Ireland grew after 20 years of decline, by one. Far from insignificant, this has emboldened a sector bruised by megacorporations and changing reading habits. By focussing on curation and events, London’s smaller players are making their presence felt again on the city’s literary scene.

To step into Libreria is to step into the fantastical library in Jorge Luis Borges’s short story ‘The Library of Babel’. The mirrors on the bookshop’s back wall and ceiling reflect row upon row of bookshelves, a seemingly infinite number of books.

“We wanted to try to reimagine what a bookshop might be in an age of unrelenting digital interference, and to introduce younger generations to the beauty of the tradition,” says Libreria’s manager, Paddy Butler. With its soft yellow glow and smooth wooden shelving, the space feels closer to a scene from Midnight in Paris (2011) than a bookshop on a busy street in Spitalfields. It is a place of immediate warmth and slow escape, a snug hideaway a million miles away from the Waterstones megastore down the road in Aldgate.

Butler is a pioneer of curation; he organises his books by theme instead of genre, providing a more creative browsing experience. “On our Bad Feminist shelf, you might gravitate towards a novel by Angela Carter and discover Helen Castor’s biographical study of Joan of Arc, or [find] architect Richard Rogers beside Jean-Jacques Rousseau on our Utopia shelf,” he explains. More than an organisational quirk, it is a thoughtful way of building knowledge and context around books.

This personalised approach is driving people towards independent bookshops, says Eleanor Lowenthal, the founder of Pages of Hackney, another of East London’s thriving independent bookshops. Caravansérail close to Brick Lane and Phlox Books in Leyton are two more names to note; bookshops where you can find art exhibitions and freshly pulled pints, respectively.

Recent figures from the Bookseller Association support Lowenthal’s hypothesis. In 2017, it reported that the number of independent bookshops in the UK and Ireland had increased, rather than shrunk, for the first time since 1995. Although the increase is small – a difference of one on the year before – it suggests the fortunes of long-suffering bookshops are finally changing. Lowenthal believes the rise is due in part to people wanting “an experience” when they buy, or even just browse for, books.

Unlike big chains, which have traditionally sold shelf space to publishers, independent bookshops such as Pages of Hackney hand-pick their selections, and increasingly discerning customers appreciate this personal touch. It appeals to people, mostly living within walking distance, who want to (or perhaps want to be seen to) champion the caring artisan, not the profit-chasing conglomerate. “Some of them are coming in and specifically saying, ‘I never buy from Amazon and I want to support you,’” says Lowenthal.

Pages of Hackney has flourished against the odds. With no previous experience in publishing, and at the height of the financial crisis, Lowenthal launched her bookshop on a stretch of road known for its high murder rate rather than its literary bent. It’s an unlikely recipe for success but, since opening in 2008, footfall has increased year on year. By working with the Hackney society and other local initiatives, Lowenthal’s store has also emerged as a place of social significance, hosting book launches, poetry readings and political discussions, on subjects such as the cultural legacy of the Windrush generation.

Appealing to the community is not only increasing numbers but challenging stereotypes. The notion that bookshops are frequented exclusively by middle-class white women is slowly fading as independent bookstores become more inclusive. Lowenthal says there has been a major demographic shift in her customer base, including more ethnic diversity, a change she believes has been brought about by the books she stocks. If Lowenthal is right, the numerous initiatives set up to support under-represented writers, such as the Guardian 4th Estate BAME short story prize and Penguin’s WriteNow scheme, appear to be giving a platform to previously neglected voices at the same time as supporting independent bookshops.

With guests such as poet Yrsa Daley Ward and Golchehr Hamidi-Manesh, who runs the Pride of Arabia book club, as well as regular panel discussions on LGBTQ issues, Libreria’s rising popularity also rests on its ability to remain relevant to East London’s mix of inhabitants. According to Butler, where independent bookshops have excelled is in realising “there are many communities that no longer wish to be silenced.”

While independent bookstores have been revitalised, the prospects for London’s second-hand bookshops, many of which are located around the suitably Dickensian Cecil Court in the West End, look less promising.

“There are no second-hand bookshops; they’ve gone. It’s the same all over the world,” says Peter Ellis, owner of a rare-book store in Cecil Court that bears his name. Since the dawn of the internet, specialised booksellers have had to adapt to changing methods of consumerism. “If I had a bookshop without catalogues and without the internet, I could not survive,” Ellis says. “I couldn’t survive on people just coming through the door, and that’s been the case for 20 years.”

Bookstores, in general, saw a seismic dip in sales with the arrival of Amazon in 1994, leading many to go out of business. Now, independent bookshops appear to be offering a climate of comfort, curation and community that specialist bookshops are struggling to cultivate.

As the rare-book business increasingly relies on the fast methods of e-commerce to survive, the new-book trade is enjoying the luxury of slow consumption, of old-fashioned brick-and-mortar shops. Though Cecil Court remains a hotspot for tourists, these interactions rarely convert into sales.“I do get lots of passers-by but they’re not the ones that buy the books – I don’t encourage footfall,” says Ellis.

The influence of independent bookshops can also be seen in how mainstream sellers have attempted to appear more independent, a trend that cuts across many industries. Before James Daunt took over Waterstones in 2011, the company hadn’t made a profit in three years. Fast forward to 2017 and the UK’s biggest chain of bookshops enjoyed an 80 percent increase in annual profits. The reason for its success? Borrowing ideas from independent retailers.

“I feel like when Waterstones became less chain-y, the customers responded,” says Lowenthal. Seeing the consumer demand for more curated environments, Daunt set about doing two key things: opening unbranded stores in towns across the UK and giving local branches more responsibility to select their own displays. In other words, Waterstones became more like an indie.

Independent booksellers influencing London’s book culture is an exciting prospect. Shops curating unique collections will expose audiences to a greater variety of titles. “We’ve all got such different books that work for us, such different feels and focuses and ideas and that’s really our strength,” says Lowenthal.

This diversity breeds interesting conversations, understanding and empathy. It widens our field of knowledge. In the words of Japanese writer Haruki Murakami: “If you only read the books that everyone else is reading, you can only think what everyone else is thinking.”