Here's Why London's First Vegan Pub, the Spread Eagle, Is a Huge Deal 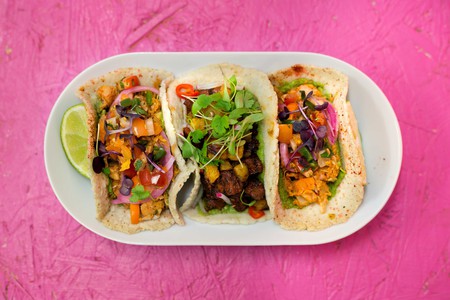 Tacos at The Spread Eagle | Courtesy of Fraser Communications

London’s vegan scene is growing every day, with more and more restaurants offering vegan-friendly menus and options. However, the opening of the Spread Eagle in East London’s Homerton marks a significant turning point for Londoners. The pub boasts a 100% vegan menu (the first of its kind in the city), and it doesn’t stop there; everything in the venue is 100% vegan too – including the bar stalls.

The owner of London’s newest vegan hotspot is Meriel Armitage, who is also the founder of the legendary Club Mexicana, a vegan street food taco joint that has taken the city by storm.

Merial, alongside business partner Luke McLaughlin, are making it their mission to debunk the stigma that veganism is drab. Instead, they intend to fuel London’s vegan revolution by offering punters a mouth-watering menu they simply cannot refuse, whether they’re vegan or not. 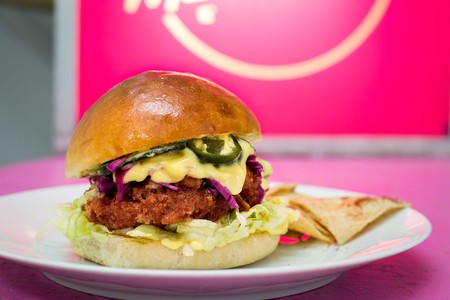 Chicken Torta at The Spread Eagle | Courtesy of Fraser Communications

In a city that’s more health-conscious than ever, the Spread Eagle’s plant-based menu takes traditionally meaty dishes and transforms them into a creative vegan option. The Mexican-inspired menu includes the likes of jackfruit tacos and ‘tofish’ burritos, vegan fish and chips and mushroom ‘scallops’, all of which will leave you feeling both physically satisfied from the food and morally satisfied that your dinner has been made cruelty-free.

Meriel says: ‘Being vegan is not just about the food, it’s what you’re drinking, what you’re sitting on, what you’re wearing, but that doesn’t mean it has to be dull, or take itself too seriously either. It can be fun, flavoursome, and look great too. Our mantra is ‘no chickpeas and chia seeds’, thats why we’ve got dishes on the menu that look like the best Mexican fried chicken burger ever, and jackfruit carnitas, which look like pulled pork. When people order these dishes and find out it’s vegan, it blows their minds, and we love that!’ 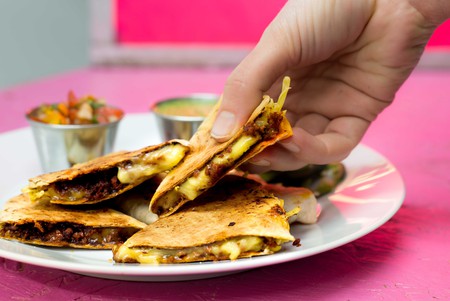 Quesadillas at The Spread Eagle | Courtesy of Fraser Communications

The newcomer to the London foodie scene also offers vegan beer and cocktails, which are made without the use of any animal by-products. Armitage and McLaughlin have been working with East London breweries, such as Beavertown, to create beers that have been made without animal-based products.

Last year, veganism took off in London, and restaurants and supermarkets responded to this priority by upping their vegan offerings to guests. However, the Spread Eagle marks a new chapter for food culture in the city, with an entire menu dedicated to veganism, rather than it being an afterthought or an addition to the regular menu.

The innovative new pub is located on Homerton High Street in the buzzing East London borough of Hackney. Whether you’re a vegan or not, don’t miss this great new spot.