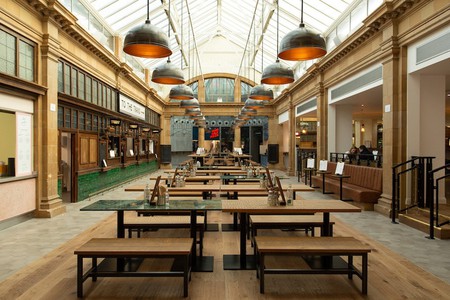 On a green marble countertop, flawless-looking plates of food jostle to get close to the camera. Thai glass noodle salad, perfectly charred sourdough pizza and beetroot lattes compete for attention. Serious, bespectacled men debate the hoppiness of two craft beers brewed in Sussex, and a mother gives her buggy-ensnared child a lick of soft-serve charcoal coconut milk ice cream. The future of the British street food scene is here.

Market Hall Fulham is a ‘community hub’, a modern-day food hall with a communal dining and drinking area seating 180 that brings a variety of street food traders together under one Victorian ticket hall roof. It serves expertly cooked, trend-conscious food that’s good for your body, your cravings and your social media feed, from well-known London food vendors such as Butchies, Ahi Poké and Yard Sale Pizza. It describes itself as a collective harnessing the talent of the British food scene and supporting them so they can find new customers – but does this come with the growing creep of homogeneity and blandness?

Street food is incredibly popular. A 2014 report showed that 50% of consumers buy street food at least once a week, and 47% of people said they planned to keep increasing the amount of street food they ate over the next year. Steve Kent, marketing and business development director for Santa Maria Foodservice, the company that carried out the report, said: ‘Our research shows that consumers aren’t necessarily seeing street food as a replacement for a sandwich or wrap but as restaurant quality outside the restaurant. Consumers are clearly attaching an added value to street food.’ 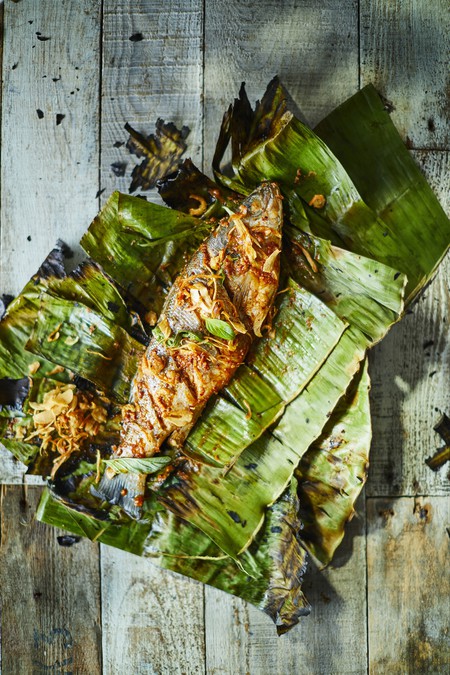 The seabass served at Thima and Farang | © Market Halls Fulham

Organisations such as Market Halls are capitalising on this increased desire for trendy, tasty food to open businesses dedicated to giving the hungry public an easy way to eat fare that feels fresh and on trend, even if you’re not standing on the street to eat it.

The origins of street food (or this wave, anyway; in Roman London, street hawkers sold British oysters for punters to eat, so it’s hardly a new concept) lie in creativity and disorganisation. MEATLiquor started in a Peckham car park in 2009 and now has 11 permanent locations. Back when it was just a van named MEATWagon, the founders would tweet the location and hungry customers would turn up, desperate for the chance to be a part of this new, exciting way to fill your stomach. It was countercultural and different, and the often unlikely locations and prices lower than restaurants seemed revolutionary. The diffident nature of the food and the service itself – MEATWagon frequently ran out of menu items and was known for its slow service – only added to the grimy glamour of trying something before any of your friends had.

The popularity of street food contributed to its now-ubiquitousness. The very name now implies gentrification and quality; you’d never catch a London hot chestnut seller calling their wares street food. A growing public awareness, rising rents and an incredible amount of competition (there are around 2,000 street vendors trading across the UK) means street food isn’t the cutting edge business it was a few years ago. An industry has sprung up to support the vendors, with organised markets taking a cut of the traders’ profits in return for greater financial security, a near-guaranteed footfall and developmental support. Market Halls is one example; Kitchenette is another, helping vendors by loaning them stalls and advising on health and safety requirements in return for a slice of the profits. London-based Kerb is a third, providing a recognisable name and six markets across London which promises quality food to the consumer in return for 15% of traders’ takings. As long as vendors can afford to pay, tiny new businesses are given the same platform as bigger, more established brands. 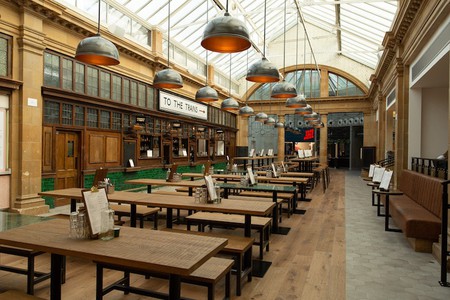 Has this organisation and development of street food taken it away from the street, homogenising each stall into a neatly packaged shop? Certainly if you walk into Market Hall Fulham you’re struck by its tidiness and its look of clean, organised space. While the vendors are clearly different, they’re set up side-by-side on the same tiled floor. There’s no eating kerbside here, or even under an open sky; instead you can expect to perch under a restored glass on a shiny wooden bench, eating with metal cutlery off a china plate.

Culture Trip spoke to Simon Anderson, the chief operating officer of Market Halls and one of the founders of cult barbeque restaurant Pitt Cue, who explained the inspiration behind the business and what made him decide to help create it. He said: ‘Our CEO Andy Lewis-Pratt, a former property investor, was inspired by food markets around the world. Hawker markets in Asia, the Dekalb Market Hall in New York and La Boqueria in Barcelona mean locals can head to a safe, covered space and enjoy delicious food. Why can’t London enjoy that luxury? People are more educated and when they want to eat out they want more choice. We work with brands who fizz with independence and passion so we can bring their energy to Londoners.’

The 49-year-old continued: ‘We’re directly combating the death of corporate dining. The reason that so many restaurant chains are struggling and closing at the moment is that they don’t have as much soul as we have. We’ve found restaurants and traders who wouldn’t otherwise have been able to trade and pay overheads in a location they would never have been able to afford. This way, we deal with the business side of things and they just get to focus on food.’ 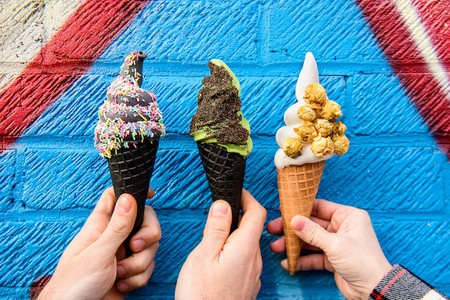 And as for fighting the homogeneity? ‘We’ve tried to differentiate between the different offerings. We want the traders to retain their autonomy, and not succumb to the homogeneous look. We want their personalities and identities to shine. People eat with their eyes, after all. It’s important that each stall looks good and stands out from the crowd.’

Anderson’s also quick to point out that Market Halls is bringing Fulham locals the kind of food that it might not otherwise have seen, thanks to a lack of awareness about the location. ‘Fulham isn’t as developed as East London, so there’s not as much competition,’ he said. ‘We’re bringing brands that would never have come here to a new audience. Everyone is fighting to open in the East End, and in West London there’s a more affluent audience waiting and wanting something exciting. The traders were keen to come down here and utilise that.’

Seb Holmes, who was sous chef at the Begging Bowl and head chef at Smoking Goat before founding Thai restaurant Farang, agrees. ‘I’d never have come to Fulham because it’s unknown territory, so I’ve really appreciated the structure and comfort of Market Hall.’

Farang has brought its most popular dishes to the location, so while it isn’t uniquely buzzy street food, it is increasing the audience who’ll get to eat his wild seabass curry. 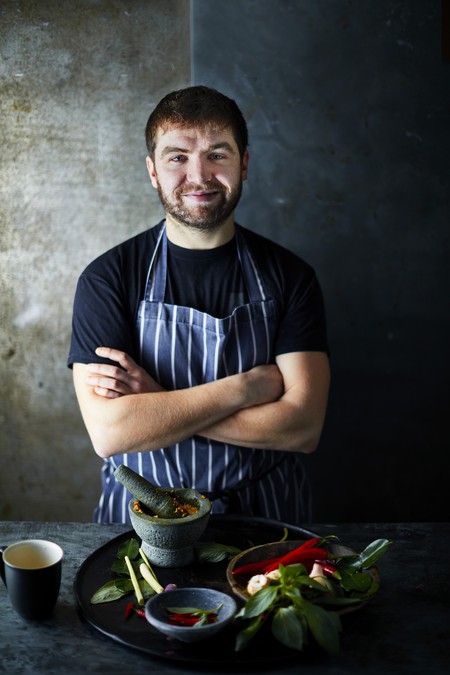 ‘People here seem really nice so far – and they’re happy to spend money on good food,’ Holmes said. ‘We fly ingredients out of Thailand three times a week, which isn’t cheap, so people have to be happy spending money on what they’re going to eat. So far, Fulham customers seem to be removed from Shoreditch, where a lot of people just want a £6 fried chicken burger. Our customers have to be willing to recognise the quality of the ingredients and spend money on it.’

So while the food served at Market Hall Fulham might not be at the cutting edge of innovation or mega affordable – that seabass isn’t cheap, after all – it is bringing good food to the people. This is something Asma Khan, founder and owner of Soho’s Darjeeling Express, feels passionately about. She’s brought her all-female kitchen and stunning Indian cooking to Fulham, an area she knows well.

‘I’ve lived in this area for 20 years, although I grew up in Calcutta. I’ve spent years walking past the building Market Hall is in, but it was always closed and I was desperate to see inside it.’

It was the communal, egalitarian nature of Market Halls that persuaded her into opening there. ‘The communal dining appealed to me,’ she said. ‘Everyone can come here and you don’t have to be cool to know about it, because it’s right here in a building for everyone to find. There’s space for families, it’s casual and laid back. Food is meant to be eaten is this kind of environment. Communal eating nourishes the soul.’ 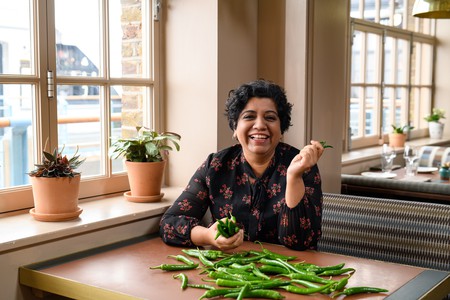 She continues: ‘Food is a great social leveller. In India, the caste system still plays a huge role in where and what you can eat. In Market Hall, everyone can eat together, side by side, and I have the privilege of cooking for them and seeing their hearts smile.’

While Market Hall and British street food in general might be more homogeneous than it once was, it’s undeniable that it’s still growing and moving forwards, reaching and feeding people who might otherwise never had the impetus to try authentic poke. Perhaps if the street food expansion continues and London ends up with 30 food halls (as many New York has) we’ll start running into the problem of being faced with stall after similar stall of bland, repeated food. But for now, the chance to see people of all ages and backgrounds enjoying that glass noodle salad together is too inspiring to be disappointing.