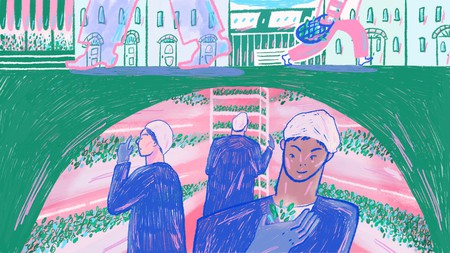 Below ground in South London, a hydroponic city farm in a tunnel could hold the secret to the future of food production – on earth and in space.

On the surface, Clapham High Street looks like any other street in London, with its coffee shops, bars, restaurants, supermarket and library. But underneath it hides a subterranean gem: 33 metres (108 feet) below the ground, a city farm is growing sustainable microgreens lit by pink LED-lights in tunnels once used as air raid-shelters.

The farm, Growing Underground [GU], was started by two friends, Richard Ballard and Steven Dring, in 2012. Ballard had moved to London to do a film degree and came across the Clapham tunnels when watching a film about hidden London. Both Ballard and Dring, who have known one another since secondary school, wanted to work in sustainability, and so the idea for GU took root. Since its inception, the sustainable farm has kept growing and GU’s microgreens (which come in a number of varieties, including Italian salad and Asian salad) are now sold in Waitrose, Ocado and Whole Foods, among others. 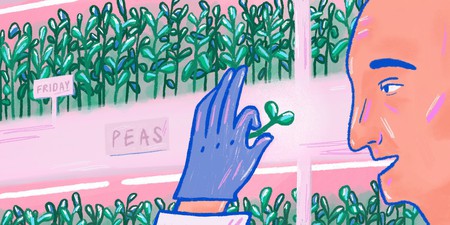 In the warm, protective climate of the old air-raid shelter, the microgreens shoot up from seeds | © Sol Jeong / Culture Trip

Helping the environment through hydroponics

Visiting GU feels both mildly psychedelic and oddly familiar to anyone who’s watched sci-fi movies where a new civilisation is set up in space. You step into a small, cage-like lift, and descend into the warm, damp climate of the tunnel, where the microgreens sprout in their plant beds. The farm currently uses about 530 square metres (4,705 square feet) of the tunnel, but aims to expand into 3,500 square metres (37,674 square feet) of growing space in the future, as the urban environment has plenty of positive aspects.

“The idea was to tackle climate change. Agriculture is a massive contributor towards that; 30 percent of all emissions come from agriculture in some way. We looked at the site and we thought of using redundant urban space, so that we don’t have to build any more,” Ballard explains. “The urban space is a controlled environment and stays at a consistent temperature, which is easy to work within and very efficient.”

GU uses less water than regular farms, and it doesn’t have to use pesticides, since there is no contamination from the outside world. Growing the food close to the point of consumption also gets the salads to the customers quickly. This cuts down on food miles as well as food waste, as the products have a longer shelf life. The microgreens are grown hydroponically, using trays lined with damp, recycled carpet that keeps the water in. “We sprinkle the seeds on, pop them onto the shelves, wrap them up and put them into the propagation area where it’s dark and slightly warmer – we recreate the environment of soil,” Ballard says. Not using any soil also means that GU isn’t contributing to global soil degradation.

The hydroponic farm welcomes visitors on Thursdays and Saturdays, and does private tours for companies, universities and other interested parties. It is working with scientists from the University of Cambridge and the Alan Turing Institute to collect data, which has led to some unexpected findings – like how much visits to the site help growth: “When you have a lot of people going through, the CO2 really helps. The guys who do our monitoring at Cambridge said to us: ‘Oh, did you do a big tour on 24 June?’ And we’d say yes, how did you know that? And they’ll say, ‘There was just loads more CO2 in the environment,” says Ballard. 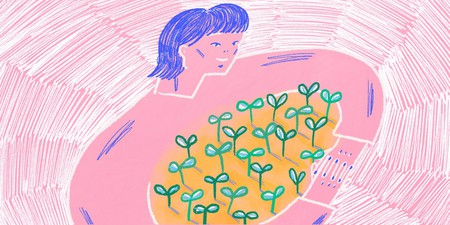 The future of agriculture

Hydroponic crops like those produced by GU could well be the future of farming, especially in regions with low levels of fresh water resources, according to the United Nations’ Food and Agriculture Organization. The Design Museum agrees, and has included the urban farm in its exhibition Moving to Mars. “It is generally thought that any future Mars missions would rely on hydroponics for food production, as the Martian surface isn’t suitable for growing and there is little access to water. Hydroponic systems offer the most efficient way of growing crops,” says curator Eleanor Watson. She believes this kind of vegetable growing is the future of food production. “Nobody can say for sure whether we will actually end up going to Mars, but there is a lot to be learnt by trying to get there that could help us to live better here on Earth.”

You get more yield per square metre when you grow crops in controlled environments like the farm, and Ballard and Dring hope to eventually expand the concept to other sites. “Underground works really well for us, and redundant space is something we really want to work towards, but we may end up doing things in a warehouse on the back of a distribution centre, for supermarkets directly,” Ballard says.

While life on Mars might still be some way off, our climate can’t sustain the kind of intense factory farming that’s previously been used. For anyone interested in a viable alternative, Growing Underground offers a fascinating insight into what that could be, and shows that the future might not be in the stars, but the ground.