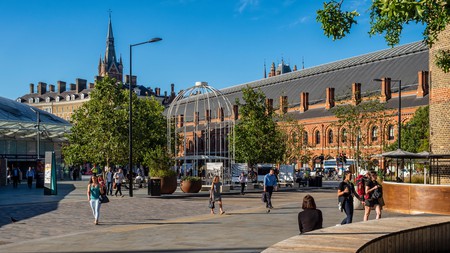 King’s Cross is the gateway into London for many visitors, but, whether you’re passing through or a permanent resident, there are plenty of good reasons to stick around for a while before heading deeper into the city. A massive urban regeneration project in the early 2000s blossomed into one of the city’s greatest modern success stories, and, now, King’s Cross boasts some of the best shops, bars, restaurants and cafes in London. Here are some of the best places to stop for a coffee and drink it all in. 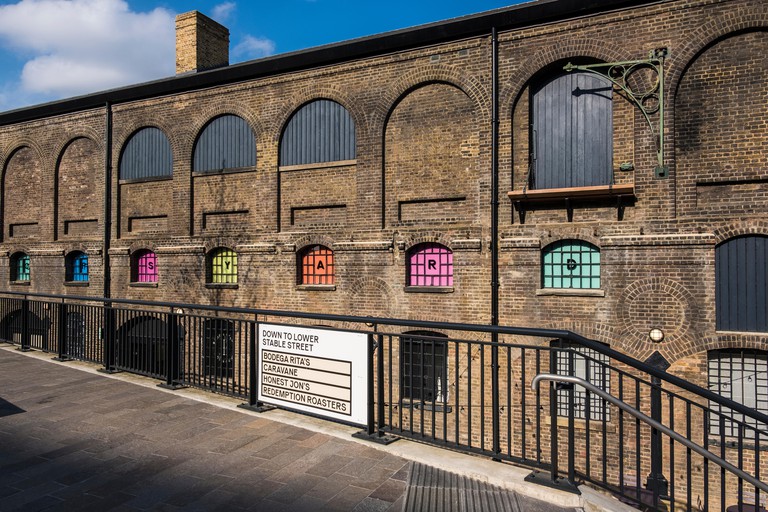 Coal Drops Yard is kind of the epicentre of urban regeneration in King’s Cross, a shopping centre and food court built on the grounds of a set of coal drops – sites where locomotives would refill coal. There are plenty of great places to stop for a bite and a coffee, but Redemption Roasters is especially interesting.

All the coffee you’ll find here is made from beans from a roastery at Aylesbury Prison, part of a scheme designed to give inmates the chance to learn a trade they can ply when they’re released. Young offenders are also trained as baristas. As if that wasn’t enough, the coffee is also available to purchase wholesale, in case one cup simply won’t cut it. 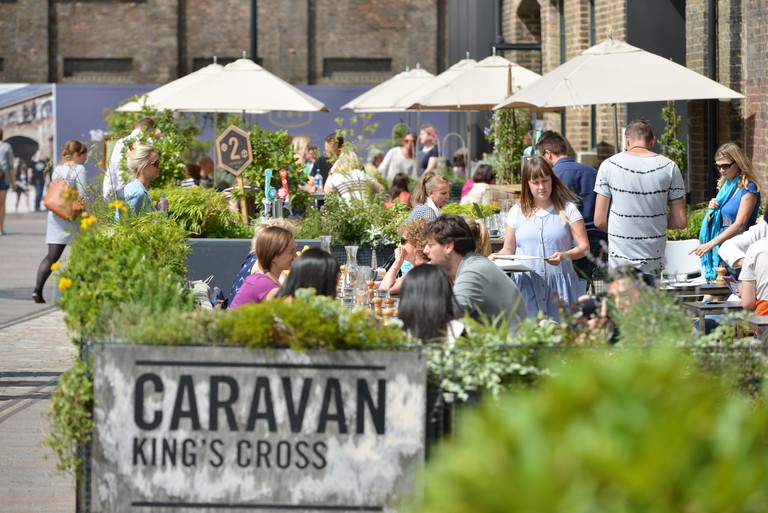 © Peter Cripps / Alamy Stock Photo
Another Coal Drops Yard player, Caravan is easily spotted on a sunny day, as their sizeable outdoor seating area is usually well populated. Caravan is as much a restaurant and bar as it is a cafe. Given that it’s built from an old warehouse, it’s definitely the largest coffee spot on this list, and the scale of the interior is matched by the number of options.

Caravan have had their own signature blend for the past decade and offer it in a variety of different styles, from straight espresso to turmeric lattes. If you’re peckish, the breakfast and brunch menus are both unique and interesting; highlights include fried jalapeño cornbread and chorizo and potato hash.

Stepping out of St Pancras Station and into this place, you could be forgiven for thinking you were on the other side of the Eurotunnel. Founded by the same Alain Ducasse (there can’t be many others) that founded a three-Michelin-star restaurant at the Dorchester Hotel, this coffee spot isn’t exactly cheap – the most expensive drink on the menu is £15 – but certainly worth a visit if you can spare the coin.

All the coffee is either single-origin or a unique blend that can’t be found anywhere that doesn’t bear the Ducasse name, as it is all roasted at his HQ in Paris. Each offering comes with its own backstory on the menu, and advice on which sweet treats to pair them with is also readily available.

If you’re just exiting the station and don’t feel like walking much further, Notes is an ideal stop to put the spring back in your step. One of several spots dotted around the city, it’s truly a homegrown experience, with the single-origin coffee on offer being roasted just a few miles (kilometres) away in East London.

If things are a little darker and you’re in the market for something a little bit more intoxicating, Notes also offers signature cocktails and craft beers. On Wednesdays, they even host a weekly jazz night with players from the local area.

Yet another taste of France on the other side of the Channel, Aux Pains de Papy is, as the name suggests, more focused on pastries than coffee, although, rest assured, it has plenty of that as well. It was founded when Mathieu Esposito, heir to a baking legacy in the South of France stretching seven decades, moved to Notting Hill and decided that London needed a taste of his family’s handiwork.

Aux Pains de Papy was, thus, opened in 2013 and has since won numerous awards for serving the best French pastries in London. Yes, the best. Pair that up with a traditional Parisian coffee and you’d be forgiven for walking out speaking French instead of English. Or at least trying to.

Cafe, Italian, British, Vegetarian, Vegan, Gluten-free, $$$
Facebook
Email
Twitter
Pinterest
Copy link
Share
Map View
Half Cup is one of those places which just exudes trendy, from the hand-painted murals and the climbing plants to the turquoise chairs. This place is far from being all style and no substance though: the coffee comes from Nude Coffee Roasters in Spitalfields, a roastery that has raked in numerous awards since migrating over from New Zealand.

In true London style, Half Cup also offers a rotating menu of guest blends and single origins, so you can keep going back and always get a different experience. Add to this an extensive range of breakfast and brunch options, and you’re onto a clear winner.
Give us feedback