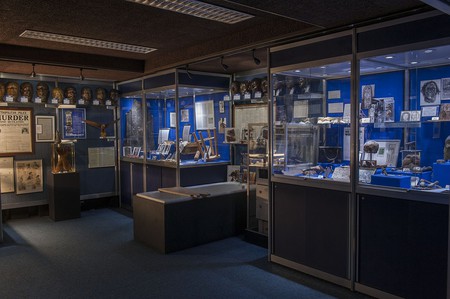 While Netflix fans have been eagerly anticipating the latest series of Charlie Brooker’s hit futuristic show Black Mirror, few are aware that the sixth episode in the latest season reflects a real-life collection of artifacts in London’s Westminster.

Anyone familiar with the series knows that Brooker’s Black Mirror episodes are based on a perception of how society could evolve with different technology and social media. The chilling episode titled ‘Black Museum’ depicts a collection of memorabilia that was previously involved in crimes – many of which have featured in past episodes Black Mirror.

Interestingly, few viewers know that Scotland Yard has its very own crime museum in London (formerly known as the ‘Black Museum’) which showcases a collection of private police memorabilia from crimes across the decades. Originally opened as an educational tool for UK police officers, this real-life crime museum opened to the public at the Museum of London for the first time ever in October 2015 and ran until April 2016. It unveiled weapons used by notorious London criminals such as the Kray twins and Jack the Ripper.

Sadly for history buffs, this was the first and last time the exhibition and its artifacts would be accessible to view by the public. The museum now exists in Room 101 at New Scotland Yard Headquarters in Westminster and consists of two separate sections – a replica of the original museum, and a newer part exhibiting 20th-century crimes.

The historic collection features over 600 incredible objects, including the hangman’s noose from Britain’s last ever execution, as well as a poisoned syringe used by the Kray twins. Likewise, drugs, body parts, mugshots, weapons and death masks all form a part of this unique historical exhibit.

Spookily, there was no official opening date of the museum, and more than two years went by before the first visitors were recorded visiting the collection.

While the historic memorabilia cannot be viewed by the public anymore, any UK police officer can pay visit to the collection with a prior appointment – but due to its popularity, it can sometimes be rather challenging to secure a visit.