For Its 500th Anniversary, the Royal College of Physicians Re-Examines Its History

To commemorate the institution’s 500th anniversary, the Royal College of Physicians has gotten its hands dirty, dissecting its past to illuminate contributions made by women to the medical field that have been previously excluded from the history of medicine.

It appears that turning 500 years old is a pretty good impetus for introspection, and the Royal College of Physicians (RCP) is not passing up the opportunity. In the RCP Museum’s new exhibition,This Vexed Question, the institution invites visitors to examine the gendered history of medicine, and how it often excludes contributions made by women.

“I think people will be surprised to see something this critical, this feminist, in these ‘hallowed halls’ which have such a history of being dominated by men,” says Kristin Hussey, lead curator of the RCP Museum. “Since its foundation, the college’s job was essentially to assign who was ‘in’ and who was ‘out’ in the medical profession, and women were definitely ‘out’.” 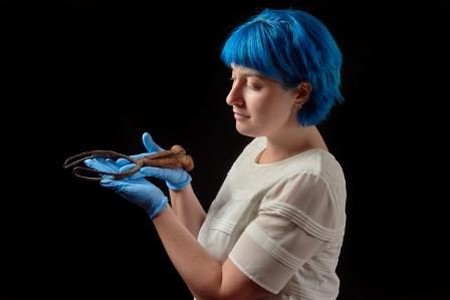 Kristin Hussey holds a pair of 'Smellie forceps', used by male doctors to aid childbirth from the 18th century. Female midwives at the time decried the use of forceps in childbirth as they often injured the mother. | © Royal College of Physicians

With the go-ahead from Jane Dacre, the RCP’s third female president, Hussey and her team undertook the monumental task of re-examining how the institution has engaged with women since it was first granted a royal charter by King Henry VIII in 1518.

“Rather than tell a straightforward story of our own history over the last 500 years, we thought we would do something a bit different and talk about an untold story within medicine which is the role of women in medicine, and debunk the idea that most people have that Elizabeth Blackwell and Elizabeth Garrett Anderson were the first female doctors in the United States and England respectively. We have evidence in the exhibition of women doctors going back much further, even further than 500 years,” explains Berwyn Kinsey, a historian at the RCP.

One of the most telling indicators that women were practicing medicine long before Blackwell or Garrett Anderson were even born comes in the form of trial records from the RCP’s own archives.

Until 1865, the RCP was given the authority to try people charged with malpractice or impersonation of a medical professional. Those found guilty were either imprisoned or fined. In some cases – like one in which a doctor prescribed mercury to a patient to cure a sore throat – the RCP was protecting patients. However, trial records overwhelmingly reveal that charges brought against medical women had more to do with their gender than their acumen as physicians.

Even the famed Anderson had a hard time getting the attention of the RCP. On a small postcard written in her doctor’s scrawl, Anderson asks to attend a lecture: “I wonder if I might be admitted to some dark obscure corner.” Alas, no dark corners were made available. 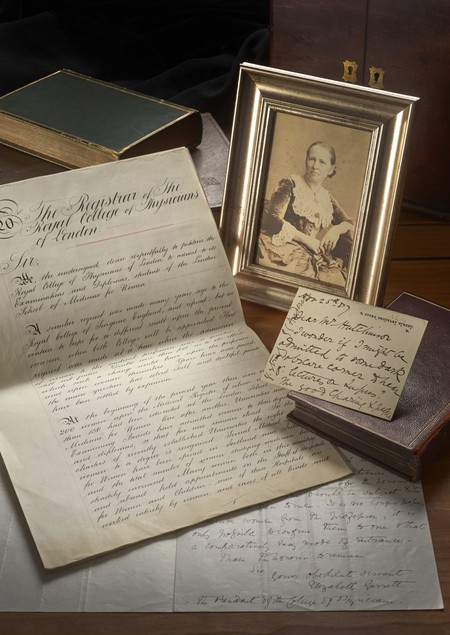 Photograph of Elizabeth Garrett Anderson, along with a petition requesting the RCP admit women doctors (left) and her request for admission to a 'dark obscure corner' (right) | © Royal College of Physicians

“Part of the reason that it was really important to do this exhibition here is because the RCP has been very much the ‘bad guy’ in this story for much of its history,” explains Hussey.

Most of the artefacts in the exhibition were difficult to source. As is the case with most underrepresented groups, much of the information was hidden in footnotes or one-off references. Pieces of these untold stories are found in institutions across the world, but without a dedicated space, they are often overlooked. As a result many of the exhibition’s artefacts are on loan from various UK archives, and curators often found themselves grasping at straws during the research process.

“I got to the point where I was just searching common women’s names. How do you keyword search when women aren’t a part of the formal story? They’re there but in a really hidden way. I was genuinely searching words like ‘wife’, ‘mother’, ‘sister’ because these are the ways that we’ve captured women,” says Hussey. 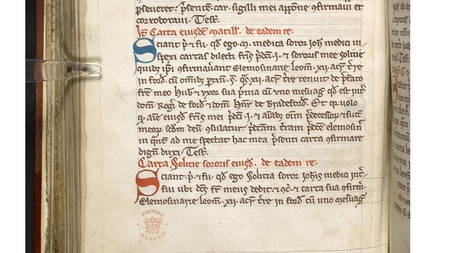 Detail from Record of Deeds indicating existence of female doctors in 13th century Leominster. The women are referred not by name, but as 'sisters' of another doctor, and are also referenced as 'medica', indicating that they were doctors in their own right. | © British Library

This careful interrogation has resulted in a thematic story that demonstrates the determination, progress and setbacks medical women have faced throughout the centuries. However, instead of providing answers, Hussey and her team have taken the exhibition’s theme of This Vexed Question literally.

“We’re calling it This Vexed Question, and we have taken the exhibition as a ‘question’ – a question to the audience but also a question about how we look into the past,” says Hussey. Visitors to the exhibition are intended to walk away with a greater curiosity about other stories that are still left to be told.

In many ways the exhibition is part of a new trend in which institutions are challenging accepted narratives about the past. 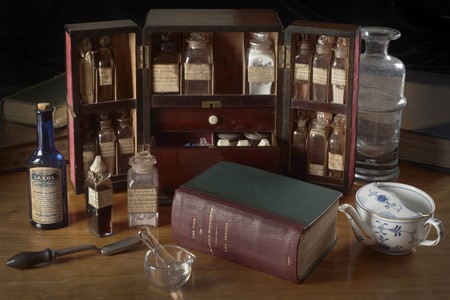 Medicine chest, 19th century with Mrs Beeton's Book of Household Management (1895), in addition to being formal doctors, women in the home have operated as healers in the home. Domestic guides like Mrs Beeton's often included medicinal recipes. | © Royal College of Physicians

Hussey sees This Vexed Question as merely a starting point: “Part of what I think museums should do, and are doing, is to be a bit braver in the stories they put out there, and not be afraid to say, ‘This isn’t a neutral exhibition.’ The exhibition isn’t perfect – I’m sure there are stories we’ve missed or things we could have done better – but it is a feminist exhibition.”

In fact, it’s promising that an organisation as revered and established as the RCP is taking an initiative to push boundaries with the stories it tells. The RCP has entered into its next half-millennium proving that even the stodgiest institutions can embrace progress by turning to self-examination.