The Best Bars to Visit in Soho, London

For whatever draws you into Soho; be it art, music, theatre, or the more risqué underbelly of the area, be sure to take in some of its bar culture too. Whether you are looking to people-watch over your pint or step back in time, drink with vampires or sip something sophisticated far from the madding crowd – here are a few Soho bars you must tick off the to-do list.

The Soho Sky Terrace at The Courthouse Hotel
Bar, British$$ 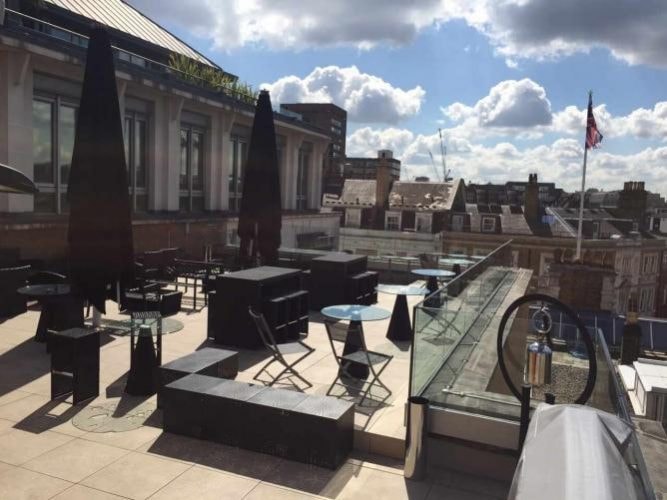 The Soho Sky Terrace at The Courthouse Hotel | © Child PR

Unlike its trendier neighbouring rooftop bar at Sanctum, the five-star Courthouse Hotel was a former Magistrate’s Court. Believe it or not Keith Richards, Mick Jagger, John Lennon and Oscar Wilde were all tried here, and Charles Dickens worked as a reporter back in 1835. Iron bars still remain as a feature inside this Grade II listed building, as too does the Judge’s bench and witness stand. But, up on the top floor, the newly refurbished Sky Terrace is a little square of guilt-free serenity against an impressive backdrop of the Soho skyline. Non-hotel residents can settle down under the stars with a cocktail and a light bite until 10.30pm, or peer over the balcony at the sight of late night shoppers spilling out of Liberty’s. 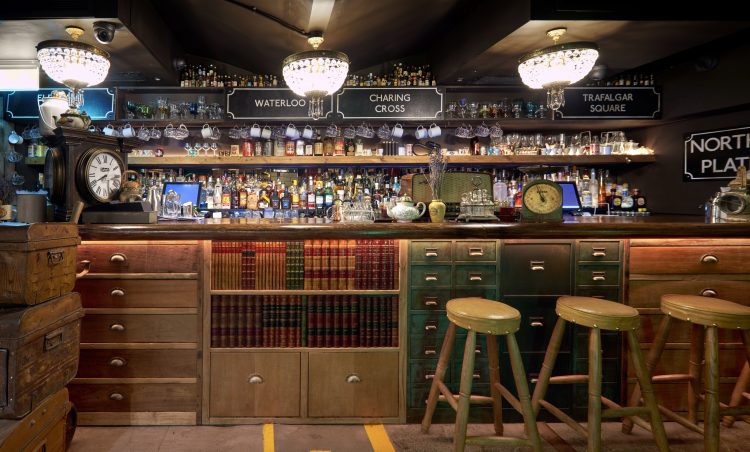 Situated in the disused Kingly Court underground station, which was used as an air-raid shelter, Cahoots is a step back into the swinging 1940’s and bursting with Blitz-spirit. Decorated with sandbags and tube carriage seating, the bar serves ‘Dig for Victory’ inspired cocktails, using ration book ingredients, such as powdered milk, treacle and beetroot. Music policy favours the Jive and Lindy hop, and there are regular immersive events. 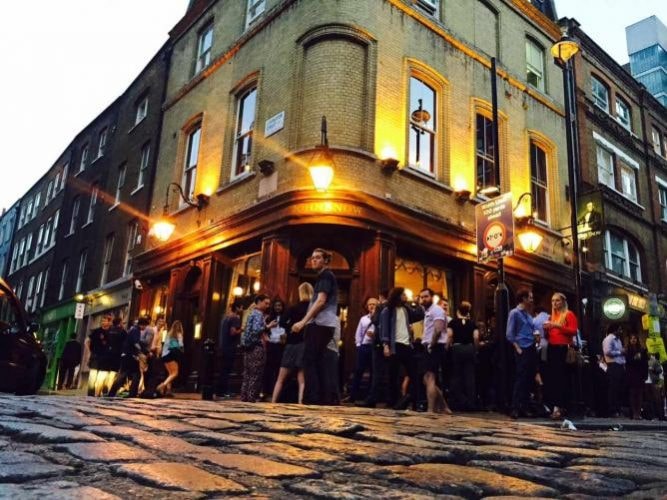 Outside the John Snow | © Rich Hendry

Named after a doctor who traced the outbreak of cholera, the wooden-floored John Snow is one of Soho’s last few traditional pubs. Its reasonably priced selection of Yorkshire ales makes it a popular choice for celebrity raconteurs, local tradesmen and West End theatre actors. Head there on a for the Saturday night stand-up comedy; and if you can’t find space inside there is usually a good atmosphere and a lively crowd on the pavement outside. 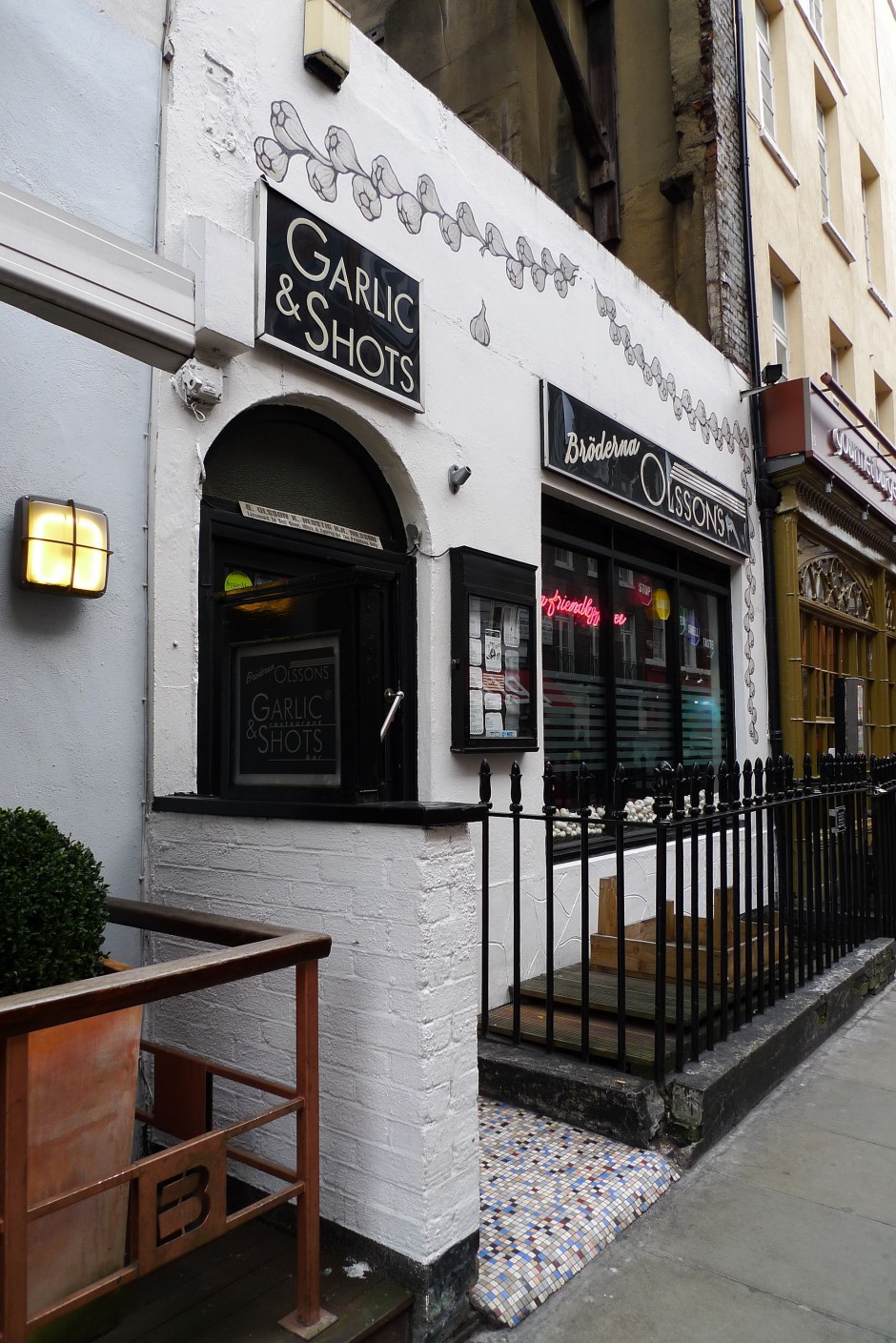 Tucked away on Frith St. close to Ronnie Scott’s, amazingly this conceptual bar (the concept being: add garlic to everything on the food and drinks menu) has survived since 1989 and has spin-offs in Stockholm and Palma. Venture, if you dare, downstairs to The Crypt; you’ll find a mummy in a coffin, a soundtrack ranging from Heavy Metal to obscure Goth, and barely enough light to read the list of 101 infused vodka shots. Garlic and Shots‘ house speciality is the ‘Bloodshot’ – essentially the spiciest, most garlic-infused mouthful of Bloody Mary you’ll ever taste – not the ideal drink for a date night, but definitely unforgettable. 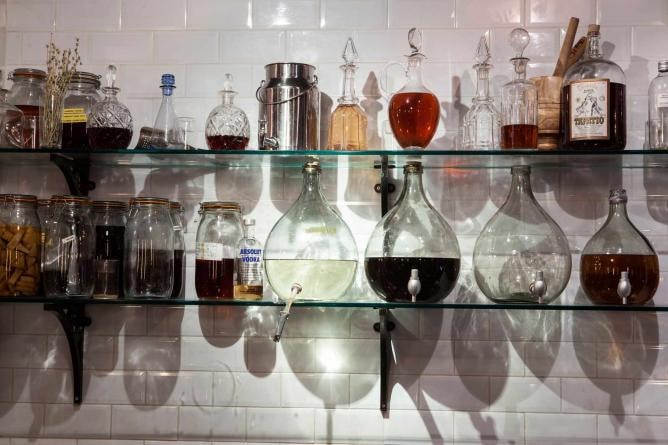 With smoky mirrors and leather chesterfields courtesy of Alfred Dunhill, not to mention a revered cocktail list drawing on British heritage, there is something of a gentleman’s club air about Mark’s. But don’t be deceived (or intimidated) as the bar menu and drinks are divine, often theatrical and delightfully eccentric. We recommend you try the ‘Stiff Upper Lip’, made with green pea-infused Beefeater London Dry gin, Somerset cider vinegar and smacked mint; then chow down on the quail’s egg shooters with Bath pig chorizo, whilst skimming through Mark Hix’s column in The Independent, before grabbing a quick game of billiards on the vintage table.