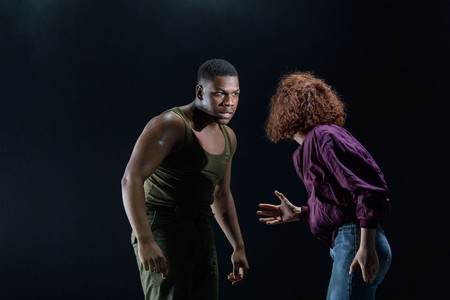 In a new version by Jack Thorne, Woyzeck at the Old Vic offers a compelling rendering of George Büchner’s classic tale about the crippling power of society, and those who cannot excel within it.

Set in Berlin during the 1980s, Woyzeck at the Old Vic centres around the story of a British soldier, Frank Woyzeck who has been relocated to the country after an undisclosed incident in Northern Ireland. With him is his girlfriend Marie (played by Sarah Greene) and their child. They live above a halal abattoir and the incessant smell of rotting meat is one of the more mundane disruptions to their attempts at achieving domestic bliss. As the narrative unfolds, audiences are drawn into a nexus of passion and madness, driven by the main character’s yearning to survive in an unkind world. 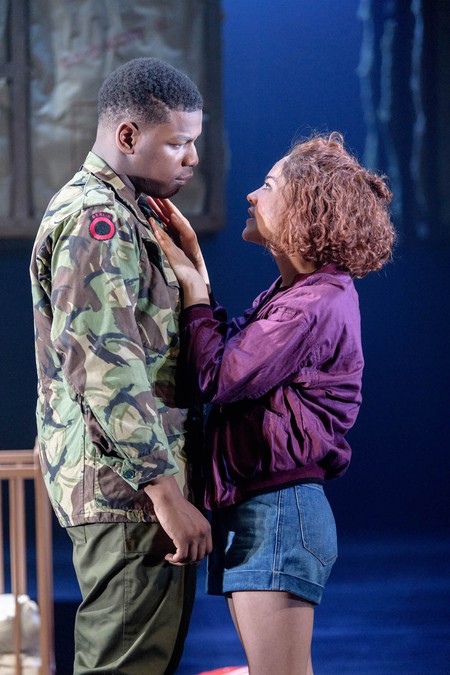 Originally written by Georg Büchner in 1837, Jack Thorne‘s (This is England, Let The Right One In, Harry Potter and the Cursed Child) new version keeps the febrile energy, while making it wonderfully relatable for contemporary audiences. Though a tragic tale, Jack Thorne’s Woyzeck is very funny: John Boyega’s Woyzeck is the straightest of the bunch, as the crew of characters around him enact an almost bawdy comedy – there’s plenty of nudity, sex and coarse jokes. The dialogue is slick and punchy, and sentences bounce rapidly; words are held tightly together by a beautifully orchestrated melody of silences and speech, and delivery wise, the cast don’t go wrong. In re-imagining the narrative, Jack Thorne’s juxtaposition of the malaise engendered by capitalism with the internal strife of Woyzeck, remains compelling and enthralling; the dramatic crescendo is heartbreaking. 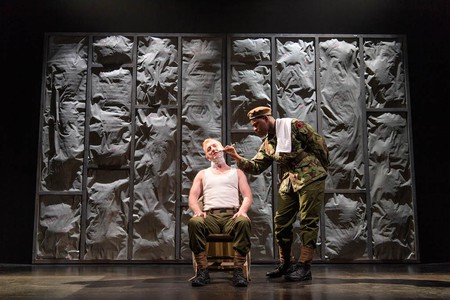 John Boyega is strong and stable in his handling of a character who is not. His physicality throughout his descent into madness is especially powerful, and he comfortably brings humanity to a dehumanised role. As a lead it is a difficult one to play. Woyzeck’s trajectory is clear almost from the start, and he is constantly at the behest of others. His character is shaped by circumstances beyond his control, and it feels like the audience never really know what he wants (beyond money, beyond love) – there’s little nuance in his desires, or his approaches to things, though perhaps that’s the point. Society doesn’t let him flourish; Woyzeck suffers endlessly. But what the role lacks in ‘hidden depth’ is made up for through a vivacious supporting cast who together create a captivating energy which enthrals the audience. Sarah Greene’s Marie is charming and empathetic, while Ben Batt electrifies as Andrews, Woyzeck’s fellow soldier; Nancy Carrol’s Maggie is splendid and repulsive – as the role dictates. 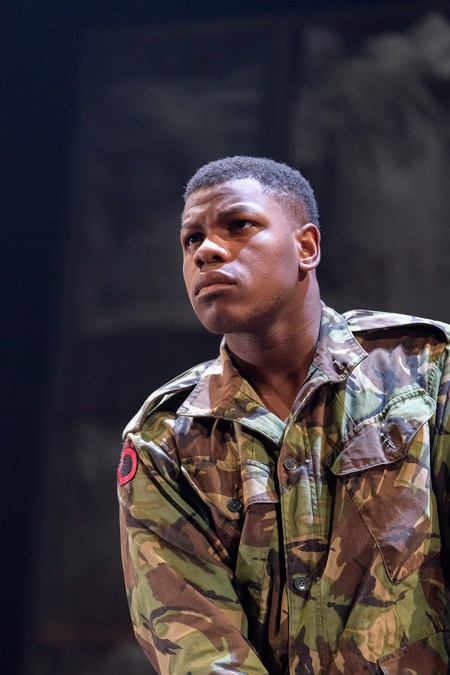 The cast is led by the brilliant direction of Joe Murphy, who offers a slickly choreographed and unsettling cacophony of physical and lyrical interplay. As Woyzeck’s madness heightens, what is real and imagined blurs beautifully. Cast members appear and disappear; the lexical nuances of fast paced dialogue emphasised by these fluid physical changes. Throughout it feels like a dance moving to its own tune, and the choreography helps to boil the intensity of the second half to its fervid climax. The visceral set design helps too, with a few props and details serving to illustrate wider psychological and physical ground.
Woyzeck at the Old Vic runs May 15 – June 24, 2017.