From Soho to Walthamstow, God’s Own Junkyard Is Keeping London Neon

The team behind neon art gallery God’s Own Junkyard has turned a humdrum London warehouse into a cathedral of light. The family business is run by third-generation neon artist Marcus Bracey, who creates exciting, eye-catching custom neon signs, many of which light up the night in London’s Soho.

Entering God’s Own Junkyard, which is hidden away in a nondescript industrial estate in Walthamstow, is like finding the door to a neon Narnia in an East London neighbourhood. The art gallery has set the area ablaze since it opened its doors in 2013. It’s filled with glowing slogans and images, old signs and unusual sculptures, all of which date back decades. 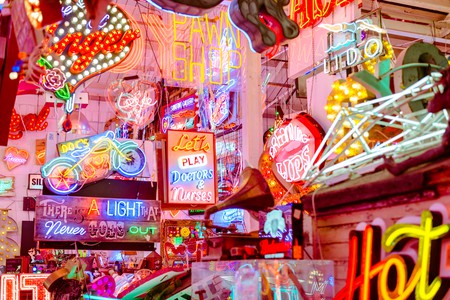 It all started with Dick Bracey, an electrical engineer in the navy who moved to East London after World War II. He created lighting and neon signs for an electrical company before deciding to start his own business. “He was working for funfairs, circuses and carnivals, building [signs] in his backyard,” Marcus Bracey, Dick’s grandson, says. “I’ve always worked with my father, Chris Bracey, and my grandfather. I lost my father in 2014, but we worked together for nearly 30 years.”

Dick and Chris were responsible for the bright lights of the most infamous haunts in Soho, where they often worked on venues owned by pornographer and so-called King of Soho Paul Raymond. Among Dick’s pieces are the clock outside Bar Italia, which many see as a symbol of Soho, and the sign for the Raymond Revuebar theatre and strip club, made in 1958, which Marcus has recently re-lit. “It’s over two kilometres of neon glass – the biggest sign in Europe, I would say,” he says. God’s Own Junkyard has worked with Raymond’s family for three generations, keeping up the Bracey tradition of supplying London’s former red-light district with distinctive signage. 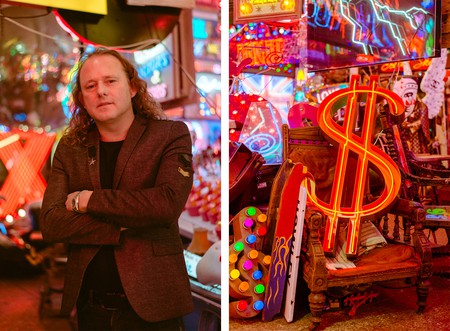 Since the end of World War II, the Braceys have been making neon signs for London’s cafés, bars and theatres | © George Hughes / Culture Trip

A lot of the old Soho signs were saved and are on display at God’s Own Junkyard, which has become a success story in its own right – it welcomes up to 500 visitors a day. “I didn’t expect that,” Bracey confesses. “It’s become this amazing venue, and a spiral of creative talent comes through the door. And it’s not just designers – we get a lot of tourists from all over the world, from the Middle East, Dubai, Australia. Coaches of 80 people pull up on a Friday afternoon because we’re on the tourist board trail of places to go in London.” 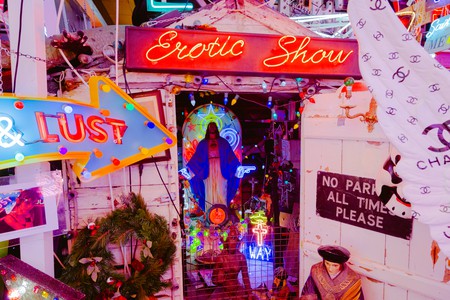 It’s a far cry from how the space looked when they moved in. “It was all dumps, fridges and burned-out cars,” Bracey recalls, “but as soon as we turned the corner into this estate, we knew this was the place we wanted to be, in the heart of Walthamstow.”

Today, the space holds around 1,300 neon pieces. As Bracey gradually switches the signs on each morning, the lights flicker for everyone on the estate. “There’s a mini substation out there, and it hums,” he says. “It makes a big nnn as soon as we turn everything on. It’s very expensive – we spend £720 a week on electricity.” 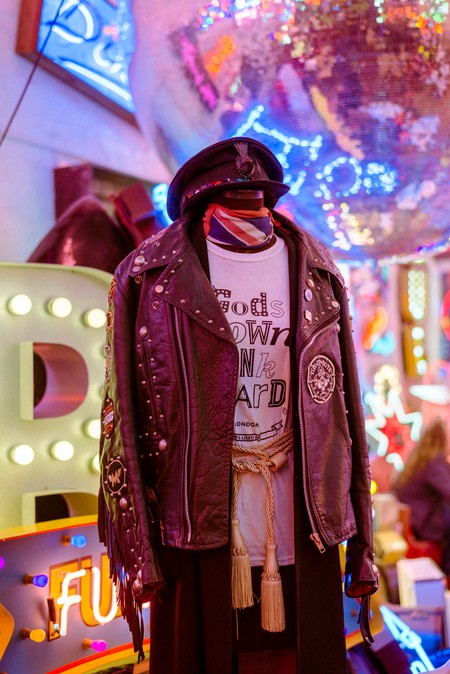 God’s Own Junkyard has attracted more businesses to the industrial yard, which now boasts a microbrewery and a gin bar, and has become a much-loved weekend destination. “All the cars disappear, the tables and chairs go out in the summer and everyone comes here and spends a good hour,” Bracey says. “I’ll sit here on a Saturday, reading the paper, keeping myself to myself. And I look at the initial reactions [to our work] on people’s faces – it sparks this magical kind of interest in their minds. Like, ‘How did this happen?’”

As well as running God’s Own Junkyard, Bracey’s team still make signs for commercial enterprises, but as much as 90 percent of their work now comprises art commissions. Neon wasn’t always as popular as it is today; interest in it died off in the late 1980s and early 1990s as LED lights grew in popularity, but now a revival is in full swing. “People realised they couldn’t achieve all these lovely colours with LEDs, and it just wasn’t as exciting, it wasn’t an art form. Neon is an art form,” Bracey argues. These days, he says, neon’s appeal is broader than ever. “It’s not as sleazy as it used to be in [Soho locations] Walker’s Court, Rupert Street and Brewer Street.” 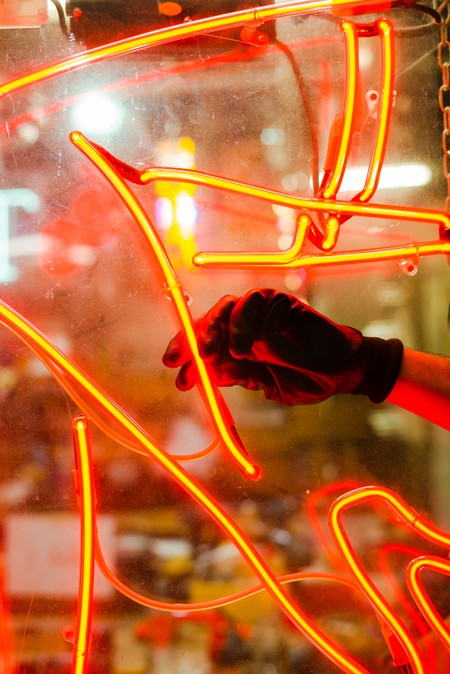 One of Bracey’s signs can have up to eight people working on it – engineers, people to fabricate and build it in the workshop, and finishers. His signature style mixes sign-writing, different fonts, reclaimed wood, light bulbs, and metal and neon letters. “From the sketches up to the final finishing, you always want to add your little flair, your final touches. You’ve got that dream of how you want it to look on someone’s wall,” he explains. Among Bracey’s customers are Elton John and Kate Moss, and signs made by him and his family have been used in films including 1982’s Blade Runner (they’ve got about 30 pieces from the movie tucked away), Judge Dredd (1995), Eyes Wide Shut (1999) and Charlie and the Chocolate Factory (2005). 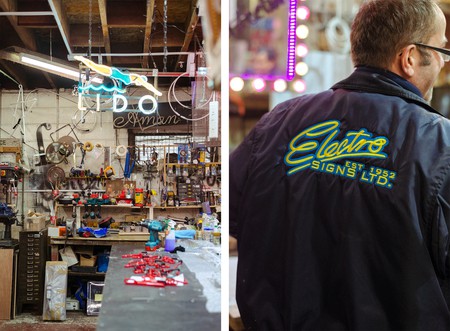 God’s Own Junkyard plans to expand in 2019, with a new bar, a private gallery space, more pop-up shops in London and potentially a few in Europe | © George Hughes / Culture Trip

His two daughters, Amber and Ella, have inherited the family’s flair for neon. “They’re the fourth generation,” Bracey says, proudly. “They’re intoxicated by it.” He’s going to need their help, as God’s Own Junkyard is set to expand in the future: a new bar and private gallery space will open upstairs in 2019, displaying a selection of previously unseen artworks by the Braceys. Marcus also plans to open more pop-up shops in London and potentially expand into Europe.

Whatever happens, God’s Own Junkyard will continue to light up East London. Bracey is optimistic. “My dad’s legacy is going to carry on,” he says. “I got the bug from him and we’re going to carry on where he left off; nothing’s going to change. The future’s bright.”