Everything You Need To Know About Adwoa Aboah 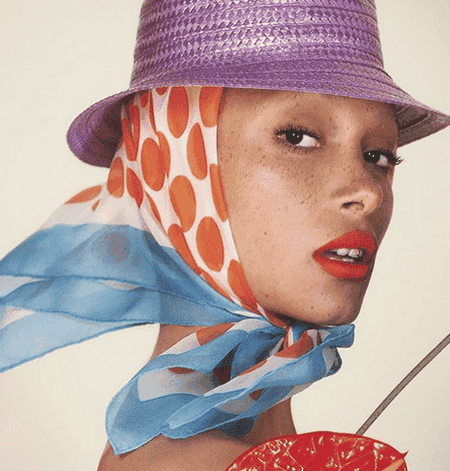 You might know Adowa Aboah best from her striking close-up shot on Edward Ennifel’s debut cover of Vogue, which took to the shelves of just about every magazine stockist in the country in November and marked a shift in the publication’s creative direction. The shoot was titled ‘Unified in Harmony’. What you might not yet be familiar with, however, is that there’s so much more to the West London–born beauty than just a photogenic face. Here, we take a look at what makes Adowa Aboah such a strong cultural figure and how she’s helping to redefine the expectation of what it means to be one of the globe’s most coveted faces in fashion.

Read about the history of editors in British Vogue here.

It’s safe to say that Adowa Aboah is one of fashion’s most credible models of the moment, having walked the runway for couture houses such as Chanel and Dior as well as more contemporary labels like Alexander Wang and Marc Jacobs at various Fashion Weeks across the globe. A true chameleon and now a household name, her latest ventures see her fronting Marc Jacobs beauty and working with Burberry and photographer Jeugan Teller on the brand’s first campaign of 2018. You can get a sneak peek of the pictures on Vogue Paris here. It’s no surprise that this isn’t your average campaign shoot – the photographic series sees Aboah posing naturally alongside her family, depicting a certain rawness and capturing the personality of both the model and the brand in equal part.

But there’s more to Adowa Aboah than looking great in clothes and makeup, and much like many of the women we see stepping into the spotlight during this cultural shift – a newly prominent feminist world, if you will – she’s not purely here to be a model but she’s here to make a change. Having suffered with years of depression and drug addiction so badly in the past that she had two stints in rehab, attempted suicide and thus spent four days in a coma, Aboah has been through an intense emotional journey. Now, she uses her prominence in society to raise awareness on topics of this nature.

Much of her modelling work has hinted at the desire to address current feminist issues and whether it’s the spontaneous shaving of her head or her appearance on the cover of US Vogue back in March 2017 – a group shot celebrating model diversity titled ‘No Norm Is The New Norm’ – there’s been an underlying focus on her own personal message since she first broke the industry. That message? That every woman should have a voice.

In 2015, the same year that she attempted suicide and, in stark contrast, was featured on her first Vogue cover, she first spoke out about her personal experiences and launched a new project. Gurls Talk is a platform that allows for women to talk openly about topics that are often hard to approach: mental health, body image, sexuality and the pressures of social media. It communicates the power of having a voice and the benefits of communication surrounding sensitive and poignant topics. Coining the project as being everything that she herself yearned for when growing up, Aboah is dedicated to raising awareness. The online platform provides a safe space for women to share their own experiences or to listen and read about other people’s, whether they’re directly relatable or not. Those with a story to tell can submit it directly to the website to be featured, and there’s a no-judgment-or-stigma guarantee. Fame association aside, this project is undoubtedly making an impression on the people who need it the most, with new submissions being made to the digital forum daily and a loyal social media following (at the time of writing this article, Gurls Talk had 127k Instagram followers and over 1,000 subscribers to the YouTube channel). Model, icon and spokesperson, Adowa Aboah is playing a big role in changing mindsets, and she’s using fashion as a way to do so. If these early stats are anything to be believed, then there’s no limit to how far Gurls Talk can go.

Very happy to be modeling these incredible, bespoke @Gucci ears for @BBCCiN. Congratulations to @Kegrand on this beautiful collection. Get bidding now via bbc.co.uk/pudsey #CiN