For a select group of Londoners, the way to start Christmas Day is to head to a park, strip off and jump in a freezing lake – and they do it every single year.

For many, Christmas morning is a combination of nursing a hangover, while simultaneously unwrapping presents and doing all the food prep that should have been done when you were actually in the pub. Even if you’re on potato peeling duty, you still have the comfort of a dressing gown, a roaring fire and a fancy breakfast, probably a glass of champagne in tow, or maybe even all of the above. There are also those who can give all that up (or at the very least, postpone that) in favour of heading to the park for a dip in freezing water. 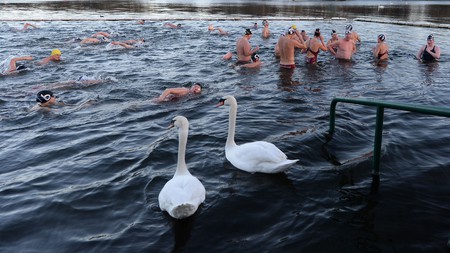 Hyde Park, in Central London, is home to the Serpentine, a 40-acre lake that runs through the middle of the park. It it also the home to the Serpentine Swimming Club (SSC), formed in 1864, who have permission to swim in the lake as long as it’s before 9:30am. The SSC hold races every Sunday morning throughout the year, as well as the Peter Pan Cup every single Christmas morning. With temperatures often as low as 4°C, the annual race is not for the faint-hearted and all competitors must have experience of swimming in cold waters. The race is, however, cancelled if the lake freezes over (although some competitors in the past have broken parts of the ice and gone for a quick dip regardless).

Amateur swimmers, elsewhere in London and beyond, swear by a morning swim, regardless of the weather. At the SSC, wetsuits are allowed but ‘considered by many not to be within the true-spirit of an all-the-year-round open-air swimming club.’

The distances of the races depend on the time of year, with shorter races held in the chillier months due to the drop in the water’s temperature. Races have kept their traditional imperial measurements and can be anything from 40 yards (37 metres), up to 1,000 yards (914 metres). The Peter Pan Cup is a 1,00-yard dash and takes its name from the donor of the 1913 race: JM Barrie, author of Peter Pan. 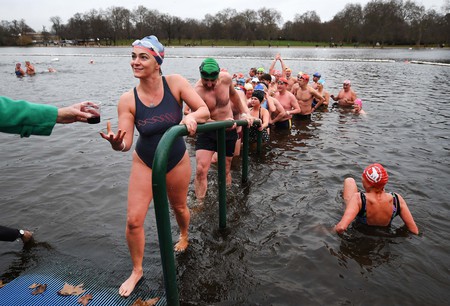 Mandatory Credit: Photo by ANDY RAIN/EPA/REX/Shutterstock (7665854m) Swimmers emerge from Serpentine Lake in Hyde Park following the annual Peter Pan Cup, an annual Christmas Day swim in London, Britain, 25 December 2016. The event, which has run every Christmas since 1864, sees outdoor swimming enthusiasts from the Serpentine Swimming Club dive into the chilly lido to see who can be first to swim 100 meters. The waters usually drop below 4C (40F) degrees in the winter, so swimmers need to be acclimatized to the freezing temperatures before participating in the race. The Peter Pan Cup is only open to members of the Serpentine Swimming Club who have qualified during the season. Swimmers enjoy mild weather for the annual Christmas Day swim in Hyde park, London, United Kingdom - 25 Dec 2016 | © Shutterstock/REX

The race is for SSC members only, but spectators can come along and watch for free and are encouraged to do so. The race is handicapped (where the slowest set off first and the fastest go last), allowing every person competing the opportunity to win. The SSC has an Honorary Handicapper, who will have watched participants in their previous races and know the standards and times of those competing.

According to the SSC’s website, the following rules apply to anyone who wants to race on Christmas Day:

‘Members who are NOT on the handicap list before the start of the Winter Series will be required to compete in seven of the nine Winter Series races to qualify for the Christmas Day race.’

The Peter Pan Cup race record is held by Nick Adams, who swam the 100 yards in 57 seconds on Christmas Day 2002. If there is anyone who fancies their chances of braving the icy waters that London has to offer at the end of December and taking that record, they can become a member of the SSC. It might make you feel less guilty about the goose, pâte, cheese and pudding that follows later in the day.