Domosophism: How the World’s Best Chefs Celebrated the Art of Staying at Home 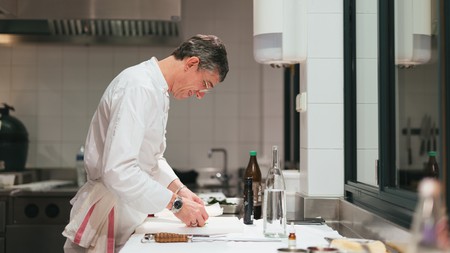 Three months before lockdown rocked the world – and transformed the food and drink industry for good – 148 of the world’s best chefs foretold the future with a mass display of performance art, celebrating the joys of self-lockdown, and the creativity that comes when you keep yourself at home.

It started at 7pm in New Zealand on 3 December 2019, 53 floors off the ground at Peter Gordon’s flagship Auckland restaurant, the Sugar Club. Diners – some who have adored Gordon for years, others eating their first meal at this iconic restaurant – were presented not with the idiosyncratic dishes of the so-called Godfather of Fusion. Instead, they were served a menu sent from Spritmuseum, a restaurant in Djurgården, Sweden, over 10,500mi (16,898km) away, which had been remixed by Gordon, making food that was recognisably Swedish and Kiwi, both and neither, in equal measure.

The first dish of that meal would set off a chain that would last a full 24 hours, where 148 of the world’s super chefs would, in protest of their own high-flying lifestyle, stay in their kitchens and launch a general strike. They sent their menus across the world, and in turn, received and cooked someone else’s for a night, in a display of what they all called Domosophism – or the art of staying at home. 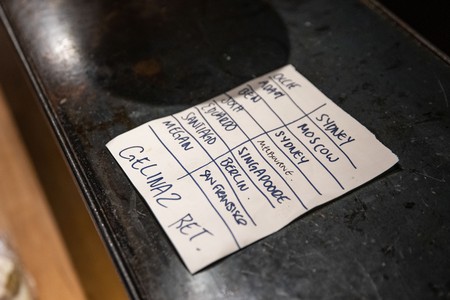 148 restaurants dotted all over the world took part | © Filippo L'Astorina

If that sounds performative, that’s because it was. This synchronised stand against the never-ending chef’s circuit – the book tours, the collaborative dinners, the TV appearances and so on – was the latest example of kitchen performance art organised by the culinary supergroup GELINAZ!, and its influential road manager, Andrea Petrini.

For well over a decade, Petrini has coordinated these mass events, drawing in the biggest names in food to perform on the stage of his creation. No matter if they’re starting out with their very first restaurant, like Santiago Lastra, or have so many Michelin stars that they don’t know what to do with them, like Alain Ducasse, Petrini has an uncanny ability to convince chefs to drop their normal proceedings for a night or two, and cut loose with his free-spirited, artistic ethos. 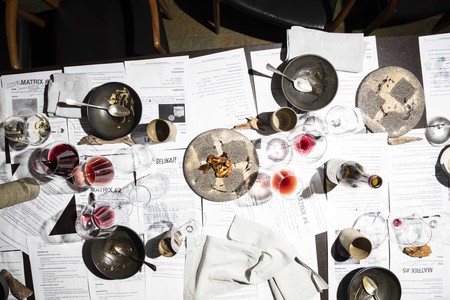 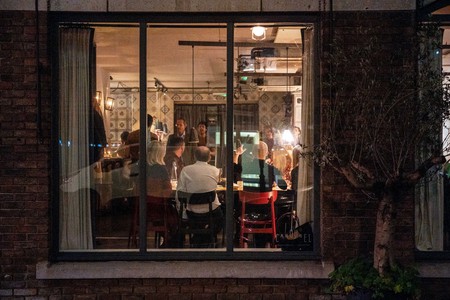 There have been events in abandoned churches in the Italian countryside; destination dinners in frozen forests, where chefs were sent out to pick and cook whatever they could find and gallery exhibitions where chefs were asked to put down the pots and pans and make something that wasn’t in the least bit edible. There had been shuffles, in GELINAZ! parlance, like this before, where chefs would literally swap kitchens for a night, and surprise their diners at the end. This time, however, Petrini’s theme was something that has since become more relevant than he ever could have imagined: he was extolling the virtues of (temporary) lockdown. 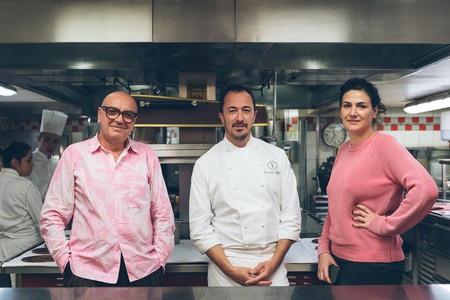 The chefs who he corralled to participate were signed up to a newsletter, titled the Domosophist Weekly, which plied the chefs with art, music, philosophy and grandiose political statements that encouraged boldness, standing alone and making “the loudest social statement forecasting the shape of things soon to come.” Petrini requested that each chef create an entirely original eight-course menu, that could be as vague or specific as they like, as well as a short directorial debut, where the chefs would film a call to arms for Domosophism in whichever way they saw fit. 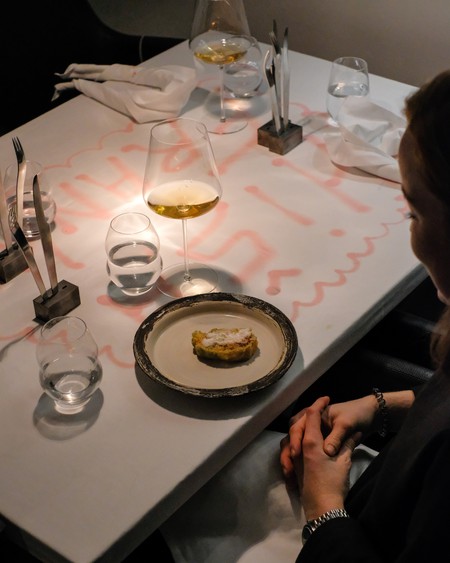 Chefs were encouraged to be bold when creating their menus for the event | Courtesy of GELINAZ!

For Massimo Bottura, this took the form of a guide to washing your hands. For Ana Ros of Hiša Franko in Slovenia, it was a Tracey Emin-esque clip of Ros’s bedroom, with the chef herself hidden under the duvet. Lee Tiernan, of London’s Black Axe Mangal, submitted a mock execution shot like a snuff film. As a collection of films, they could not be more bizarre; this constellation of culinary superstars, usually captured in glossy tones for prestigious food TV, or in the pastel comfort of Saturday morning cookalongs, produced and presented their own slithers of situationist art.

The GELINAZ! band members for the night – all 148 of them – revelled in the extra freedom afforded to them with designing and receiving their allocated menus, or matrixes, as Petrini called them. In London, Jeremy Chan – the polymath head chef of the Michelin-star Ikoyi – described “sketching [his] out on a long flight back to the UK… half-thoughts of things that I thought might work together, just really loose. I left the rest to whoever got it.” Chan’s menu ended up in the hands of Marc-Olivier Frappier, 3,000mi (4,828km) across the Atlantic in Montreal’s Mon Lapin. In turn, Chan had an anonymous menu of gutsy Flemish home staples to reinvent, issued from Brussels by Bon Bon’s Christophe Hardiquest. It was definitely the first time – and who knows, maybe not the last – that a meatball in cream sauce appeared on one of Chan’s plates. 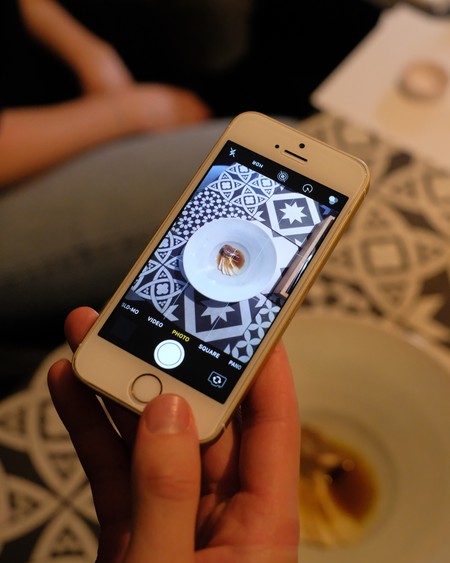 The event connected chefs based all over the world | Courtesy of GELINAZ! 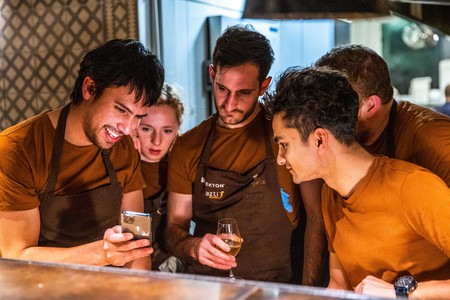 After each menu’s creator was revealed, chefs toasted to the meal they had prepared | © Filippo L'Astorina

One by one, as dinner wrapped up, the chefs had it announced to them who’s food they had been cooking, and everyone clapped and cheered and toasted the performance like they’d spent a night in the theatre. All in all, an achingly arty event that, if it succeeded in anything, kept some globetrotting chefs moored to their kitchen for an evening at least. In the GELINAZ! spirit, everybody performed their food, rather than merely cooking it. But in retrospect, the evening takes on new life, and new meaning. 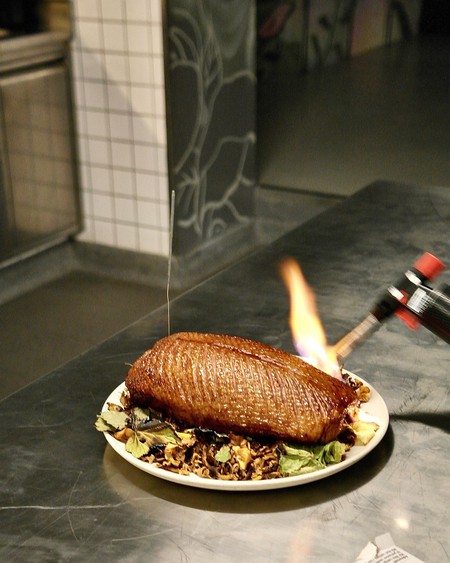 All the participating chefs relished the opportunity to create dishes with complete creative freedom | Courtesy of GELINAZ!

Aside from the self-evident reinforcement of the art of staying at home (you may as well make an art of it now, what choice do you have?), this evening of Domosophism was likely one of the last few times that chefs could be artists for their own sake. It is a crushing understatement to say that the industry has changed since the onset of Covid-19; its old order – the snug tables, busy kitchens, multi-course menus – is now gone, very possibly for good. Reinvention is now necessary for survival, and all certainties are out of the window. It is, in this case, a blessing that these restaurants had one night’s practice in bunkering down, shaking themselves loose and wearing a different identity for the evening. They may be Domosophists for some time yet.