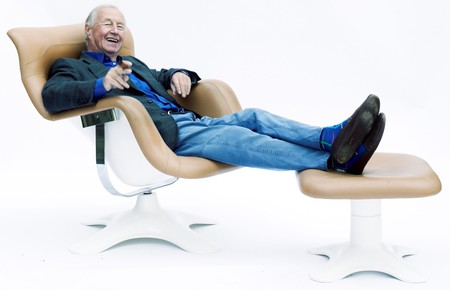 British designer Sir Terence Conran brought modern design to the masses via Habitat, the Festival of Britain and London’s iconic Design Museum. He is also the man behind many of the city’s thriving restaurants and hotels, including the Andaz in East London, where he has just designed an exclusive suite in collaboration with AIDS charity (RED).

At 86 years old, Sir Terence Conran remains the consummate businessman. Even his outfit, trademark Conran blue braces (the signature hue used in his Conran shops) and a tiny Michelin man brooch on the lapel of his jacket (a reference to his restaurant Bibendum in the old Michelin building in London), is a branding exercise. These are tiny details, but then Conran has a keen eye for detail. 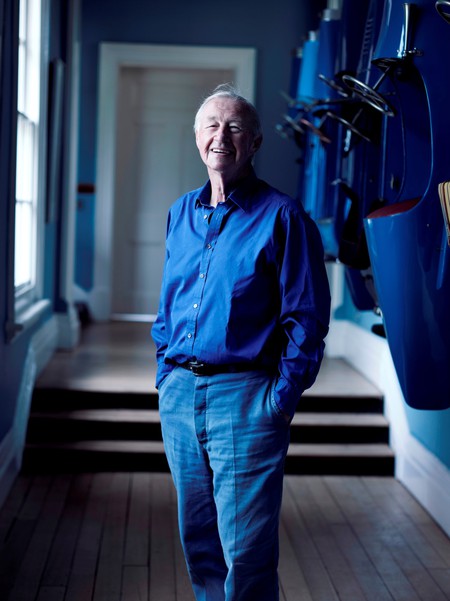 When the designer first came across the Andaz, it was then the run-down Great Eastern Hotel that had been put up for sale by Railtrack – Conran smelt a bargain and paid a visit to the 19th-century building to see if it had potential. “I’ll always remember arriving at the reception desk and being asked ‘how many hours do you want it for?’ Which says something about how the hotel was used at that time – by over-rewarded city lads!”

The self-claimed ‘visionary and lunatic’ took the project on nonetheless, ploughing £65 million into transforming it from a ‘derelict’ building into one of the first design-led hotels. Conran eventually sold it on to the Hyatt group in 2007, only to be called upon years later to redesign its (Andaz)RED Suite – a luxury room that supports the fight against AIDS by donating 30% of the booking fee to the charity. 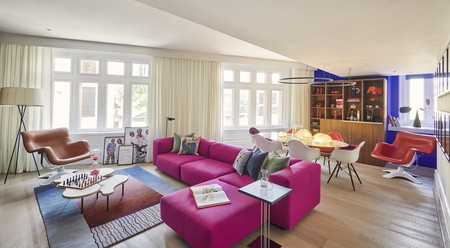 The designer was asked to create a residential-style suite that would suit a millennial audience, ironic given Conran’s age. ‘I just wanted to make a place that was fresh and energetic,’ explains Conran. ‘I’ve stayed in hotel rooms around the world and usually they make me a bit sad and morose. One of my favourite hotels in the world, however, is the Park Hyatt in Tokyo, which I’ve stayed in endlessly. It has immaculate, wonderful service, even down to the most perfect peach on the table. Little things like that just cheer you up and make you think the world isn’t such a bad place after all.’ 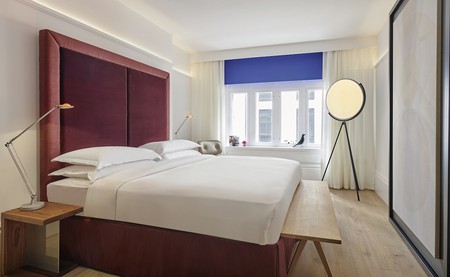 The Savoir bed, chosen by Conran. The TV is artfully hidden behind a locally produced artwork | © Andaz

True to his word, the suite does have a sense of joy de vivre about it, with signature cobalt-blue accents, a magenta-coloured sofa and clashing red- and orange-upholstered Eames chairs. ‘We’ve also made quite a lot of special furniture for the project, such as the bar with a pewter ledge and a copy of a one-off coffee table that I have at home.’ Conran also included two Karusselli loungers, the ‘most comfortable chair in the world’ according to him, as well as a totally opulent Savoir bed that he refers to as ‘a throne’. 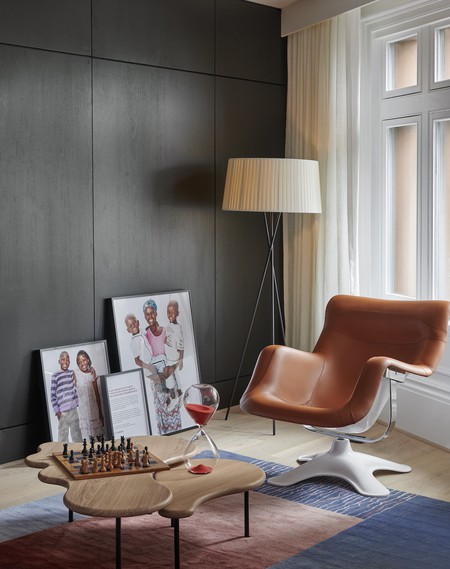 Conran's favourite chair, the Karuselli. Pictures by Ian Rankin commissioned by (RED) are propped up against the wall | © Andaz

Conran has worked his magic on many other dilapidated buildings over a 67-year career in design. But it is the first project of this nature, an adroit conversion of the Michelin building into the Bibendum restaurant and Conran Shop that proved the defining moment of his career. ‘It was the greatest excitement to take this disused building and bring it back to life – it’s undoubtedly my favourite in London. I like the humour of it, and that Monsieur Bibendum is reflected in the stained-glass window.’ 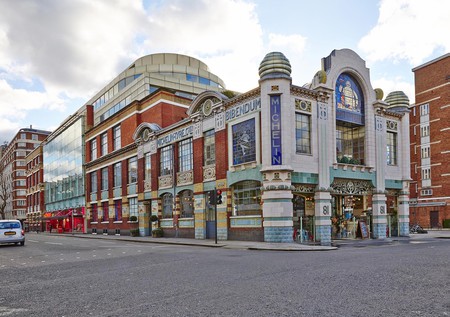 The Conran shop is undoubtedly his most personal project, but his masterminding of the Design Museum will be his greatest legacy. ‘Habitat became a public company and for the first time in my life there was tons of money, so I thought, “what can I do that’s important for the country?” I used to go as a student to the Triennale exhibitions in Milan, which was a great inspiration to me, but I realised nowhere in the UK could you see modern design exhibited, certainly not modern design from other countries, so I decided to set up an exhibition space.’

Conran pulled some strings with his friend Paul Reilly, then-head of the Design Council, and persuaded Roy Strong at the V&A to give over the museum’s old boiler room for five years, which became the Boilerhouse project. After its success, Conran sought a larger premises at Butler’s Wharf and found a disused banana factory, which he remodelled in a Modernist style in 1989. Not everyone was keen on it, however, including Prince Charles, who refused to open it after a meeting at the palace.

The roof of the new Design Museum in Kensington | © Gravity Road

‘We went to see him with the model and Charles peered at it with a rather disapproving look and said, “Why has it got a flat roof? And why are the windows rectangles rather than an arch like all the warehouses around you?” I explained that we were trying to reflect Bauhaus, and we did very successfully, but he didn’t like it. I’ve been meaning to ask him to come and look at the new building in Kensington. It’s got a roof called a hyperbolic paraboloid, which is about the most complicated design you could have, and I wanted to say, we’ve done this Charles, because of you!’

Conran’s desire to bring Modernism to the masses started out with the Festival of Britain on the South Bank in 1951 when he was working for Dennis Lennon, helping on the Transport and the Homes and Gardens pavilions. ‘It was the start of change, which had been quite slow, because London was in such a miserable mess after the war, but it was the first time the public saw Modernism at the Festival of Britain, and actually liked it.’ 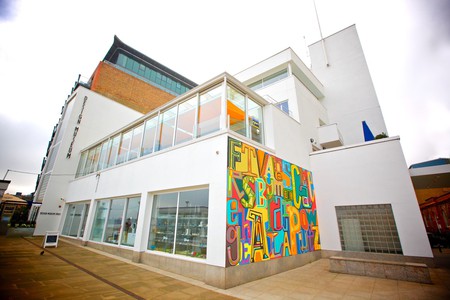 It wasn’t long after this Conran decided the tonic post-war Britain needed was a bit of the continental lifestyle after travelling around France, Spain and Italy. He opened his first restaurant The Soup Kitchen in 1953, which sold exoticisms like French baguettes, espresso and soup – in mugs. In the 1960s, he eventually took this idea further, bringing the gallic lifestyle into people’s homes via Habitat. ‘We wanted to bring Elizabeth David into people’s kitchens,’ says Conran. ‘She talked a lot about French equipment but no-one was selling it, so we provided it. You couldn’t buy a decent pan, or a casserole dish. We imported good knives from France and we did mad things like the Chicken Brick.’ 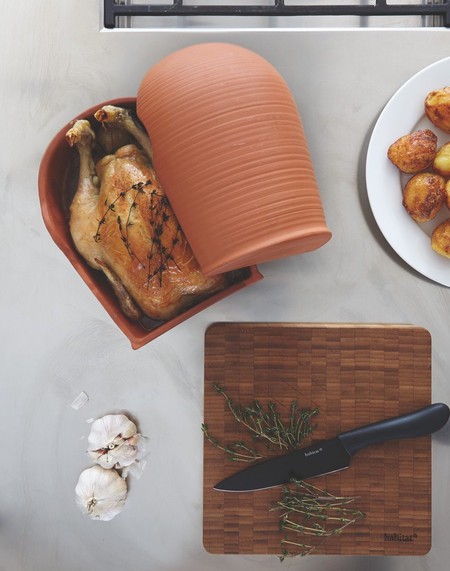 While Conran confesses he would have loved to have ‘done IKEA‘ and admires its ability to create ‘well-designed flat-pack furniture at remarkable prices’, he was the first to bring the likes of paper Japanese-style lanterns and beanbags to the hip British youngsters of the 1960s and 1970s. ‘It’s fair to say ‘lifestyle’ does describe what we did with Habitat; we created a style of life that young people found, as I did, very attractive.’ And it’s this desire to provide fresh, interesting and innovative concepts to the next generation that keeps Conran ticking, from hipster hangouts in Shoreditch to his accessible furniture range for retailer M&S. One thing’s for certain, design is in Conran’s blood and retirement isn’t an option. He will always remain a young-at-heart designer that’s hot on the heels of the next big thing, or indeed, the next business opportunity. 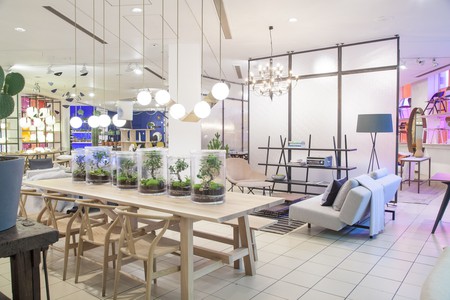