Funding for the arts in Britain is under pressure, and there is a danger that the country’s rich cultural scene could be threatened. Two recent exhibitions in London aim to address this possible crisis in UK culture, using work by great artists to promote the importance of art for all. 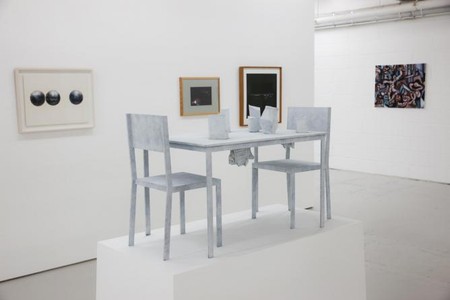 Funding for the arts has been a hot topic in recent years in Britain. The Arts Council had its budget cut a further 1.13% for 2014/15, while research has suggested that local councils may have to cut allfunding to ‘non-essential’ services such as libraries and leisure centres by 2015. The Paying Artists Campaign launched by AIR and a-n has found some shocking statistics about how drastically artists’ incomes have dropped: more than 70 percent earn less than £10,000 a year, with 71% reporting they received no fee at all to exhibit in publicly-funded galleries. But clearly there is money in the arts, as the market continues to boom with exorbitant prices fetched at auction. 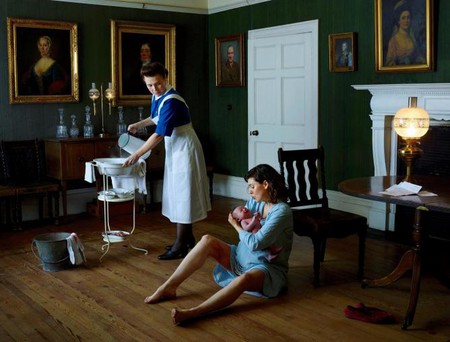 Lottie Davies: My Mother Was Born in a Bucket. Courtesy the artist

Indeed, the gaping disparity between the haves and the have-nots is probably as big in the art world as anywhere else in society. So in this context of public funding cuts and low pay for the majority of artists, surely there’s more scope to distribute some of the wealth found at the top of the art world to the grassroots, outside the big-name organisations. This month in London, there have been two fine examples of established artists donating their time and work to help fund programmes to help the less fortunate. 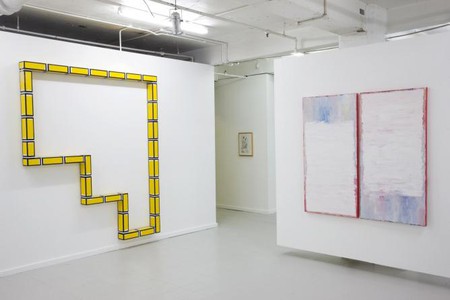 The exhibition Crisis Commission is part of homeless charity Crisis’ wider arts programme, and brings together work by established artists such as Martin Creed, Mark Wallinger and George Shaw, alongside work produced by clients of the charity. It is testament to the curation by BALTIC’s Laurence Sillars that most pieces hang together well, with very few standing out as obviously amateurish. Whilst the fact that at the end of the show’s run the works will be auctioned off with the proceeds going to Crisis is laudable, the good cause shouldn’t overshadow the artistic merit of the show. And it doesn’t. Whilst the context of the exhibition and circumstances of some of its artists adds deeper levels of poignancy, Crisis Commission stands out as a genuinely brilliant group show. 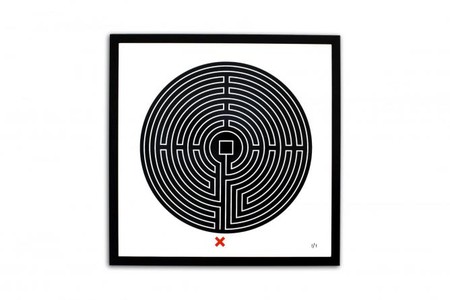 The theme of home threads these disparate pieces together, weaving them into a grand patchworktapestry, which approaches the subject from myriad angles. What’s more, Ben O’Connor and Garry Lemon’s film which is screened towards the end of the exhibition really brings it all together, interspersing interviews with several of the exhibited artists. Turner Prize nominated George Shaw’s ‘End of Terrace’ was positively made for an exhibition like this. Depicting his childhood home, his distinct picturesque landscape style applied to unusual subject matter simultaneously evokes the competing emotions of heart-warming nostalgia and bleak despair. ‘Pillow’ by Gavin Turk is brilliant in its simplicity, a cool print of a solitary soiled pillow sets the mind racing with questions such as ‘what is it doing there?’ and ‘who left it behind?’ 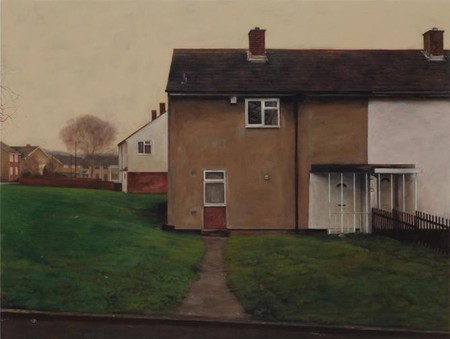 A tortoise with sticks for legs balances precariously on a tower of cardboard boxes, its bronze shell resembling a soldier’s helmet. ‘Wherever I Lay My Hat’ by Bill Woodrow is clearly a comment on the uneasy balancing act that confronts any homeless person, perhaps drawing a parallel with the nomadic and battle-ridden life of a soldier; everyday is a battle when you’re on the street. Lee Hoyland’s ‘British Born Gutter Raised’ resembles a haunting skull-like figure made out of a melted Union Jack, with a Basquiat-like freedom and verve. There’s simply too many great pieces to mention them all, it really is a triumph. 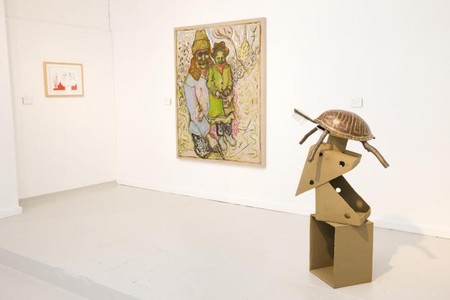 Leslie Morphy, chief executive of Crisis, explained that the charity invests so much in its arts programme because ‘engaging in creative activity can be a crucial step on the journey out of homelessness’. She remarked that ‘when you visit the art classes we run across the country you see that great art can come out of adversity, but also that adversity can be overcome through art.’ This is certainly a persuasive argument for securing public funding for arts programmes in lots of different contexts, but as money becomes less forthcoming, the burden will increasingly be left with charities to pick up the slack. When asked how the Crisis Commission funds would be used, Morphy said ‘(they) will help us continue to aid people overcome adversity and homelessness – not just through art but learning, education, housing and employment services.’ 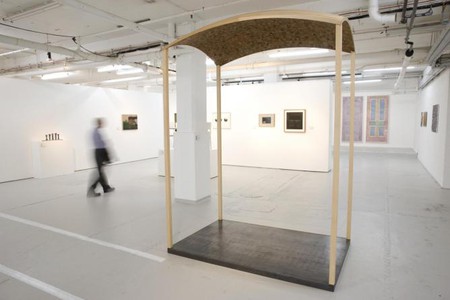 In a similar vein, East London-based arts charity Create recently hosted an event at the prestigious auction house Bonham’s, in which works by Ken Howard OBE, Rob Ryan and Lionel Aggett were sold off to fund the charity’s future projects empowering disadvantaged communities through the arts. Nicky Goulder, Create’s chief executive said she was ‘thrilled that we were able to auction the work of three exceptional artists to raise vital funds for our work: their talent and generosity will enable us to reach out to many more disadvantaged and vulnerable people over the coming months.’ On the role of established artists in helping the less fortunate, Goulder said that ‘professional artists are central to the delivery of our programme – they lead our workshops and inspire our participants and we see at first-hand the incredible difference our projects make to participants’ lives.’ Ken Howard expressed that he was happy to donate his work to Create because he ‘believes in their work’, adding, ‘Create is about encouraging youngsters to be involved in the arts which is very, very important’.

Not only did this event see established artists donate works, Bonham’s also offered its services freeof charge. Naturally, the big auction houses are one of the greatest benefactors of the booming art market so it is encouraging to see them giving something back to help the grassroots. 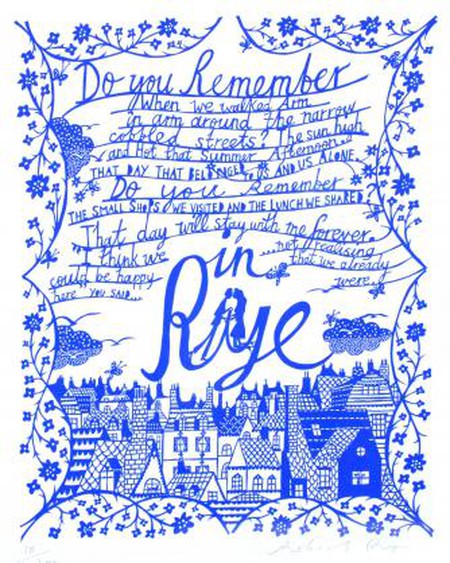 The programmes offered by Create will hopefully help nurture a new generation of artists, from a diverse array of backgrounds, including those with disabilities and young offenders, groups who often underrepresented in the arts. Even if none of the groups who Create work with go on to produce established artists, their work will still be of a wider benefit to the arts. Underprivileged groups are also severely underrepresented in terms of audience numbers for the arts in the UK. Therefore, the funds raised will not only potentially be raising the next generation of artists, but also the next generation of audiences. Reaching new audiences – especially ones who traditionally have low engagement levels – can only be good for the sector as a whole.

If funding for the arts in Britain continues to be slashed, there is a serious danger that its rich cultural landscape could be threatened, and that the arts could become even more of a preserve of theaffluent. It would be remiss to suggest that philanthropy should simply replace the role of publicfunding, but unfortunately in the current context it is becoming increasingly vital. Established figures and beneficiaries at the top end of the British art scene must take it upon themselves to invest in the future of the arts, like in the above examples. If they do not, and public funding evaporates, the type of opportunities that helped them succeed may simply cease to exist.