A radical political activist who arrived in Britain following her expulsion from the McCarthy-era US, Trinidadian-born Claudia Jones is best remembered by history as the mother of Notting Hill Carnival. A journalist, communist, feminist, black rights campaigner and gifted orator, she was also an indomitable figure in the early struggle for racial equality, and worked tirelessly throughout her short life to promote revolutionary politics worldwide.

Jones was born in 1915 in the Port of Spain, Trinidad. Originally known as Claudia Cumberbatch, she was a descendant of the slaves once owned by the Cumberbatch family. When she was eight, her family moved to Harlem in New York. Though her father found work, the family were poor and lived in substandard living conditions; five years after their arrival, Jones’ mother died, and she herself would later contract tuberculosis. Though a gifted student, her illness would cut her schooling short – in any case, as an un-naturalised immigrant woman, opportunities were virtually non-existent. 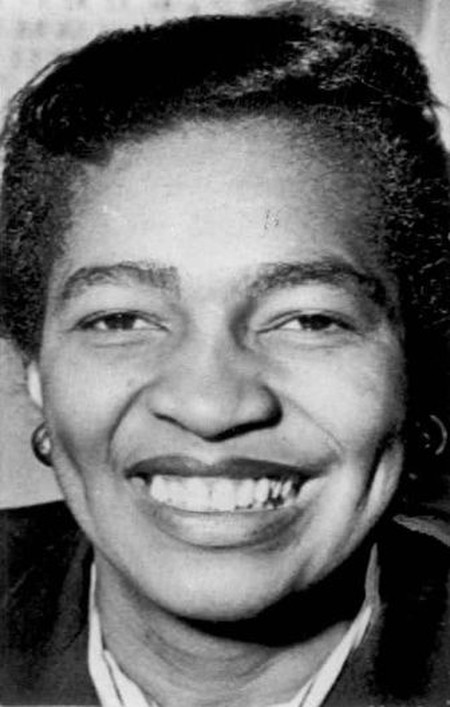 After working in a laundry facility and in retail roles, Jones joined a drama group, and began writing for a Harlem journal. It was thus that a future career in the radical media was born, with Claudia embarking on an alternative pathway to education in political activism. In 1931, nine black teenagers known as the Scottsboro Boys were falsely accused of the rape of two white women in Alabama, and sentenced to death after an unfair trial. Their case was appealed with the help of the Communist Party USA and, in 1936 in the search for organisations that were supporting the boys and fighting systemic racism, Jones joined the Young Communist League USA. A year later, she joined the editorial staff at the Communist Party’s Daily Worker, rising to editor of the Weekly Review in 1938 – where she wrote on behalf of the Scottsboro Boys’ legal defense – and the editor of the Young Communist League USA’s monthly journal during WWII.

Jones would later credit her radical political views as beginning with the death of her mother, aged just 37; having worked as a machine worker in harsh conditions in a garment factory, her death led Jones to ‘develop an understanding of the suffering of my people and my class and to look for a way to end them,’ recognising that the degradation of black communities in America was shared to a degree by the non-black working classes.

Following the Second World War, Jones would become the executive secretary of the Women’s National Commission and the secretary for the Women’s Commission of the Communist Party USA. Jones had a talent for public speaking and community event organising, which she utilised well in her political activism, touring the country to give speeches. In 1953 she became the editor of Negro Affairs, continuing to write passionately about intersectional Marxism, arguing for the emancipation of black women as fundamental to class- and race-based revolutionary politics.

Jones’ skill as an orator and great political aptitude, especially as a black woman, made her a threat to the US status quo during the height of McCarthyism. She was arrested and imprisoned on Ellis Island (within sight of the Statue of Liberty) for ‘un-American activities’ multiple times, greatly exasperating the health problems that had lingered since her tuberculosis – she suffered her first heart attack at just 36, while imprisoned. In 1955, Jones was deported from the US. Originally intended to be sent back to Trinidad, the British Colonial Governor Sir Hubert Elvin Rance objected on the grounds that she may prove troublesome, and she was offered residency in the UK on humanitarian grounds.

C L A U D I A J O N E S What a Woman! Would you believe that this woman's face appeared on a stamp in '72! What face do we have now that represents Black female power? #activist #claudiajones #blackpower #inspiration #rehearsals #actor

Undeterred, Jones immediately threw herself into activism in the UK. Though British communists were not particularly welcoming to black women, Jones got involved in the struggle of London’s West Indian community. By 1958, she had founded the West Indian Gazette and Afro-Asian Caribbean News, which she edited and ran above a barber’s in Brixton. It was the UK’s first weekly black newspaper, and was crucial in her efforts to organise the black British population in campaigns for equal rights in employment, education and housing, and access to the welfare estate and services, raising black consciousness and arguing for an independent West Indies.

Racial tensions had been growing throughout the 1950s, following an influx of West Indian migrants, who came to fill the post-World War labour shortage. Notting Hill and Brixton in particular attracted concentrated numbers of immigrant communities – as desperately impoverished, overcrowded areas filled with slum-condition housing anyway, racism was easily stoked among the white-working classes by fascist groups. The situation escalated with the Notting Hill Race Riots and frequent attacks and even murders of black men by white, the very same year Jones founded her paper. It was then that Jones had the idea of holding a carnival to celebrate Caribbean culture, and ‘wash the taste’ of Notting Hill out of the black community’s mouths. 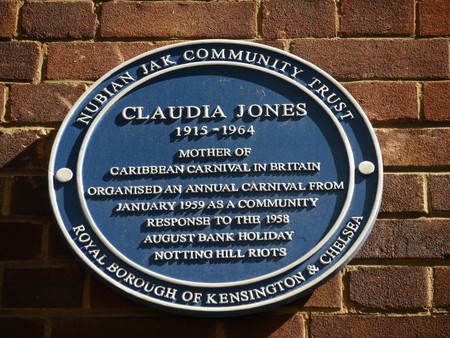 In January of 1959, the first Caribbean Carnival was held inside St Pancras Town Hall, and televised by the BBC. Celebrating the spirit of Mardi Gras, for which her city of birth and many others were famous, the carnival featured calypso music, steel bands and a grand finale jump-up; it was followed by several other indoor Caribbean cabarets, organised by the West Indian Gazette. Though, strictly speaking, this may not have been the first Notting Hill Carnival – Rhaune Laslett is now considered to have organised the first event from which today’s carnival grew, in 1966 – it set a precedent for the celebration of Caribbean culture through public events, and was inspired by the same anti-racism trajectory that would lead to the creation of the Notting Hill Carnival.

Jones died on Christmas Eve in 1964 at the age of just 49, having suffered a heart attack brought about by heart disease and tuberculosis. Though her funeral became a large political occasion, her grave lay unmarked until 1984, when the Afro-Caribbean Organisation in King’s Cross raised funds to buy a headstone. She is buried in Highgate Cemetery, in the plot to the left of Karl Marx. 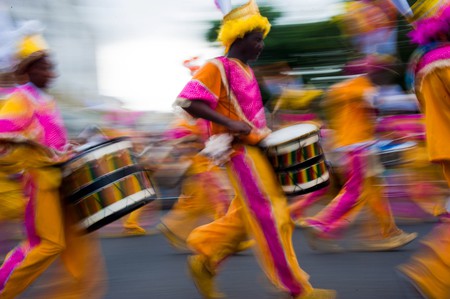 Drummers at a Caribbean Carnival | ©Mstyslav Chernov/Wikicommons
Give us feedback