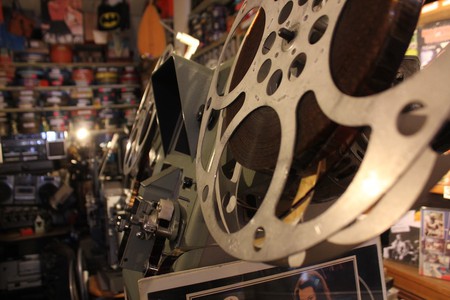 Umit Mesut stands on the stage before a small crowd in the back room of the Memorial Order of Tin Hats (an ex-servicemen’s club) in Hackney, East London. With his shoe-brush moustache, broad spectacles, and a single, stubborn coil of grey hair in the center of his head, the self-proclaimed Cypriot Cockney cuts an eccentric figure. Behind him is a dimmed projection screen, awaiting the light that will bring it to life. He is the only person in the room who has the knowledge to do it.

“I like digital, but, please, don’t call it film,” Mesut begins. “Film has been around for over a hundred years, but now [it] is going the way of the dodo.”

The Bert and Ernie of film

Mesut is the projectionist at CINÉ-REAL, a non-profit 16mm film club established by producer and celluloid enthusiast Liam Saint-Pierre. When the idea struck Saint-Pierre to reinvigorate film projection, he knew he would need an expert. Who better than Mesut? His nearby film emporium, Umit & Son, has for over 30 years been a supplier of rare film paraphernalia, from Super 8 reels, to projectors and collectable merchandise. Five years on, Saint-Pierre and Mesut are to London’s film projection scene what Bert and Ernie are to Sesame Street. 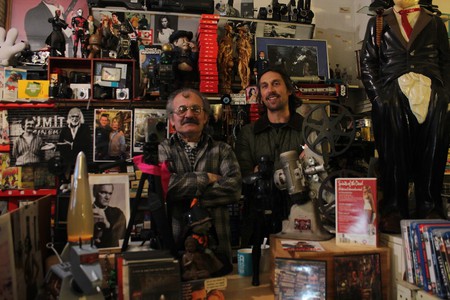 Under the rubric “Keeping film projection alive,” the duo put the whirr of mechanics back into the moviegoing experience one Sunday a month. On the night I visited CINÉ-REAL, they were showing the Michael Powell and Emeric Pressburger’s A Matter of Life and Death (1946)—all 4,800 feet of it.

First, Saint-Pierre introduces the club and the film’s title. Then Mesut tells the movie’s backstory, presents raffle prizes from his shop’s supplies (tickets for which come free with the evening), and throws in some well-rehearsed jokes. Seconds later, the film’s first reel spins into action, speckles of light flicker across the screen, and we are absorbed into a cinematic time capsule.

A Matter of Life and Death mixes colour and monochrome sequences. For many among the under-30s in the audience, CINÉ-REAL is their first encounter with Technicolour on the big screen. According to Mesut, they have been missing out.

“Although digital is getting very good, it can’t mimic the colours on this,” he said during his introduction. “What we’re about to watch is on a three-dye film and it gives you colours digital doesn’t.” 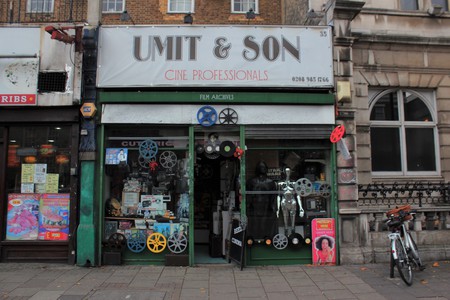 For all its aesthetic charms, projected film no longer galvanises the public’s attention the way it once did. A month after my first visit to CINÉ-REAL, I walk into Umit & Sons to find Mesut and Saint-Pierre discussing the expected closure of London’s Cinema Museum in Kennington.

“It’s a crying shame,” Mesut says. “Cinema’s ruined. I used to run a Turkish cinema screening night for the Turkish, Kurdish, and Cypriot community in East London. It brought everyone together, but the cinemas I used to do them in have shut down now.”

Ciné Real is not exempted from the struggle of projected cinema to survive the advent of digitally projected movies and the emergence of online streaming services. While the film club retains its fan base, it hangs on desperately in the climate of ease and convenience created by the Netflix era.

“I’m not going to lie,” Mesut admits. “It’s difficult to get bums on seats. It’s not about the money. I love what we do, but you can’t [pay for] it out of your own pocket.” The situation is such that CINÉ-REAL is low on the agenda of venues like the Memorial Order of Tin Hats, which must consider their own survival in hard economic times. As a result, Saint-Pierre finds himself on the lookout for other suitable local venues. 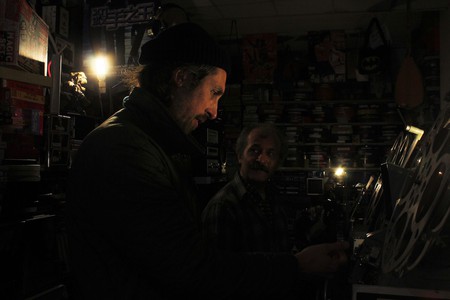 As he explains this, Mesut becomes rueful. “My massive dream was to rescue a cinema and sell tickets for a pound a film, but it’s not possible. I’ve given up on that dream now.”

But the one thing Mesut will never relinquish is his passion for pure film. Fifty years have passed since he first walked into his grandfather’s cinema café in the village of Lefka, Cyprus, and fell in love with the turning wheels and shining lights in its projection booth. “The greatest lesson my grandfather taught me was that it’s not what we look at but how we look at it,” he says.

To look at the world through Mesut’s eyes is to look at a world built on ingenuity and dedication and brimming with the potential of “lights, camera, action!”