Burritos You Have To Try In London 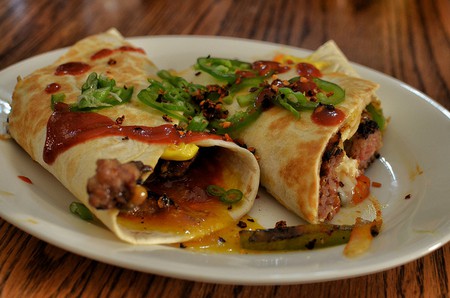 Mexican food is growing in popularity in the UK and you can now get some delicious meals, particularly in London. We went on the hunt for top-notch burrito bars across the capital; here are some of the must-trys. 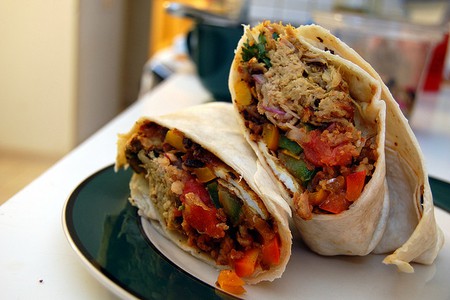 Daddy Donkey‘s burritos are not only some of the best in town, they were in fact the first in town. Founder Joel Henderson studied in Mexico and spent most of his time eating street food there. On Joel’s return to the UK he and his business partner Sergio opened their first Mexican food stand in London. In 2013 the first Daddy Donkey restaurant opened, tucked-away in Leather Lane, Holborn. Firstly you select a type of burrito (Daddy D, Kick-ass, Fajita or Naked) then come the fillings of shredded beef, chicken, carnitas, steak and vegetarian. For maximum Mexican pleasure top your burrito with varying salsa flavours such as medium chunk corn, hot smoky chipolte or hot chile de arbol salsa. To wash it down, a guacamole shot will tick all of the burrito boxes.

Keeping to street food origins, Luardos has been serving the ‘best hangover cure’ burritos in London since 2006. Indulge in a Luardos carnitas burrito with habanero hot sauce and guacamole; these burritos can be found situated on Whitecross Street, King’s Cross and Berkley Market. Luardos believes quality is all in the ingredients so they work closely with suppliers to ensure the raw materials are top notch. 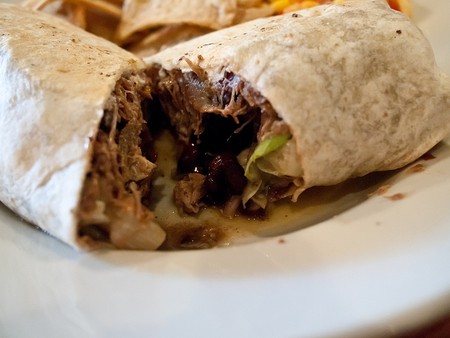 Freebird Burritos gives you Mexican lunchtime bliss in three easy steps: pick the meal, pick the meat and add a healthy helping of salsa. A mere fiver will have you full to the brim with southern BBQ burrito; stacked with smoked brisket, cooked over mesquite wood for 12 hours before slow cooking, dicing and mixing with BBQ sauce. You can suit your own spicy threshold and ‘flavour your feast’ with their chilli indicator; we suggest the smoky medium to allow your burrito’s true flavour to remain.

Benito’s Hat takes its name from the 19th century Mexican politician and his liking for eccentric hats. Founder Ben Fordham returned from time spent in the US to question why Mexican food was so under-represented in the UK. A chance meeting with head chef, Felipe Fuentes Cruz, saw Ben share his passion for the culinary culture of Mexico. The two have since crafted a fresh menu that brings alive the best of Mexican food and drink. Benito’s Hat prides themselves in their diners savouring a rich Mexican experience. We recommend the chipotle grilled chicken burrito with a side of chipotle coleslaw with pomegranate seeds. Margaritas are a burritos best friend so why not compliment your dish with their frozen blend? 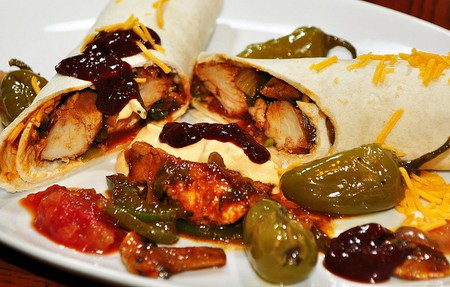 What began as a gastronomical quest to Mexico City, Chicago, Los Angeles and San Francisco saw co-founders and ‘Mexican missionaries’ Eric and Dan bring their findings to London. Meeting fellow foodies and street vendors on their travels, the influences are reflected in their vibrant burrito house opened in 2007. Chilango delivers ‘a stampede of Mexican flavours’ while introducing new tastes to their menu. Try the prawn, pinto beans and basil crema; the fragrant and lighter fish option leaves you with a satisfied belly and space for a side of their super nachos.

The place to scoop your favourite organic treats, Whole Foods Market is a well-kept secret for burrito brunching in the capital. Their High Street Kensington branch dishes up an American super-sized, high-quality pulled pork burritos served with lashings of salsa and fresh rice.

Restaurant, Mexican, $$$
Facebook
Email
Twitter
Pinterest
Copy link
Share
Wahaca‘s inspiration comes from the markets of Mexico and its flavours are well represented throughout their menu. Co-founder Thomasina Miers explains that they ‘try hard to match the flavours of Mexico with ingredients that we can get hold of to create a constantly evolving, seasonal menu.’ All day grazing is acceptable when devouring Wahaca’s creamy rajas burrito; chargrilled poblano peppers, spinach, corn and feta.

Tortilla brings a dose of California to Canary Wharf. Californian natives, Brandon and Jen, roamed London in 2007 only to find its burrito scene lacking authenticity; both grew up visiting taquerias in the Mission District of San Francisco. The birth of Tortilla has since given London the ‘best quality burritos and tacos this side of the Atlantic’. Tortilla is not a franchise, even though it was built from the ground up by a formidable team, but it does have branches in most corners of the capital. No matter which one you visit, don’t miss their barbacoa burrito; grass-fed British Isles beef marinated in Tortilla’s mellow adobo and then shredded. Tortilla offers a messy Mexican meal that will linger in your memory.

Poncho 8 co-founder Frank Yeung wanted to bring the popularity of burritos to London after recognising their significance to the US food scene. He quit his job and set up Poncho 8’s first shop in Spitalfields. The ‘Mexican made fresh’ establishment now boasts five branches around London. Poncho 8 also provides city workers with healthier lunch options (nutritional values are available online). The spicy pork burrito here is marinated in juniper berries, bay leaves and fresh oregano before slow cooking to perfection. You can take a dose of Poncho 8 home and try to recreate their magic with branded chilli sauce available from Kensington department store Harvey Nichols in a variety of flavours; garlic, super hot fuego (‘fire’ in Spanish) and smoky medium.

Founder, Mahesh Raikar, quit his job at a fortune 500 company to develop his passion for Indian and Mexican food. The ‘Indian burrito company’ first opened its doors in Birmingham, UK and was rapidly catapulted to success with a branch in Soho, London. Wrapchic‘s fusion of typical Indian ingredients (cheese in a tikka sauce or mint and coriander chicken) in a tortilla wrap will blow you away. We would happily eat their mutton madrasi burrito every lunchtime.