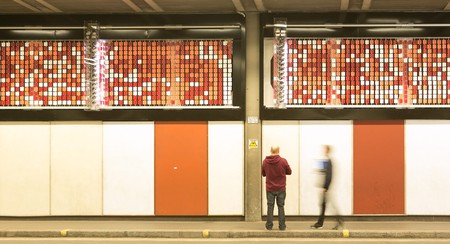 Multidisciplinary designer Jason Bruges has become synonymous with experiential, groundbreaking installations. His latest artwork, Brutalist Tapestry, is inspired by London’s iconic Barbican Estate, hacking the nearby Beech Street tunnel with a kinetic, digital artwork that not only engages the public, but also acts as a “catalyst for change”.

Culture Trip: How did the idea for Brutalist Tapestry come about?

Jason Bruges: We were asked to create an intervention around this area and we looked at the Beech Street tunnel as an opportunity, as it’s smack-bang between the tube station and the Barbican Estate. It’s sat in a pretty unloved environment, which meant we could test a lot of things and wouldn’t come up against a lot of resistance. 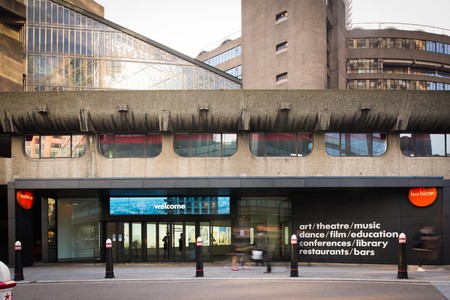 We went on the Barbican’s architectural tour, which was fantastic, and at the end of it we were taken into a loading dock and down this little corridor where we came across a two-storey curved wall that’s hidden away from the public. It was covered in all these different samples of various types of concrete and aggregate, and we thought, “This is amazing!” It revealed the sheer amount of craft that had gone into the brutal part of the architecture that makes up the Barbican. Thousands of craftsmen came over from southern Italy and other parts of Europe to work on the building, using bush hammers and pneumatic tools to create its distinctive, textured look. The entire estate was done by hand and we were fascinated by it. We thought, “Could we create some kind of dynamic texture in the tunnel that responds to this sample wall?” 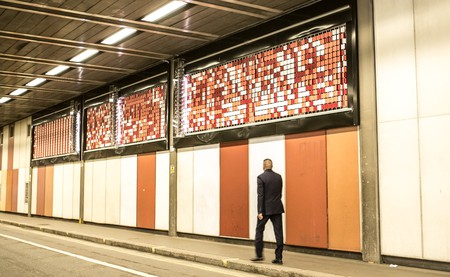 CT: How does Brutalist Tapestry work?

JB: We built these robots that could crawl across the surface and “hack” the cladding, turning it into a living, breathing thing that will constantly evolve, displaying images and text. People will be able to upload a photo on Instagram using the hashtag #Brutalisttapestry, and it could appear in the tunnel later that day – essentially the public become involved in curating the tunnel.

We also hope to give passersby an insight into what’s happening live in the local area around them. The tapestry is choreographed by our team and the Culture Mile staff, so we’re talking to curators from different institutions in the area to find out what events are going on. For example, we’ve taken recently recorded tracks from the Barbican-based London Symphony Orchestra and created something similar to a musical notation that will appear in the tunnel. We’ll also be using a sequencer to actually play what’s in the tunnel, so in theory you could have a musical performance in there and the artwork will respond to what’s happening.

CT: What are your long-term hopes for the project?

JB: People were originally meant to navigate the Barbican via the upper gardens and the upper walkways. It’s not exactly a pleasant environment and we want people to think about that – hopefully the tapestry can act as that catalyst for change. I know the City of London is looking at alternative ways of getting around the city and improving the quality of the environment. You’ve got the new London Wall Place development, for example, that has reintroduced these beautiful elevated walkways over the roads [an original plan called the City of London Pedway Scheme sought to separate pedestrians from street-level traffic in the 1960s]. 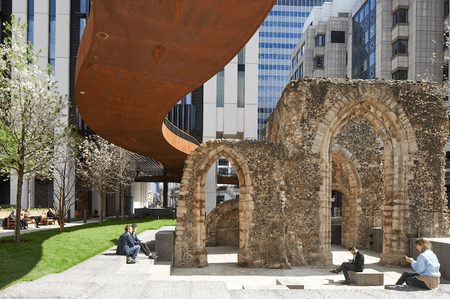 CT: Which other London landmarks have you worked with?

JB: We’ve worked on London Bridge, Tower Bridge, Great Ormond Street Hospital, the Shard and 10 Downing Street. With the last project we were commissioned by the Great Britain campaign to create a temporary front door for Number 10 to celebrate creativity and technology coming together. We thought, “Wouldn’t it be great if the door could be see-through?” So we built a timber door out of tulip wood, the same as the original, that enables you to actually see when someone casts a shadow behind the door, kind of like a digital pin-cushion. It’s travelled the world and now sits in the government’s art collection.

DigitalDouble from Jason Bruges on Vimeo.

We’ve also worked on the Natural History Museum’s Life in the Dark exhibition to create three different immersive environments that explore the worlds of nocturnal animals. One of them plunges you into the deep sea where you encounter all these creatures you’ve never seen – angler fish, vampire squids, marine snow – and you can see how they all communicate in the pitch black through bioluminescence. It was amazing working with the scientists at the museum to come up with these theatrical techniques to demonstrate what it’s like to be in a volume of deep sea.

Life In The Dark from Jason Bruges on Vimeo.

Find out more about the project here and see more of Jason Bruges’ work here.