Bringing Art to the Masses With Art on the Underground 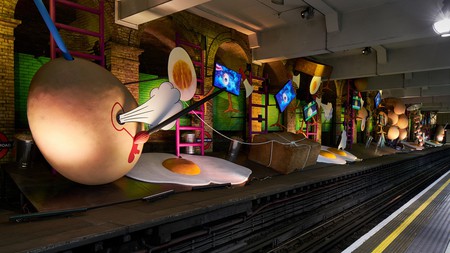 Art on the Underground has unveiled its new commission by Heather Phillipson. Here, we take a closer look at one of London’s largest public art initiatives, which has displayed artworks throughout the underground network for over 15 years.

Next time you’re travelling through Gloucester Road station, be prepared to encounter a bizarre land of giant eggs and kitchen utensils, punctuated by computer game-esque videos. Pitched as the most ambitious project in Art on the Underground’s history, Heather Phillipson has transformed a disused platform with an immersive sculptural and video installation, my name is lettie eggsyrub (2018).

“The title comes from the last line of a poem by British poet Tom Raworth. It’s got this real element of surprise and it’s absurd,” Phillipson explains. “I’m really interested in absurdity and how it might sit within the comic and the tragic.” 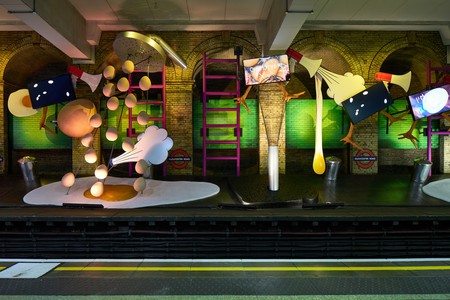 As the artist’s first public commission in the UK, Phillipson has taken full advantage of the expansive 80-metre platform to explore how we as humans interfere with egg production. “The egg is something that is this conflicted being,” Phillipson says. “It’s non-gendered, it hasn’t come into being, it’s this promise of something that is about to happen. Obviously the actual egg, the hen’s egg, is very much an object that is under constant threat.”

“It’s a complex work,” says Eleanor Pinfield, head of Art on the Underground. “It’s about the familiar and the unfamiliar and how we as a society sort of relentlessly follow these consumption patterns of eating and living and ignoring what is happening to the world around us.” 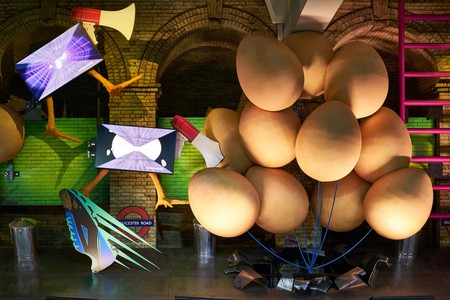 Phillipson, who will be taking on another public art commission in 2020 with the Fourth Plinth in Trafalgar Square, has transformed the platform with her absurd installation. “I was really keen that the work looked like it was part of the architecture, forced into it somehow,” she states. “I got caught up in the system of the underground, thinking about the subjectivity of bodies within the network. And I wanted the work to be a really huge proportion, so the role is reversed and as the human we are dwarfed by this other creature.”

Since 2000, Transport for London (TfL) has facilitated and funded Art on the Underground (formerly Platform for Art), which displays permanent and temporary artworks, installations and interventions within the fabric of the Tube network. From disused station platforms to ticket halls, a wealth of international artists have been invited to create works that enhance passengers’ daily commute and change how we experience the city.

“What we were particularly interested in responding to was reframing and bringing these female voices out,” Pinfield tells Culture Trip about the approach of working exclusively with female artists for the 2018 programme. “We know there is a disparity in the arts and certainly when you look at public art it’s almost always made by men. What I’m intrigued about it is what happens when you take this different lens.” 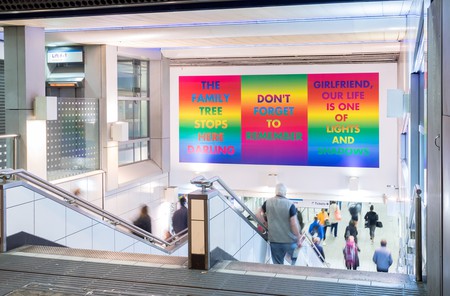 David McDiarmid, 'Rainbow Aphorisms', 1994. Commissioned by Art on the Underground in 2017 | © Benedict Johnson

Even though Gloucester Road has been the longest-running location of the programme, Pinfield is keen to use new spaces throughout the network. The header wall as you enter Brixton station will become the site for a new curated series of works that engage in the area’s wider public context.

The Nigerian-born, Los Angeles-based artist Njideka Akunyili Crosby is the first artist to take on the new programme. Known for her work that explores cultural identity, Crosby will be looking closely at the local community. “We’re excited to see how she will respond. We’ve asked her to bounce off the Brixton murals and how they really capture collective memory,” says Pinfield.

The way in which the new commissions reflect an international perspective is very key to the success of Art on the Underground. Pinfield is mindful that around 40% of people living in London weren’t born in the UK, and therefore to represent the city you need diversity within the artists you work with. The 28th edition of the pocket map cover has been designed by Romanian nonagenarian artist Geta Brătescu. “Geta would be a difficult artist for us to work with on other types of projects, but with the pocket map it can be a really beautiful way of bringing art to millions of people,” explains Pinfield. The custom maps are so successful that when a new edition comes out, people email from all over the world asking to be sent one. 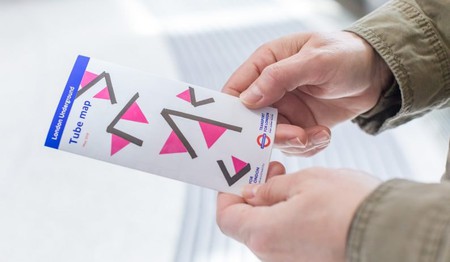 What started as a way to re-engage vacant, unused spaces on the underground, such as intermittent projects on the empty platform at Gloucester Road station, has today become an internationally acclaimed art programme. For the 150th anniversary of the Tube in 2013, a new direction was adopted towards permanent works when British artist Mark Wallinger created Labyrinth (2013). “That was another de-centred approach to a permanent artwork I suppose,” asserts Pinfield. “There’s 270 works in every single station and they are staying there. It captures a moment in time because if we build any more stations obviously they wont have one.”

Labyrinth is the perfect example of how a series of public art interventions has captivated Londoners and tourists alike, so much so that they purposefully seek them out. “It’s an incredibly successful work because people who have hunted them down tweet us every weekend. They have their own clubs. That’s a beautiful sense of ownership,” says Pinfield. The public even get in touch if a work has been tampered with. “They’ll tell us if someone has stuck a sticker on one. It shows that people really care and what it means to those communities.” 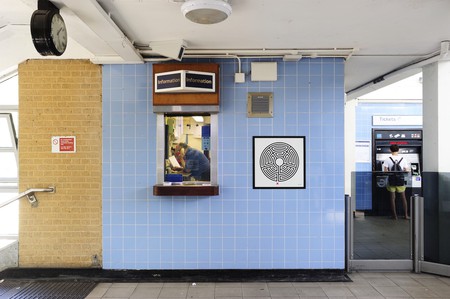 This “sense of ownership” that the public feel towards the art throughout the Tube network became paramount when the Sir Eduardo Paolozzi mosaics – all 950 square metres of them – at Tottenham Court Road had to be partially removed for the station’s £400 million refurbishment. There was public outrage when it was believed that the mosaics were being destroyed and an online petition was signed by more than 8,000 people calling for them to remain. “There was a perception that everything was lost and to me the outpouring shows how much people care and how important it is for us to communicate in TfL these sorts of aspects to the public. I could imagine at some point in the future there will be challenges of works we’ve created.” 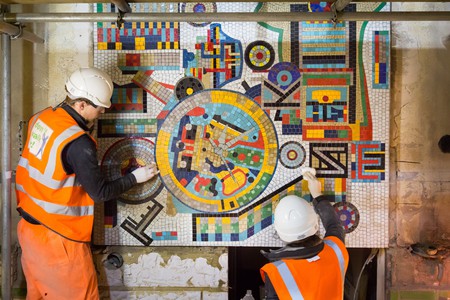 Pinfield reassuringly addresses this by saying all the right people were involved from the beginning, including the Paolozzi Foundation and Daniel F Herrmann of Whitechapel Art Gallery, who curated the gallery’s retrospective of the innovative Scottish pop artist in 2017.

Although works such as Paolozzi’s mosaics were intended to be permanent (only 5% of the tiles were actually moved), modernisation and development of the Tube service means that preservation of future commissions and their adaptability is a consideration. “I think any responsible curator when they are working with artists needs to understand that this is an underground network and it’s not going to stay completely static,” says Pinfield. 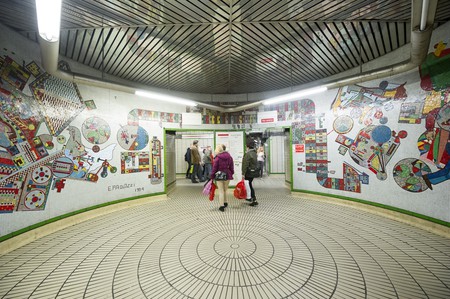 When the next challenging scenario will be is of course unknown, but the underlying respect and consistency to the approach to commissioned works means that TfL’s heritage of working with artists is preserved. “Because you’ll see the relationship of working with artists goes back before 2000 with Sir Jacob Epstein, Henry Moore and Eric Gill at 55 Broadway (London Underground’s headquarters above St James’s Park station). There is an amazing legacy and it’s about protecting it beyond our existence. What there isn’t, which would be an interesting model, is that in every modernisation process there is the assumption at the outset that there will be a piece of art. That would be fun.”

Whether you’ve collected every map since Gary Hume’s first one in 2004 or are transfixed by the complex patterns in Jacqueline Poncelet’s Wrapper (2012) at Edgware Road station every morning on your way to work, Art on the Underground has mapped out a dynamic and unique array of artworks for our daily pleasure.

“There is something you can look out for that is new, different, interesting, engaging and beautiful,” explains Pinfield. “We have to be of the moment, and that is what will make what we’re doing interesting to people in 50 years time. London Underground has always been avant garde in that way, which is what is so exciting about it.”

Heather Phillipson’s myname is lettie eggsyrub will be at Gloucester Road station from 7 June 2018.

Want to see more art in London? Here are the art events we’re most excited about in the city.