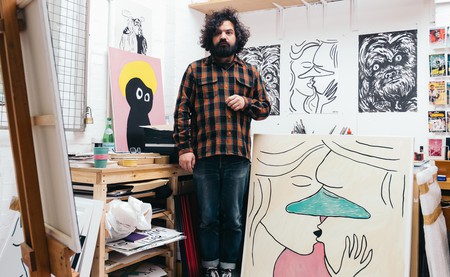 Most Valentine’s Day cards are syrupy sweet and unimaginative, so it’s refreshing to see cards with bold statements like “It Hasn’t Got Boring Yet,” “I Love the Obligation You Have Become”, and best of all, “I’m in the Bush Outside and I Really Love You.” These darkly humourous cards are the work of Babak Ganjei, a London-based artist and musician, and owe much to Ganjei’s family ties.

“Though I was born in England, my parents are both Iranian. Even though I don’t speak the language very well anymore there is a very specific sense of humour and delivery that’s unique to Iranians, which I think comes through,” he says. It’s a nice example of a meeting between cultures, as the bluntness and honesty of the cards evidently also appeal to Londoners’ dark sense of humour. 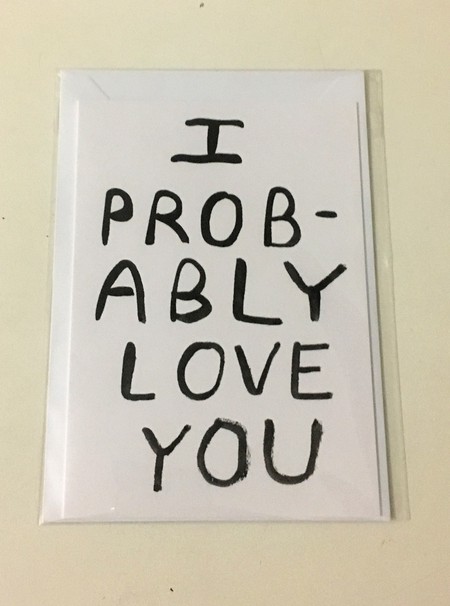 Babak Ganjei started drawing the tongue-in-cheek Valentine’s Day cards about four years ago at an art market in London. At first he wrote the cards at the event itself, since he wasn’t sure how many he’d sell. “Now I do them in ink in my studio. I’ve also done Christmas cards and that’s a more lucrative market, as you need a lot of Christmas cards to send to people. You only really need one card for Valentine’s Day, unless you’re some creep who sends out 20 of them,” Ganjei says.

In a way, Ganjei says, it’s strange that his Valentine’s Day cards sell, since they’re really about him working out what he wants and expects from a relationship. He’s not a massive fan of the Valentine’s Day card industry, though he admits to being a sucker for rom coms. “In general, I have a bad attitude towards these things; I’ve pretty much been single since breaking up with my kid’s mum, so I haven’t really dated anyone for 10 years,” says Ganjei. But the honest tone of his cards has clearly struck a chord with people who want Valentine’s Day to be less about pressure, and more about showing your beloved that you have a sense of humour. 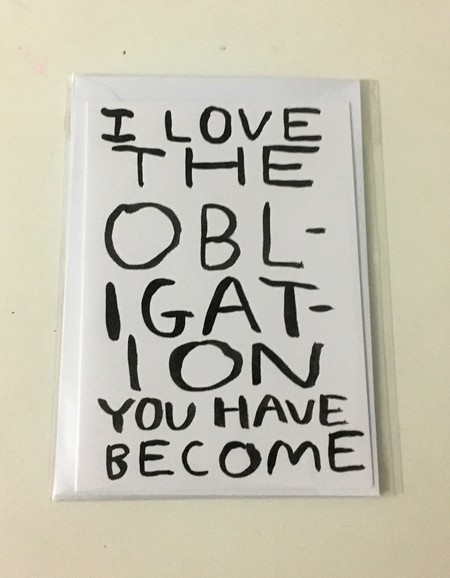 Ganjei was born in Essex but grew up in London, before his family moved to Bournemouth when he was a teenager. As soon as he turned 18 he moved back to London and went to legendary art school Central St Martins, and he thinks London has had a massive influence on his art. “I’ve always thought of cities as the places the freaks and weirdos are meant to congregate, and I don’t like it when artists are being priced out of the city. I’ve always felt part of the challenge of an artist to survive the city – it means you have to keep creative and find ways of making something from nothing.”

The card idea has evolved since he first came up with it, and the “I’m in the Bush Outside” card, among others, has also been turned into a handwritten poster and a silk-screen print. “If something’s working, you don’t question it; I made 100 handwritten versions and they all sold,” Ganjei says. “For a long time they were my only source of income.” And the cards themselves continue to be popular. “The bestsellers are “I’m in the Bush Outside and I Really Love You”, “A Strong Feeling of Emotion”, “I Love My Perception of You” and “It Hasn’t Got Boring Yet,” Ganjei says. “I also made a card that says “I Regret the Divorce” – and somebody bought that.” 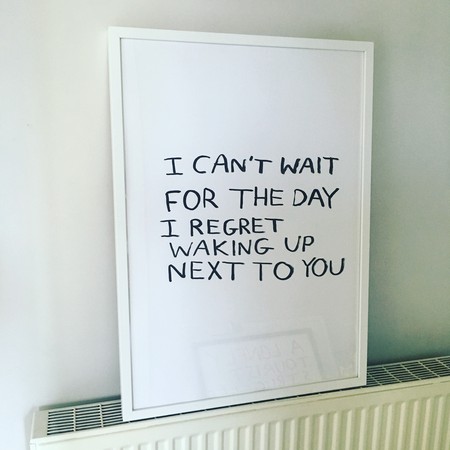 Babak Ganjei’s exhibition Everything Is Really Bad And It’s Only Going To Get Worse And This Is The Most Perfect Time is at Atom Gallery, London on March 2-23.