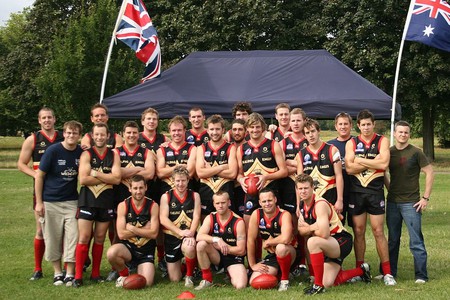 While it is not all that shocking to find out that Australian rules football, or Aussie rules – or even just ‘footy’ – has been played in Australia since the early-to-mid 19th century, perhaps more surprising is the fact that it’s introduction in Great Britain wasn’t too far behind.

For those new to Aussie rules, the sport is a tough, physical game played with both the hands and feet. While it’s popularity is huge in Australia, it’s participation outside of the country is somewhat limited. London, however, is one place outside of the sport’s home nation flying the flag.

In 1888, English cricketer Arthur Shrewsbury arranged for a British rugby team to tour Australia, which saw them playing a gruelling 54 matches in 30 weeks. More than half the games were rugby matches, but, as the tour progressed, the team were also taught Aussie rules by their hosts. Shrewsbury’s hope was to invite an Australian side to return the favour and tour Britain. Edinburgh University had already set up an ‘Edinburgh Australians’ side, and the plan was for them to head south and play the visiting Aussies in exhibition matches. Sadly, the whole thing fell apart when the Australian side pulled out.

Had Shrewbury’s plan gone ahead, Aussie rules could have built on its primitive popularity and changed the history of the game overseas. It may have affected the rules of the game, as well as those of football and rugby, influencing how each one was played during its respective infancy. When the Football Association (FA) was established in Britain in 1863 it’s ruling on ‘hacking’ (kicking opposing players in the shins) and holding the ball by hand were some of the key differences that caused an official parting of the ways between football and rugby.

In 1921, Oxford and Cambridge universities played their first Aussie rules varsity match. The game is still played to this day and has become the longest-running AFL fixture outside of Australia.

The development of the game in this country has struggled beyond small competitions – such as the Oxbridge varsity game – and small local leagues. It wasn’t until 1989 that the British Australian rules football League (BARFL) was formed. The BARFL has since merged to become AFL London.

There are now eight Aussie rules clubs in London, in addition to nearly 30 teams based around the rest of the country.

The bulk of teams, unsurprisingly, reflect well-known areas of Australian communities in London. There is a hefty focus on south-west London, with likes of Putney, Wandsworth and Wimbledon all being represented. The healthy amount of Australians living in England’s capital has lead to AFL London becoming one of, if not the, best Aussie rules organisation outside of Australia.

AFL London, having started out as an eight-team league in 1990, now operates across a three-tier structure, with Premiership and Conference levels, supported by a Social division. There is also a two-tier women’s competition, with four sides in each division.

Want to play Aussie rules or find a club to join in London? Head here for more information.