An Introduction To Sade In 10 Songs 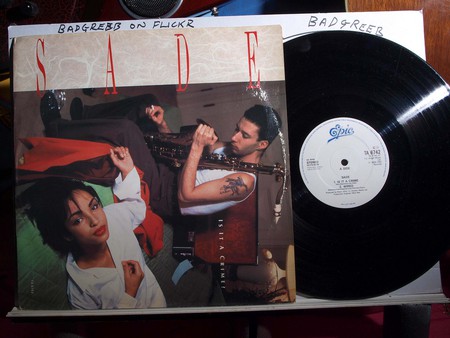 Pop and soft rock of the ’80s nowadays can sound dated, to say the least. In fact, it’s pretty hard to find anything from the ’80s that doesn’t obviously sound like it’s from the ’80s. Timelessness hasn’t exactly been pop culture’s biggest concern, but occasionally we manage to find those select artists — artists like Sade — that strike a perfect balance of commercial appeal and lasting artistic integrity. While the world was paying most of its attention and money to glamorous, larger-than-life pop divas like Whitney Houston or Janet Jackson throughout the ’80s and early ’90s, Sade was coolly scoring quadruple-platinum albums and regularly sold-out tours. Yet still, when we think of huge pop idols of these times, Sade’s name doesn’t usually come up immediately, so here are 10 songs to prove why she should.

Sade’s sound has always danced between an acute pop sensibility and sprawling atmospheric tangents, and ‘Hang on to Your Love’ is one of their best representations of the former. Even coming from the very first album, the songwriting chops are apparent; the bass grooves throughout with a classic ’80s-chic, almost like a more tasteful alternative to the kind of sounds that dominated the pop world. Over this urgent and funky composition, Sade Adu’s signature silky-smooth voice glides elegantly over the instrumentation, effortlessly breathing an unmatchable cool into the love the song evokes.

While the band has always been outstandingly successful, Sade did always have a specific sound pulled from Afro-Cuban and Latin American traditions, making their sound a little less accessible, but all the more rewarding. ‘Smooth Operator,’ Sade’s first huge hit, manages to pull off bongos, warm organs, and claves as an instant pop hit that will inevitably get stuck in your head the moment you hear that chorus.

‘No Ordinary Love’ presents Sade in their more intense, unsettling side. The song stretches across seven and a half minutes, and doesn’t really expand far beyond the initial groovy bass and drums, but the amazing thing about it is that it doesn’t really need to. The song creates such a thick tension – the chugging eighth notes of the distorted guitar in the pre-chorus, the filling synths, and the lyrical exploration of infatuation and heartbreak – it keeps each minute feeling like it could erupt at any second.

No matter how much the band’s music has varied over the years, ‘The Sweetest Taboo’ is excellent proof of Adu’s ability to turn any Sade song and make it completely her own. Her voice jumps from her warm tenor into crisp, delightful falsettos as saxophones ring out in the chorus. Both the guitar and bass slap and swing all over this song, and paired with the brilliantly executed restraint of the keyboards and marimba, it gains both a certain eloquence and sensual edge.

Coming from their artistic and commercial apex, ‘Pearls’ is an incredibly important song from the band’s catalog. This swooning, utterly heartbreaking number contemplates poverty, suffering, intercultural disconnect and perseverance. The dense, tragic string arrangements entangle you and draw you so deep into the despair and struggle of Sade Adu’s ponderings, and makes you so reflective on the concepts of privilege and materialism, the end feels like an abrupt awakening. Songwriting this captivating doesn’t come around nearly enough.

One of the more overlooked tracks on the stellar Promise, ‘War of the Hearts’ sees Sade playing a game of contradictions, to fantastic results. The instrumentation sounds like an incredibly intelligent, expansive, almost proggy atmosphere filled to the brim with interesting key changes, progressions and masterful soloing. Meanwhile, Sade Adu likens codependence, emotional toxicity, and heartbreak to a ‘war,’ and draws the mood down into a dark, enthralling place of rage and vulnerability.

‘Jezebel,’ plays to Sade’s political astuteness much in the same way ‘Pearls’ does, but this track deserves recognition for its impressively thoughtful, sensitive examination of prostitution and the condition of underprivileged and systematically abused women. Naming the character after the historically-racist denomination ‘Jezebel,’ Sade does an outstanding job of presenting her female subject in a place of power and self-determinism while exposing the systemic flaws of modern American living, where so many are left to illegal or dangerous ways of life simply because they are denied the possibility of anything better. This song is all the more proof to Sade’s intellectual prowess that so them apart so well from the rest of their ‘soft rock’ or pop contemporaries.

This song is a infectious combination of Sade’s best in an impressive five minutes. While the musicality is arguably far more pop than their previous Love Deluxe, the song still maintains Sade’s empowering thoughtfulness while trudging through the throes of heartbreak and impossible love- ultimately feeling like she is the ‘king of sorrow.’

It’s already been six years since Sade’s comeback release Soldier of Love, but this song is proof that the world could always use some Sade. This song (and album for that matter) juts out completely from the hyper-digitized, dance pop of the the pop culture world at the time, putting on display Sade’s ageless grace and poise. The guitar lilts calmly through all scale of haunting minor progressions through the blanketing, assuaging texture of Adu’s voice, proving once and for all that no one will ever be able to touch Sade’s level of cool.